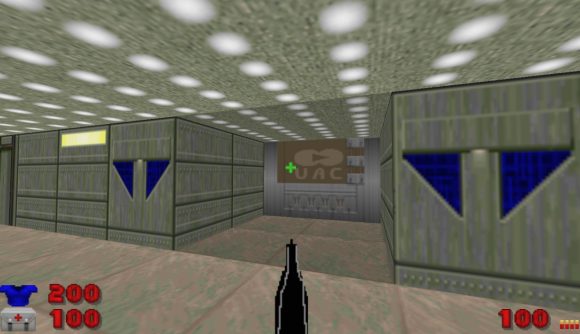 Doom 2 has been out for a long time, and the Doom modding community is still endlessly creative with finding ways to add to, change, or completely remake the classic series of gory FPS games. Other modders have other goals in mind, however. There’s a new mod out called ‘Doom 2 but the guns look bad,’ which replaces all the weapon artwork in Doom 2 with a version that looks like it was made in Microsoft Paint, probably because it was.

‘Doom 2 but the guns look bad’ doesn’t touch anything else in Doom 2, it just makes the guns look bad. Modder TechIguess explains on the ModDB page: “Yup, I literally just took Doom 2 and redrew the weapon models to make them look worse.” If you were to judge the mod by how well it accomplishes the goals the modder set out for it, it’s a smashing success: all these guns look extremely bad.

Take the chaingun, for instance. Normally it’s shown as a series of silver barrels bound together toward the muzzles, with hand-drawn lighting effects showing that it’s made of reflective metal. The modded version looks like an icon for a fence.

I think the rocket launcher is meant to look like a loaded RPG, but it just looks like a flat grey candle. The shotgun looks like someone tried to trace over a silhouette of a black beer bottle with their non-dominant hand.

These guns really do look very bad, and you can download them from ModDB, which is where you can also find many other excellent Doom mods if you’re so inclined.