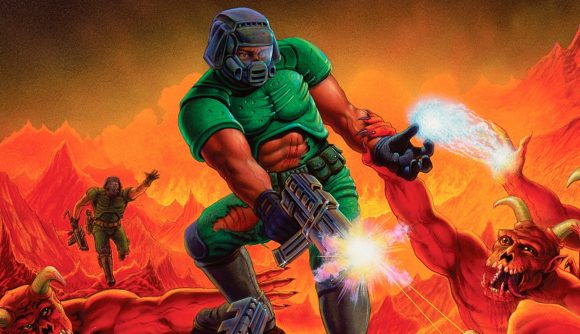 Does 1993’s original Doom take place in 2022? There’s a rumour going round that this is the case, with the evidence pointing to reference material mentioning the first Doom’s setting – however, according to one of the game’s creators, this isn’t the case at all.

It’s now the far-off futuristic year of 2022, and we’re starting to catch up to a lot of older movies, TV shows, and games set in the future. We’ve already passed Blade Runner (2019) and the tabletop game Cyberpunk 2077 was originally based on (2020) – and now, according to internet legend, we’re in the year of Doom.

Supposedly, the original Doom’s storyline takes place in March 2022, which of course is spreading around the internet. The source of this date can be traced back to the manual for the SNES version of the game, which clearly shows March 15, 2022, on the cover. However, this date is not mentioned in the PC version of Doom.

FPS specialist magazine E1M1 took this to the source and asked one of Doom’s creators – designer John Romero – whether the rumour was true and if Doom is set in 2022. Romero confirms that “no, it doesn’t,” and that this is false as the SNES manual wasn’t created by id Software – so is non-canon. Doom is not set in 2022.

"No, it doesn't. That was the SNES manual that we didn't write." — John Romero

We consider this myth BUSTED. pic.twitter.com/rJkbM7Erwr

So that rumour is officially put to rest, although we’re only four years away from the Doom movie at this point. As for John Romero, he’s currently working on a sequel to his epic Doom mod Sigil, which will be released as a mod for Doom 2 this time.