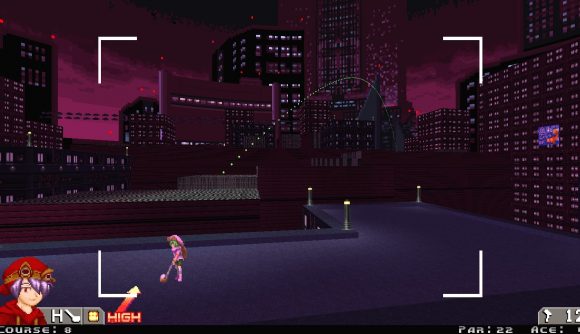 When you think of Doom mods, normally what comes to mind is more blood, revamped weapons, and bigger hordes of demons. Hellshots Golf takes a different tack, though, and turns the aging shooter into a (mostly) peaceful day on the links.

Hellshots Golf is pretty much exactly what it says on the box: it’s golf, but in Doom. Instead of guns, you’ve got a selection of clubs; instead of shooting demons, you have to hit a little ball into a hole a long way away.

There are some key differences between this version of golf and the kind you normally see at the PGA Championship, however. Because this is Doom, you’ll periodically have to smash demons with your golf clubs, and some of the ‘greens’ are in the eye sockets of gigantic skulls floating in lava.

That said, it’s pretty remarkable how golfy Hellshots Golf manages to be, and that’s thanks to help from some of the modern source ports of Doom, like GZDoom and and Zandronum. These transfer Doom into full 3D using OpenGL, which allows Hellshots Golf to give you a full 3D camera with which to track your shots. There are surprisingly decent ball physics, and mercifully, you also get a preview arc showing the path your ball will take with your current club selection and swing.

YouTuber ICARUSLIVE3S has a nice rundown of the features here:

Sadly, the ball is not actually a cacodemon.

The courses are delightfully imaginative, and range from familiar Doom and Doom II levels to skyscraper rooftops and Van Gogh paintings. There’s even a course set inside a refrigerator.

If you’d like to play some relaxing Hellshots Golf, head over to creator TerminusEst13’s itch.io page.

You’ll want to have a copy of Doom II: Hell on Earth installed, plus Zandronum, ZDoom, or GZDoom. If you opt for Zandronum, the mod even works in multiplayer, which opens the hell portal to even stranger shenanigans.