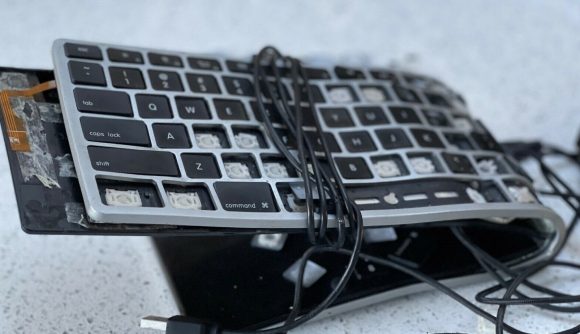 If we’ve learned anything from videogames, it’s that historical artifacts are important. There’s one for sale today on Ebay, although its days of being powerful may be well behind it. It’s a Mac keyboard that Doom creator John Romero smashed into pieces during a particularly inglorious round of Quake deathmatch.

The keyboard is – or was, rather – a “really nice Mac keyboard” that Romero says he had used for coding, emails, and “all kinds of great computery things.” That was up until the “fateful day where intense poundings, screaming, and being obliterated made me lose it.”

The photos that accompany the Ebay listing show a keyboard that has been bent roughly into a U shape, its back panel detached at one end, and with several keycaps missing. The condition is listed as “Destroyed,” and helpfully points out that it no longer works (but could conceivably be used for salvaging parts, we suppose). But the real value of a piece like this is in that very destruction: just imagine, you could own a keyboard that has been personally obliterated by the same hands that made Doom.

In the description, Romero admits that he tends to take out game-related aggression on inanimate objects, although typically it’s not that keyboard “because it’s critical to actually Deathmatching.”

It’s that time of year – spring cleaning! I put some stuff up on eBay, everything from a model Hummer H1 and a Ferrari to an original piece of art to a destroyed Mac keyboard. Click "see other items" to find them all. https://t.co/A1F3vubdLS https://t.co/HjG43L0Osg pic.twitter.com/jG9aE1ezK4

You can check out our favourite FPS games for some of the wonderful things Doom has inspired – but you’ll probably want one of the best gaming keyboards plugged in before trying them out.