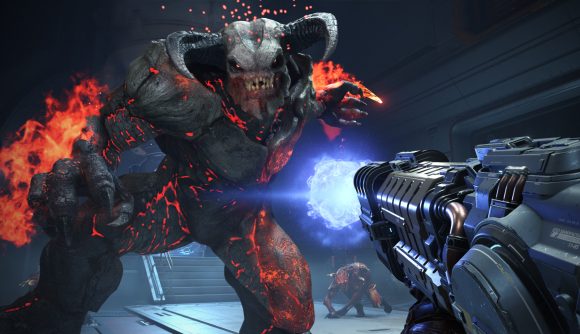 Cloud streaming is proving to be the latest trend around the halls of E3, with Bethesda the latest to jump on the streaming bandwagon with its latest technology: Orion. The technology isn’t a service in itself, rather it’s set to work alongside and compliment game streaming services such as Microsoft’s xCloud or Google Stadia.

We already knew Doom Eternal is set for launch on Google Stadia, it being the poster child for 4K, 60fps gaming on the streaming platform set to turn up in November. But there may be a little more to Bethesda’s streaming efforts than simply games for others platforms, rather, with Orion, it’s introducing an SDK to aid developers implement smooth, cheaper cloud functionality.

According to Bethesda director of publishing James Altman and id Software CTO Robert Duffy, the tech will “optimise game engines for performance,” letting players stream content 20% faster. “This can be put into any game engine, it can be used with any streaming platform to provide a better experience for any consumer playing that game on that platform, and to deliver it at a lower cost for whoever’s serving the data.”

Orion will reportedly cut bandwidth requirements by some 40%, while latency and compute demands are also significantly lowered by 30% and 20% respectively. We don’t yet have all the details on how Orion achieves this, but it will assumedly be some form of integration of the latest encoding and decoding tech into the game engine at a low level.

Bethesda is going to test later this year, offering a chance for gamers to try out 4K60 Doom (2016) for themselves. You can sign up to play over at the Doom Slayers Club.