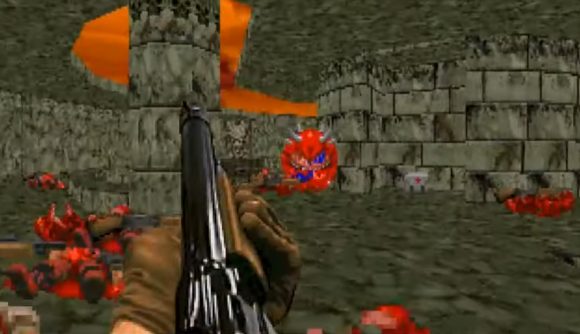 Those of us who are helplessly addicted to Twitter are familiar with the phrase ‘doomscrolling’ – it’s the act of scrolling through post after post about all the awful things going on in the world at a given moment. You can freshen your routine up a bit with the Doomscroll Doom Bot, a Twitter account dedicated to posting a complete playthrough of legendary FPS game Ultimate Doom, one frame at a time.

The bot is posting images pulled from a Longplay Archive playthrough of Ultimate Doom, which can be found on YouTube if you want to watch it in the boring old-fashioned way. Every hour, the account posts a new frame, starting from the end and working backwards, one second at a time.

Since it’s ‘running’ at a single frame per second, you don’t quite get the flipbook effect from scrolling through the posts that are up so far. Right now, it’s still working through Ultimate Doom’s final level, E4M8, which caps off the ‘new’ Thy Flesh Consumed episode it adds to the original set of levels.

Doomscroll Doom Bot was created by Steve Nass and Owen Weeks, a pair of New York-based copywriters. Nass tells us that the bot is for “whenever you’re done sifting through Twitter for the most depressing/terrifying news you can find, and just want to watch demons get shotgunned and chainsawed for a while – arguably a sunnier topic than current events most days.”

There are a total of around 15,700 individual frames to work through for the full playthrough, which will take “a couple years” to complete. Once it’s done, Nass explains that you’ll be able to watch a “speedrun” of the game simply by navigating to the account and holding down the spacebar.