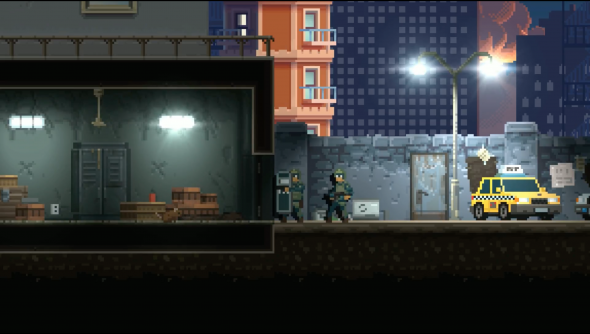 Need more of the best upcoming PC games? We’ve got you covered.

The retro side-scroller is being co-developed by Killhouse and Pixel Shard and promises “old school, door kicking action with retro graphics and retro sensibilities” (thanks, Rock Paper Shotgun).

You can find out what they mean by “retro sensibilities” by checking out the teaser trailer above. It’s okay; there are no spoilers, and – clearly – no rats were harmed in the filming of that video. Can’t say the same for the guys in the riot gear, though…

And that’s pretty much all we know about Door Kickers: Action Squad at this point, beyond the fact it’s “coming soon” to Early Access on Steam. Maybe we’ll find out more at Gamescom, eh?

And no, there’s still no news about Door Kickers 2. It was initially penciled in for a 2016 release, but development woes have pushed it back. Sniff. But ’90s-inspired Police Stories has hit its Kickstarter target and should be out later this year.