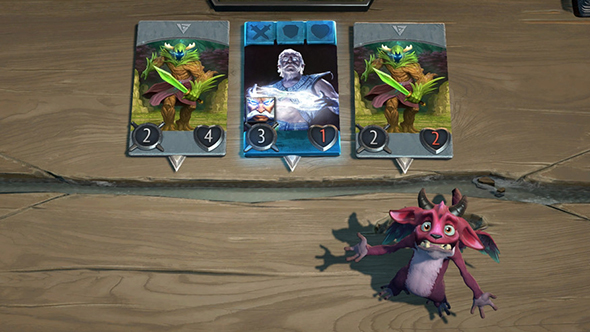 Next time you queue into a Dota 2 match, keep an eye out around the spawn point – you might spot a peculiar-looking table staffed by two mischievous Imps. It’s Artifact, Valve’s upcoming game about Dota 2’s own lore, appearing in the actual game!

Dota 2 personality Wykrhm Reddy spotted the Artifact table and posted a screenshot of it to Twitter Friday. The image shows Reddy’s Monkey King sidling up to the three-laned table, which is set up with candles and staffed by the Imps who manage your deck in the Artifact client.

It’s a neat bit of cross-promotion – although it gets confusing if you think about it too hard. If Artifact is about Dota 2’s heroes and lore, then does Dota 2 exist inside Artifact? Or is Artifact a game that exists within Dota 2? Are the Dota 2’s characters aware of their damage stats and cooldowns?

We suppose it’s no weirder than characters in the Witcher agreeing to sit down to play Gwent with cards that depict themselves and their friends.

hey .. what's this inside my Dota base? pic.twitter.com/grAm6LRpHW

In any case, you can tune in today to watch the final round of the Artifact Preview Tournament over on SteamTV (the channel is now live). The top eight players will begin facing off at 9:45 a.m. PST. The first round will feature heffaklumpen vs. Naiman, GameKing vs. KuroKy, Feno vs. Mogwai, and Dane vs. space_loner.