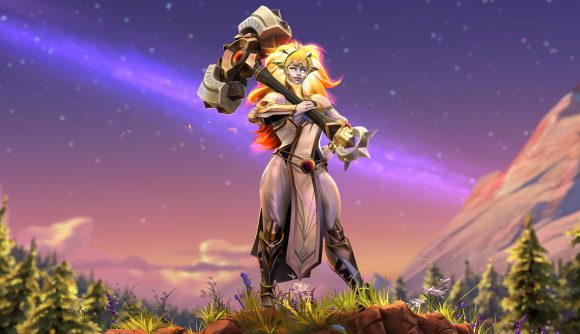 It’s been a big month for Dota 2, with the arrival of the MOBA game’s new hammer-swinging hero Dawnbreaker and the chonky 7.29 gameplay patch late last week. Since these, Valve’s battler has seen a couple of weeny follow-up updates to make a few changes here and there, with a new one dropping today that adjusts how a key item works, and brings a handful of unannounced changes.

Today’s Dota 2 gameplay update brings just one solitary change to the multiplayer game, but it’s one to make a note of: “Bottle now only refills two charges when capturing Water or Bounty runes”. This follows some discussion on Reddit wondering if a change some players had spotted following the recent 7.29 update – that a full bottle item with three charges would lose a charge (down to two) if you scooped up a Bounty or Water rune – was a bug or a gameplay update.

From today’s notes, we now know the bottle’s functionality has got an official change – so, going forward, the storage item will work a little differently, and tactics for mid-laners around planning instant restores of health and mana (or gold!), might need to shift to account for the fewer charges.

The Water rune was added in the game’s latest patch, giving mid-laners a handy way to fill bottles early on rather than relying on the very potent Power runes, and a way for teams to get some regeneration lined up more evenly across both sides. As for the bottle itself, it received a small handful of tweaks in 7.29, nerfing its mana and health regen capabilities, and dialling up its cost. You can catch the full patch notes on Valve’s site here.

As for some other, unannounced changes, Dota 2 Redditor TheZett notes that the latest mini-patch has “re-enabled Drow Ranger’s silence voice lines” and fixed some issues with incorrectly assigned Dawnbreaker VO and Chaos Meteor’s sound effect. It’s also brought “various tooltip changes regarding the (bounty) runes, their placement, and some interactions with them” and introduced a handful of other tooltip tweaks linked to heroes. You can catch these on Reddit if you’re curious about the full rundown.

If you’re looking for some tips on tackling Valve’s MOBA, check out our best Dota 2 heroes and how to play Dota 2 guides, as well as our sister site The Loadout’s Dota 2 ranks guides at those links.