Dota 2 subscription service Dota Plus and the MOBA game’s Guilds feature are in for some hefty updates, developer Valve has announced. The multiplayer game’s autumn season has arrived, and with it some additions and tweaks to Dota Plus’s features, changes to how Guild levels and perks work, as well as some information from the studio about Autumnal Treasure 2020, Shards, the game’s Ranked Season, and how it’ll communicate with the community going forward.

“The Fall Season is upon us and we’re excited to announce updates to Dota Plus and Guilds,” Valve says in a new dev post. “The Season begins today and it will run through the beginning of December, 2020.”

First up, the big changes headed to the game include a new way for Dota Plus members to scoop shards – a “new season of quests for Fall 2020” means members can earn up to 57,850 shards (alongside the existing ways to rack up the in-game currency). Additionally, the update means Plus members can also now use a “new Role Assistant hero grid arrangement”.

This feature “automatically records the picks of every hero in Ranked Roles matchmaking and displays heroes in their most picked roles. This data is updated automatically to highlight the latest trends and is filterable by MMR rank”. Plus, some of the Dota 2 battle pass’s features have migrated over to Dota Plus, such as Chat Wheel sound effects, “post-game healing and gold breakdowns” (which have been absorbed into Plus’s damage tab, and more. Finally, the Avoid Players list now has a maximum of 25 (where it was 16 previously).

An Update to Dota Plus and Guilds. https://t.co/GH8GhBxk24

As for Guilds – the feature added earlier this year with the Dota 2 battle pass – Valve says it’s keeping the existing ones, but that it’s redesigned the rewards features to ensure Guilds works outside of the context of the battle pass. “Guilds no longer have a Guild Level – instead there is now a weekly leaderboard of guild points earned in a given region,” the studio explains.

“Once a week, Guild members will receive their new guild rank and can claim a reward of shards; Dota Plus members earn double the amount of shards. A Guild’s weekly leaderboard position also determines access to special perks that may change over time.” You can check out the current list of perks on the dev post here. 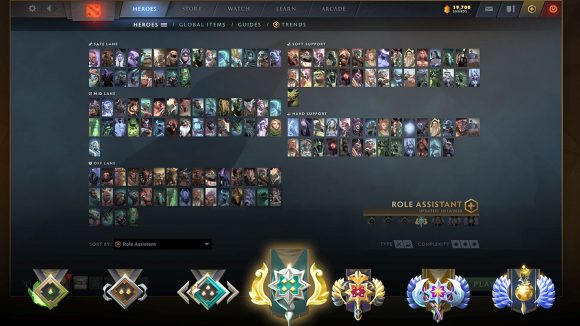 At the end of each week, Guilds points decay by a certain percentage, to help encourage new Guilds to try and catch up with existing ones (though it won’t be a walk in the park, either!). Additionally, changes mean “Guild contracts now earn both guild points and shards. All players have access to one contract slot per day, and Dota Plus members have access to a second slot. Guild challenges are still completed in parties of 3+ guild members, and they earn guild points for leaderboard position. Playing a match while in a guild earns guild points, with bonuses for being in parties with your guildmates”.

In the (pretty hefty) dev post, Valve also says it’ll be changing how it approaches MMR resets for the new season, by making it an optional, and also shares some updates on new heroes, how it’s tackling player toxicity, booster account bans, and more. You can read it for yourself in full right here – after, of course, you check out our super handy Dota 2 heroes guide for some tips.