Hot on the heels of Valve’s update on when the Dota 2 Pro Circuit will resume, the developer’s now revealed the latest batch of goodies for the MOBA game. It’s a shiny new Arcana bundle for Lyralei, the Windranger, which features a completely new hero model, items, and loadout pedestal, as well as custom animations and effects, VO, and more to reflect her mystical new style.

“Not even Lyralei herself understood the true extent of her connection with the guardian wind,” the bundle’s description goes. “With no knowledge of her forebears, or memory of her first days, she could but listen for the truth in the whispers of sun-dappled trees around her, or the howling storms that keep even daylight at bay. But as she grew, and her strange connection with the guardian wind became ever stronger, an unease about her origins began to take hold.”

Windranger’s new pack is all about unleashing this power of the guardian wind. Her new character model, items, pedestal, and special new animations and effects reflect this, giving the hero a glowing blue aura and ambient swirling breeze that surrounds her. She also gets new death effects for both her and enemy heroes she’s taken out.

In addition, Windranger’s new Arcana includes Eul’s Sceptre and Force Staff icons and animations, 500 exclusive voice lines, a custom channel bar, ability base and immortal effect additions, new hero assets, and even an unlockable second style. Racking up 2,500,000 in damage through the hero’s Focus Fire ability grants access to a Reflections of the Gale alternative style, which – as you can see below – gives Lyralei a more autumnal feel, with soft orange and red hues. 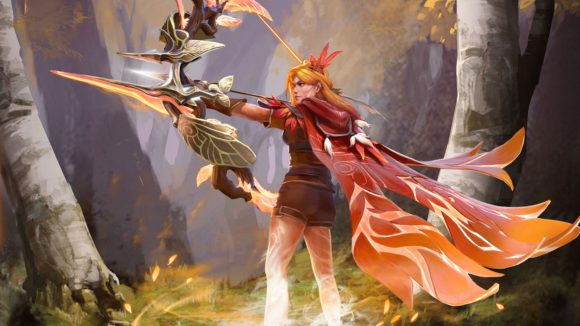 The new Windranger Arcana is the last to feature in the current Dota 2 International 10 battle pass, which ends on September 19, and unlocks at level 575. You can find out more and get a good look at all those new goodies on the multiplayer game’s site here.

We also have some handy guides to the best Dota 2 heroes and Dota 2 neutral items if you’re keen for some tips.