Looking for a Dota Underlords guide? Now would be a handy time to do so as Valve has released its spin on the autobattler genre, and despite only being in open beta it’s already got over 200,000 players. It’s somewhat fitting, too, as the game to introduce that genre was Dota Auto Chess – a popular mod for Dota 2.

The two games have a lot in common, but straight from the word go you’ll notice a slew of visual improvements in Dota Underlords – especially with the UI. Your match info is on the left, your collection of items, hero health, and alliance info is presented via tabs on the right-hand side of the screen, and the shop can be opened or closed at any time. It’s refreshingly simple to find what you’re looking for.

Dota Underlords is more than a visual lick of paint, however, and there are also refinements to gameplay, too. So, if you’re a fan of Auto Chess or the game in general and are curious, then this Dota Underlords guide is a great place to start.

Much like Auto Chess, each game of Dota Underlords will pit you against seven other players. You’ll only face one at a time, though, so think of it like a mini-tournament.

You’ll duel these players on a chessboard that you can place units upon. As each round begins, you get a selection of random heroes you can purchase from the shop using gold. Any units you buy go onto the bench that’s on the bottom of your screen and can be dragged onto the board. Once each player places their units on the board, they will attack their enemies automatically.

For the first three rounds, you’ll be fighting AI units, known as Creeps, to build up a stash of gold and some items you can use to develop your crew. After that, you’ll face off against an actual player. Win, and you’ll have your pick of three randomly rolled items to boost your team, whereas if you lose the game will decide which item you get. You are guaranteed, however, to get an item, which sets Dota Underlords apart from Auto Chess, where items appear more randomly. 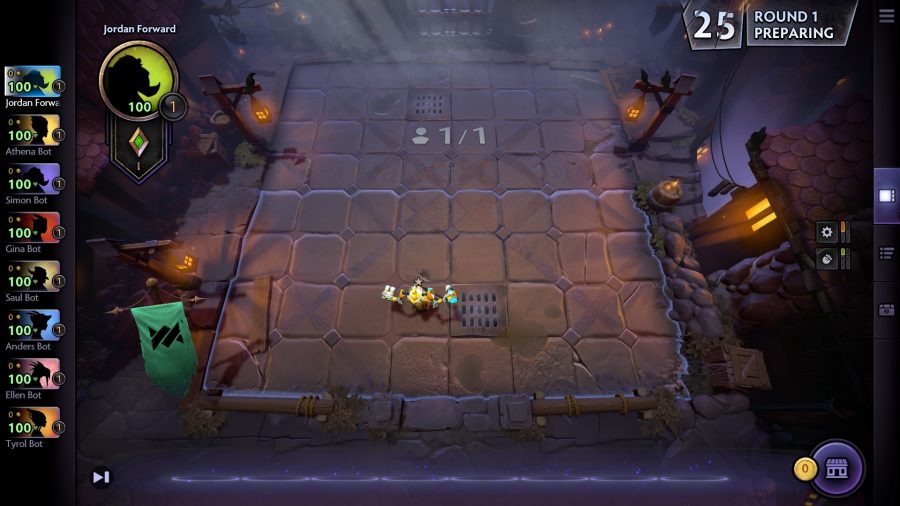 Every player has a health pool, and it’ll whittle away depending on how badly you lose and the stage of the game. In that sense, Dota Underlords is a case of using your items and money wisely to ensure that you’re the last player standing.

Over the duration of the game you need to level your character up to the max level of ten, as each level gained will allow you to place another hero on the board. This is essential not just in terms of outnumbering your opponent, but also to form strong alliances between heroes. If you look at any hero in Dota Underlords you’ll spot that they have two icons by them, which represent their Dota Underlords alliances – these are set bonuses you acquire by having multiple heroes from a single faction on the board at any given moment.

You can also upgrade heroes in Dota Underlords, which massively increases their damage output and survivability. To do this you need to acquire three copies of a single hero, which will consume all three and turn one hero into a two-star hero. You can then do the same upgrade if you manage to acquire three two-star copies of the same hero, which will create a three-star hero.

We’ve got heaps of Underlords guides for you to take a look at if you’re after in-depth help on any topic. Be sure to read our Dota Underlords tier list for a rundown on the best heroes, our guide to Dota Underlords strategy, or our preview of the best Dota Underlords items. In the meantime, however, here are some beginner’s tips to help ease you into this autobattler.

This handy information board is great for finding out who the heavy lifters on your crew are. You can sort it by damage dealt or taken, and even view the same information for the enemy. You can use this information to figure out which heroes to buff or protect, and also find out who your key DPS heroes are.

Leveling up seems like the obvious thing to do: what could be better than getting one more hero on the board? However, it costs a lot of gold, and if you don’t have a hero who is upgraded or the final piece to a powerful alliance then it’s usually an unnecessary and unhelpful expense. Use the money to either grow your gold interest or reroll to get better heroes or upgrade the ones you have.

You’ll get 1+ gold in interest for every increment of 10 gold in your bank. This scales all the way up to 50 gold, which will reward you with +5 gold every round: win or lose. Saving up to 50 gold and spending wisely afterwards is vital for winning games as you’ll be able to spend much more gold every round, and are not as dependent on win or lose streaks for income. 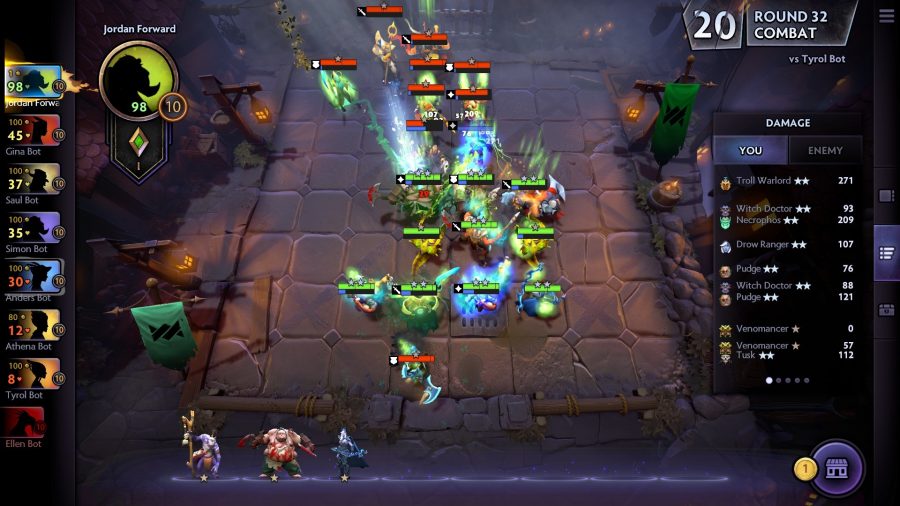 Don’t always pick a hero just to complete an alliance. Some heroes are much, much more valuable than an alliance bonus as they either boast a powerful ability – like Tidehunter’s crowd control attack – or are key for tanking or dealing damage. Doom, for example, is arguably the most lethal melee hero in the game, so it’s always worth trying to get an upgraded version of the Demon.

This is a general crumb of advice, but it’s really important to remind yourself that your early game comp won’t remain successful in the late game unless to transition it. As heroes are upgraded, more units get added to the board, and powerful items enter the fray, the crew you started a match with just won’t be able to keep up.

Brawny heroes are incredible early on where their high HP makes them tricky to take down, but late in the game they fall surprisingly quickly. You need to get comfortable chopping and changing your crew to fit every stage of the game. Take a look at the players who beat you, and try building your next Dota Underlords comp like theirs.

Thankfully, downloading Dota Underlords is a doddle. All you have to do is go to Steam and type the game into the search bar, click play, and you’ll be good to go. Unlike Riot’s autobattle game, Teamfight Tactics, there are no requirements for playing, such as having a certain rank on an account. Plus, it’s totally free.

And there you have it, a swift Dota Underlords guide to get you started. There are plenty of reasons to give Valve’s new game try. For Auto Chess fans, it follows the formula quite closely while adding some visual and gameplay improvements. For the Dota fan, however, it’s a fresh departure from the main game, that’s going from strength to strength. Either way, we hope this Dota Underlords clears up some questions you might have.