Life-sustaining oxygen is whistling out through a gash in the hull of the massive battleship, evidence of a shot landing true from another capital ship looming ahead. Salvo after salvo heads for us as we return fire, but things aren’t looking good. It’s time to bail, and after some fruitless attempts at hasty patchwork, we head to the hangar bay to board fragile but lethal fighters. There’s little hope of reaching home in one of these, but our chances are slim and getting worse aboard the crippled cruiser. Worst case scenario, we’ll go down fighting and give them some scars to remember us by.

I’m not playing this first-ever public demonstration of ship-to-ship combat in Dual Universe, Novaquark’s impossibly ambitious sci-fi MMO, but the hands-off nature of the demo hasn’t dulled its excitement. We’re being talked through proceedings by the studio’s founder and CEO Jean-Christophe Baillie and lead game designer Baptiste Agati.

It’s Agati who provides the running commentary on what we’re seeing from the more technical level – weapon accuracy, shipboard systems, what happens when certain bits of armour get shot – while Baillie talks more aspirationally, discussing the big design goals for PvP. Dual Universe, which will see a beta launch in August, is a massively-multiplayer online game where you can take on just about any profession and travel space, all in a world that’s fully editable and always shared by everyone else in the game.

‘Fully editable’ means everything can be built, modified, and terraformed by players, and that includes ships that range from swift interceptors with only enough room for a pilot, all the way up to massive motherships that carry multiple fighters aboard and are bristling with huge cannons and missile arrays. 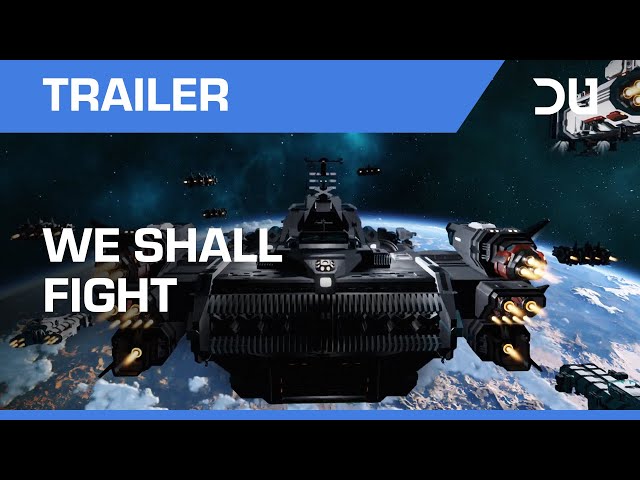 These are all constructed with materials mined out of planets, reminiscent of mineral harvesting in No Man’s Sky. So you’ll build alloy armour plating with metals you’ve dug up or purchased on the player-driven economy, and it’s the same armour that will be superheated and blasted to pieces in a scrape with pirates in interplanetary space.

It’s important to emphasise how granular this all is. There aren’t any abstract health meters for ships. Projectiles make real holes in the ships they hit, creating ‘real’ damage on the hull, weapons, propulsion, and radar systems. Armour plating can be welded onto hulls to give them extra protection, and even if parts of your ship look like Swiss cheese after a fight, you’ll still be able to limp home if your engines are intact.

But the effect is oddly terrifying, even moving at Dual Universe’s relatively ponderous pace. “When you shoot a construct, you do actual damage and the angle of the shot actually matters,” Agati explains. “So if you’re heavily plated, and you’ve prepared a ship that can take a lot of damage, then that works out – but if you get shot from behind you and your engines are exposed or your container is exposed, then that’s something you need to be thinking about as well.” 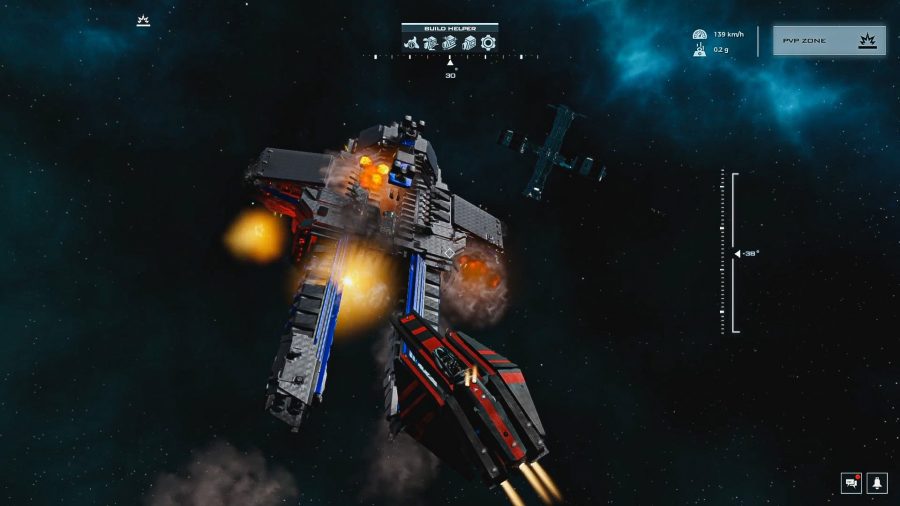 It also means that the materials you choose to build your ship with matter, since different elements and alloys have different resistances. Certain armour is resistant to kinetic damage from physical projectiles, while another kind is better against energy beams.

Things get more complex still when you start wiring up shipboard systems to command and control interfaces on big cruisers. A gunner’s chair can be connected to several weapons arrays and detection systems using a simple drag-and-drop interface paired with Dual Universe’s in-game Lua scripting system. The pilot and captain can have control surfaces connected to navigation and overall command systems, so you can design ships that work the way your crew’s rank structure is set up. Everything flows into a simple in-game, on-screen interface that allows you to select targets and activate weapons as they come online.

Scream all you like: The best space games on PC

All of this together means that when ships come to blows in Dual Universe’s designated PvP zones, massive investments of time, treasure, and effort are at stake. Like Eve Online, Dual Universe’s fights are literal gambles – you’re betting that the resources you’ve sunk into your ship will survive the encounter, and that you’ll be able to hang onto any valuable cargo. The tangible value of everything in the game is meant to change the way players approach combat, and it’s a compelling idea. 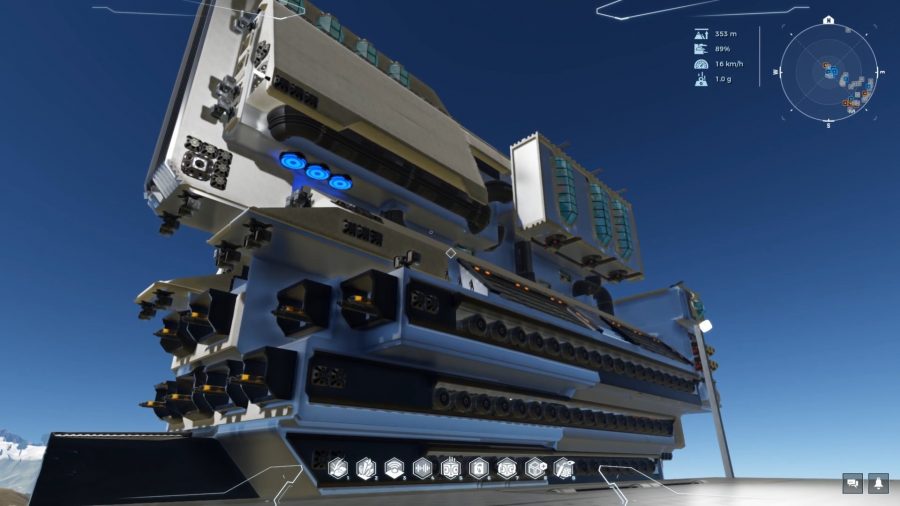 Dual Universe will place some limitations on what players can do in battle, however. Weapons cause real damage, but Novaquark says they’re still working out ways to limit griefing and the kind of dadaism you often find in player-created games. “We’re trying to design things so that it’s not an efficient strategy to build your ship as a huge cube of super heavy iron, within which you have your cargo,” Baillie says. Absurd Borg-style ship designs might technically work within Dual Universe’s system, he explains, but “we have an idea in mind, [so] we need to make some constraints in the way the game works so that it goes in this direction.”

Collisions between large ships could, given Dual Universe's damage system, be spectacular and devastating

For space battles, Agati says that means putting rules in place to make ships identifiable and thematic. “I think that’s the direction where we want to go, where it’s okay if you’re not fighting in a Porsche, but you need to be fighting in something that still sort of makes sense visually, right?”

Collisions between large ships could, given Dual Universe’s damage system, be spectacular and devastating, and that opens the door for players who want to create flying battering rams or suicide bombers. Here again, Novaquark is stepping in to guide the experience: collisions will only cause damage to the ‘attacking’ ship. “We didn’t want [collision] to be used offensively, but we still wanted collision to be punishing,” Agati says. “Even outside of combat, if you crash into the ground, you will take damage. And so it’s sort of the same system [with ship-to-ship collisions], but we spent a little bit of time cleaning that up and having it make sense in combat as well.” 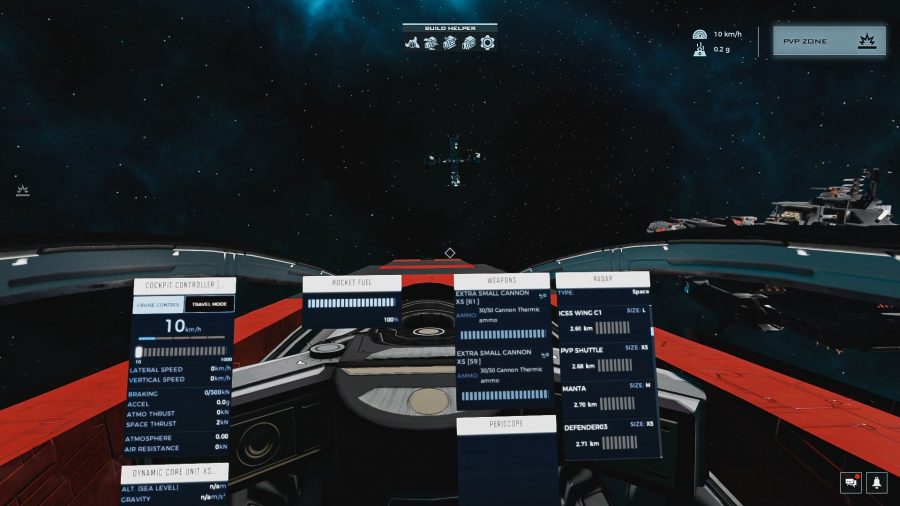 This also helps Novaquark avoid running up against the limit of computer power – large ships crashing into each other could send pieces and subsystems flying in all directions, multiplying the number of entities to track as they’re forcefully ripped apart.

This highlights the underlying improbability of Dual Universe – how is it all going to actually work? Even with some limitations in place, it feels like this game is simulating more than modern PCs and servers can handle. All these battles, player-created space stations, and cities, and the interactions within them in Dual Universe are, you’ll recall, supposedly existing within the same instance of the game’s universe, albeit distributed across what Novaquark has called its ‘Continuous Single Shard Cluster’ technology. There’s a staggering amount of stuff happening at all times, and Dual Universe seems almost reckless in its choice of scope given what we’ve come to expect from modern MMOs.

In formation: The best co-op games on PC

We’ll find out more about how it’s all coming together when the Dual Universe beta launches August 27, and for now Novaquark seems focused on making sure players aren’t completely lost when they show up for the first time. Limitations on where PvP can occur and baked in difficulties for would-be vandals may help keep things friendly as players take their first tentative steps into the game. 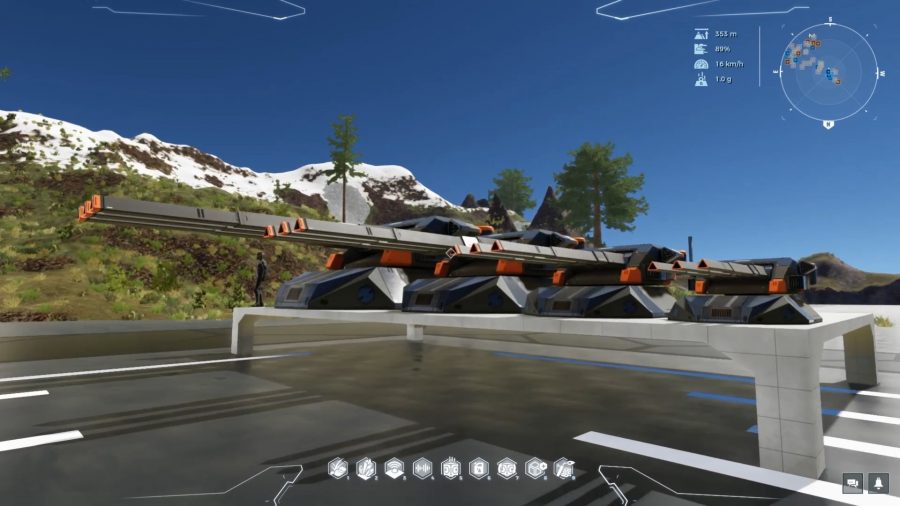 “It’s not going to be that easy to show up in the game and try to blow up everything – you will be crushed very rapidly,” Baillie says. “That doesn’t mean that we won’t have chaos organisations, whose goal in the game is just to wreak havoc everywhere. And we understand that actually could be very fun… but it’s not like a bunch of people can just decide on Saturday, ‘Hey, let’s go wreck Dual Universe.’ It’s not going to be working like that.”

Baillie pauses for a moment and reconsiders. “At least we’ve tried. We’ll see whether it happens or not. But we’ve tried to design the game in that spirit – there’s a lot of unknown here, and that’s what makes it interesting. It’s like a giant experiment, and we’ll see what’s going to come out of that.”