We’re living in the Dungeons & Dragons renaissance. The tabletop role-playing system that once lived in exile at the high school cafeteria’s nerds’ table is now one of the most popular things to watch on Twitch, thanks to a legion of geeks and theatre types coming together to celebrate collaborative storytelling. Sometimes, though, you just want to roll some dice and kill some things, and such is the promise of Dungeons & Dragons: Dark Alliance. It’s a co-op hack-and-slash game that dispenses with narrative and dialogue in favour of non-stop combat.

Dark Alliance takes place in DnD’s storied Icewind Dale setting and stars Drizzt Do’Urden, the Drow elf who stars in some 34 New York Times bestselling novels by RA Salvatore. Drizzt is a nice Drow who has sworn off all the things Drow tend to like, such as evil and murder. His pals Catti-Brie, Bruenor Battlehammer, and Wulfgar don’t get much of an introduction in Dark Alliance, and their limited interaction during missions mean lore fans will need to bring their own enthusiasm – fine for DnD aficionados, but far from a promising start for newcomers.

Each character has their own unique playstyle, abilities, weapons, gear, and character advancement tracks. Much like in Vermintide, you have a base of operations in which to fiddle with gear and character selection before heading into one of the handful of three-act campaigns or dungeons.

Once you’re in a mission, you’ll follow a fairly linear path toward whatever objective is laid out for you, usually fighting a boss of some description at the end. You’ll fight through a variety of goblin encampments and dwarven mines, and the character action shows some promise in the early stages. Levels all have interesting little diverging paths to explore, and these always have some kind of reward in the form of treasure or secondary objectives. 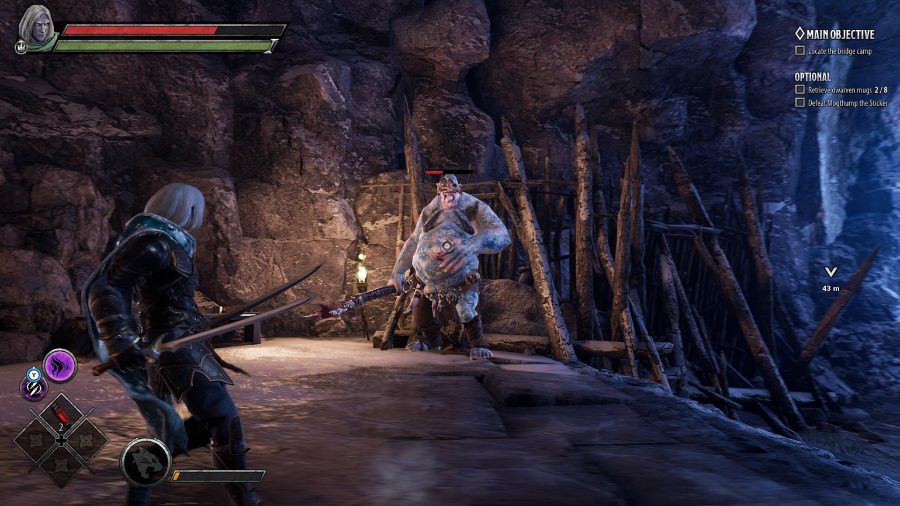 Unfortunately, the whole affair soon gets pretty dull and frustrating. Dark Alliance lets you select the difficulty level each time you embark on a quest, and you’ll want to make things as challenging as you can manage in order to return with the best loot. However, in practice there are two difficulty levels: it’s either trivially easy, or you get killed in one shot by a clumsy ogre’s area-of-effect attacks.

The controls should feel responsive, but instead they feel like you're queuing up attacks in an MMO

In a character action game in which combat is the primary focus, your attacks, movement, and abilities need to feel tight and responsive, and what’s happening on the screen needs to clearly communicate where threats and damage are coming from. Dark Alliance accomplishes none of this: controls feel sluggish and unresponsive, and I was routinely hit by attacks that appeared to go wide of my character by more than a metre. A hulking verbeeg doing a belly flop would often wipe out my full health bar, and I’ve been stun-locked into deaths that feel completely unfair more times than I care to remember.

It’s less frustrating when playing in a party, since your friends can revive you when you’ve been downed. However, as soon as you switch to co-op the enemies lose some of their motivation, suddenly becoming oddly lazy and barely registering your presence. If they do manage to take a teammate down (usually with some baffling one-shot attack that looks suspiciously off-target) then they often lose interest in fighting altogether, milling around your downed ally, content to do nothing but make it prohibitively dangerous for anyone to come and revive them. 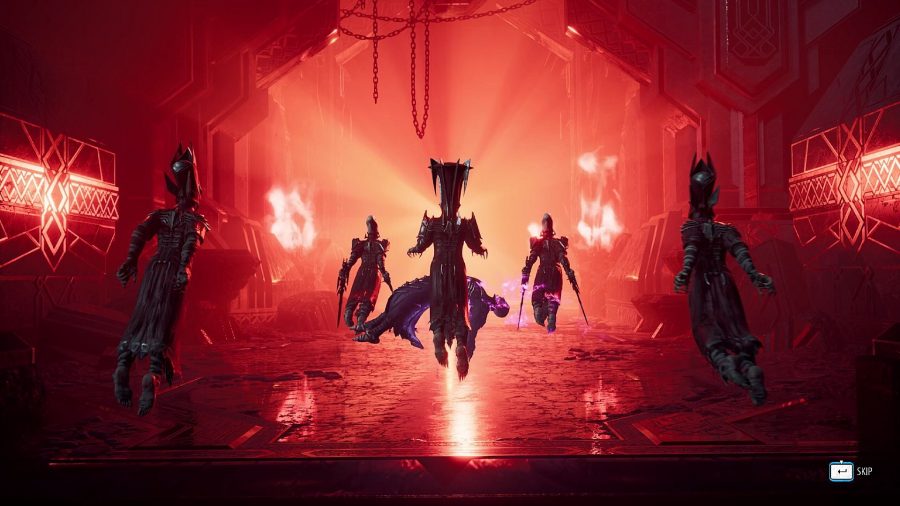 With Dark Alliance, developer Tuque Games clearly wants to cater to experienced players – there are complex moves to unlock that require precise input strings – but the sluggish controls make the action feel oddly disconnected from what your hands are doing on the controller. It’s a game that ought to feel tactile and responsive, the way the best action-RPGs like Nioh, Sekiro, or Dark Souls do, but instead it feels more like you’re queuing up attacks in an MMO.

It’s a shame, because Dark Alliance has some good ideas. Each time you finish a big fight you’re offered the choice between taking a short rest – which replenishes health and consumables and creates a new forward respawn point – and continuing, which increases the rarity of the loot you’ll find. This gives the party a reason to stop and argue over the risk versus the potential reward. Likewise, party-based attacks and executions sound like fun, if you can ever manage to get them to trigger in the brief window you’re given to pull them off.

I also genuinely love Dark Alliance’s cheeky approach to Drizzt and the Icewind Dale setting. One level begins with a cutscene of several huge verbeeg sitting around a campfire with a guitar, and throughout the whole mission you can hear them singing a song that goes “Meat, meat, bloody meat!” My brother and I continued growling bars of it to each other over Discord as we bashed our heads against endless unfair ogre fights on our way to the end of the stage. 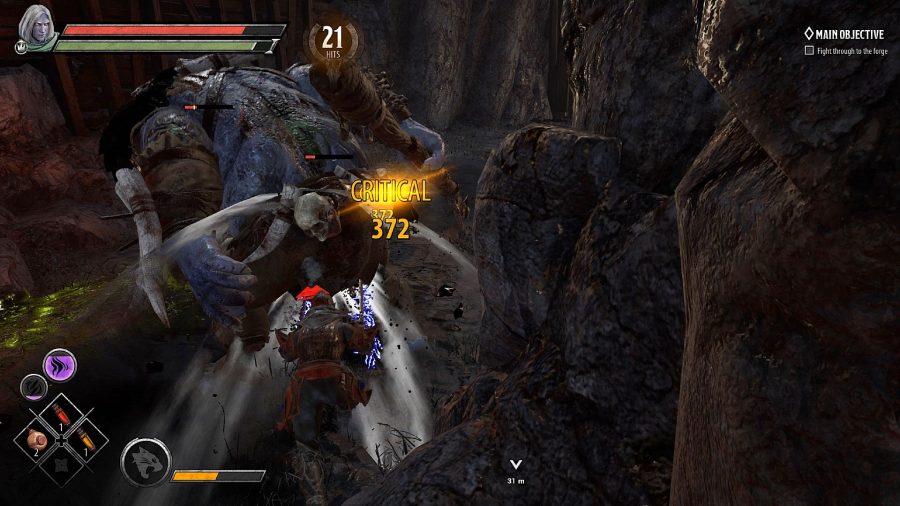 Some of Dark Alliance’s problems can probably be addressed post-launch. The difficulty scaling, for instance, might just need a bit of fine-tuning. But there’s a pervading sense of untidiness in just about everything, from the strange typos in menu text to the unreadable enemy attack animations and squishy, unreliable controls. At one point I noticed Drizzt slowly gliding across the ground without any input from me. And without his feet moving.

I can’t tell you what Dark Alliance might be, though – I can only tell you about the game I have in front of me. Sadly, the only way that Dark Alliance knows to make itself engaging is by upping the challenge unfairly, by giving its enemies huge health bars and inescapable one-shot kill attacks, which can only be overcome by grinding to boost your character’s gear score and level.

The controls are too mushy and unreliable for perfect play to feel attainable, and so you’re left running through boringly easy levels in the hope of happening across a piece of kit with better numbers on it than what you’re already using. 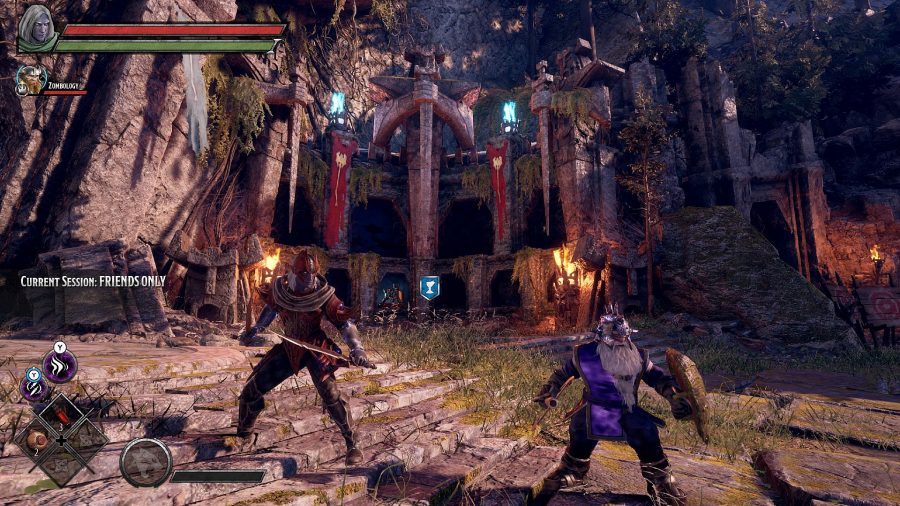 Even if you’re coming to Dark Alliance out of pure Drizzt fandom, there’s so little narrative here that the journey will almost certainly be disappointing. With better co-op options like World War Z, Outriders, Vermintide 2, and Destiny 2 readily available, Dark Alliance needs a lot of TLC before it’s ready to ask you and your friends for your time.

If you’re just dipping your toes into DnD then we’ve got a bunch of guides that you’ll want to check out. Start off with our list of the best Dungeons & Dragons games on PC, and then if you want to get into the tabletop original then seek out our sister site, Wargamer – they’ve got a superb introductory guide to DnD classes and a DnD character creator guide to get you and your party started.