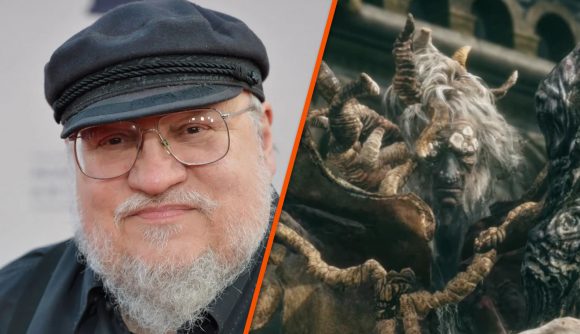 Bad news if you’ve already beaten the latest FromSoftware hit: Elden Ring 2 has been delayed. “We wanted to start work on Elden Ring 2 as soon as development on the first game concluded,” director Hidetaka Miyazaki tells us in an exclusive interview. “However, Mr [George RR] Martin won’t agree to a meeting until he beats Margit, the Fell Omen. Every time we reach out, he tells us that we must ‘put our foolish ambitions to rest'”.

Acclaimed fantasy author George RR Martin was brought in to help craft the backstory for Elden Ring, and as Miyazaki tells us, “certain contract details” require that he serve a similar role on the sequel – a sequel FromSoftware knew it wanted to make ever since the “overwhelming” response to the first gameplay trailer.

Yet, according to Miyazaki, Martin won’t agree to a meeting with the developers until he beats Margit, the Fell Omen, one of the first major Elden Ring bosses. Margit has proven to be a challenging roadblock to new players, and after soliciting advice from long-time Souls fans, Martin has insisted on beating Margit without the help of fancy builds, instead opting for a level-one melee class. Miyazaki tells us that Martin believes “if he cannot get good, his name shouldn’t be on the game”.

FromSoftware has considered simply nerfing Margit in order to help Martin move on, but after learning of the nerf to Radahn, Martin reportedly disconnected his PC from the internet, texting Miyazaki that he “doesn’t need any help from you lovable sorts”.

Martin was given a pre-release copy of Elden Ring, and has attempted to defeat Margit over 70 times over the past two months. That doesn’t sound like much, but we’re told that Martin creates a new character every time he dies, writes 100 pages of backstory for them, and simply cackles each time the ‘you died’ message appears on screen.

Miyazaki says that Martin has taken a new tack to motivate himself to beat Margit. He’s vowed to burn a page of the Winds of Winter manuscript whenever he loses a character.

We reached out to Martin for comment. He responded via email, saying “try fingers, but hole”.