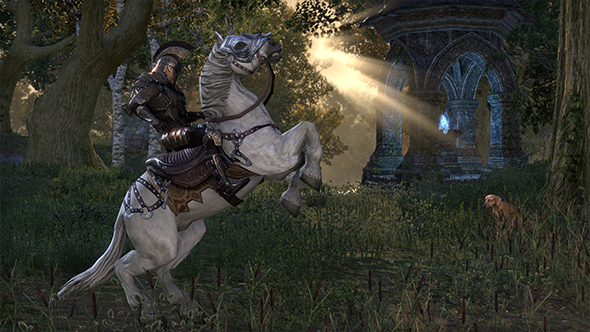 The Elder Scrolls Online has spent a good chunk of time shedding its MMO trappings since launch to edge closer toward a connected Elder Scrolls experience. In the process, the game shifted from a subscription model to a single purchase, and things seem to have gone pretty well since the big change.

Find out all the details on ESO’s new Clockwork City DLC.

It’s gone so well in fact that Bethesda are now celebrating 10,000,000 players, and to aid the festivities they’re launching a “free weekend” so that everybody can jump in and give Tamriel-wide adventuring a shot. I emphasize that they are the ones calling this a free weekend, because the promotion actually lasts a full week.

You’ll be able to download the game through Steam or the official site starting tomorrow, November 30. (The download is over 80GB, so plan accordingly.) You’ll be able to play through December 6, and any progress made will naturally carry over if you decide to purchase the full game. New players will also get 500 crowns to use in the in-game store, and if you’ve participated in a previous free promotion your character will still be available.

On top of that, the game is discounted to $9.99 / £7.49 / €9.99 through December 7, so if you’re going to get into ESO this is probably the time to do it. ESO has already gone very cheap as part of a recent Humble Monthly package, which has likely contributed to the new player milestone.