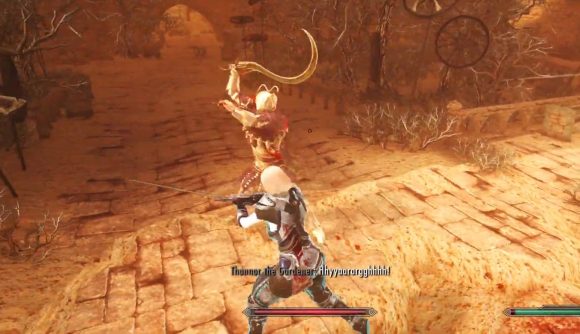 What would you get if you took Skyrim’s huge world and roleplaying system and mixed in the combat system from Sekrio: Shadows Die Twice? First of all, it would have to be called Sekyrim, and it would probably look something like this mod that’s currently in development.

Redditor LertKrush’s Sekiro combat overhaul mod is itself a heavily-modified version of tktk’s Ultimate Combat mod for Skyrim Special Edition. Starting from that baseline, LertKrush has managed to tweak enough parameters to produce a pretty convincing Skyrim version of Sekiro’s frantic, fast-paced sword combat. There’s the blocks and deflection effects, counters, and of course the dodge-rolling. Blades glow bright for blocks, and there’s even a charge up effect on your character when you’re ready to riposte. Watch out, though – NPCs can deflect your blows, too.

The mod is “pretty much done at this point,” LertKrush says in a YouTube video description, but there’s a problem: because it’s so heavily based on tktk’s Ultimate Combat SE mod, LertKrush needs permission before releasing the mod to the general modding public on a site like NexusMods (which happens to be where you can find Ultimate Combat SE).

Here’s a demonstration of the work-in-progress mod in action:

LertKrush is calling the mod ‘Skyrim Die Twice,’ although there’s still plenty of time to rethink the name (Sekyrim is right there, come on).

We’ll wait and see if the necessary permissions can be secured for a public release, but in the meantime you can always check out our list of the best Skyrim mods around. Hopefully we’ll be adding this one to the list before too long.