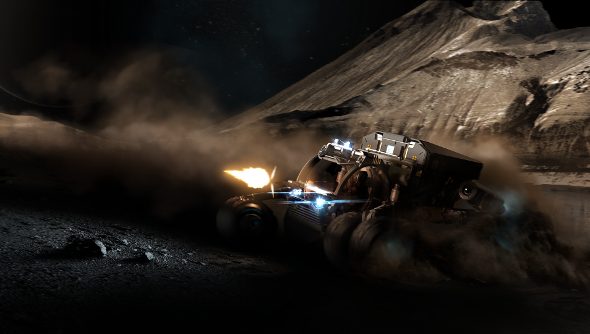 Elite: Dangerous is blessed with incredible scope: a gargantuan, simulated galaxy – our galaxy – in which you can travel to Earth or begin the long trek to the galactic core. For most of us, it’s the closest we’ll come to being a space tourist.

So when Frontier announced its ambitious new series of Elite expansions, Horizons, earlier this month, it almost seemed excessive. Those planets you normally fly by will become real places you can visit and explore, taking hours to traverse. To wrap our heads around it and get some perspective, we caught up with Frontier founder and CEO David Braben.

Elite: Dangerous is already full of worlds, but right now they are just spinning celestial bodies that are lovely to look at. Horizons will transform them into locations you can land on. How many worlds? A hell of a lot.

“So you can land on airless worlds, which is a high percentage – I don’t know the exact number because there are gas giants as well – of worlds that are in the game,” Braben tells us. “Beyond that there’s the Earth-like worlds.”

So it’s not just planets with an atmosphere we humans can handle. And when you land on a planet, you’re not transported to a cordoned off area with invisible walls. You won’t be exploring a section of a planet; you’ll be exploring the whole thing.

“Assuming it’s roughly the size of Earth,” says Braben, “and you’re going absolutely foot to the floor which is around 100 miles per hour-ish, give or take; very rough figures – the Earth has a circumference of about 36,000 kilometres, so around… 240 hours; so ten days.” Ten days. To get around one planet. Of which there are more than even the game’s creator knows.

Exploring a new world from the ground means a new vehicle is required: the Surface Recon Vehicle, or SRV. You can orbit the world and fly around it in your ship, of course, which will certainly cut down on travel time, but if you want to see it all from the ground, you’ll want to land and hop in an SRV. And you can land anywhere, as long as the area can support your ship’s landing gear.

The first buggy, which will launch with 2.0, is the Scarab, and conveniently fits into the cargo hold of even the Sidewinder, though you won’t be able to carry much else if you’re packing one in a small ship. And while you’ll only be able to buy that one ground vehicle at launch, Frontier is planning more of them, with specialised roles. Customisation is on the cards as well.

So, how do they drive? It’s all in the thrusters, apparently. You see, a lot of these worlds are going to be low gravity planets, which would mean you’d spend half the time up in the air, unable to steer. That’s why each SRV has some thrusters fitted onto it. These thrusters mean you can do exciting things like leap over chasms, but they can also push you back down to the ground, allowing you to grip the ground like a Formula One car. 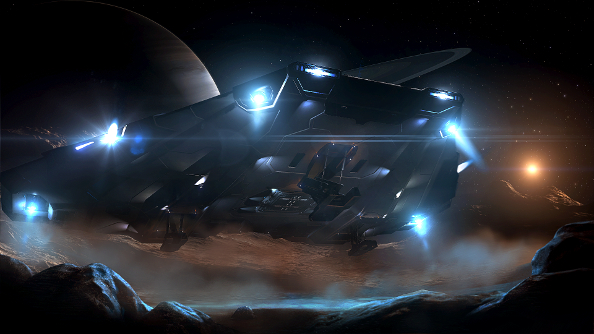 Now, while jumping in a buggy and exploring a new, wild planet sounds like a lovely way to spend an evening, these planets aren’t just tourists attractions. There will be secrets to uncover, military outposts to find and missions to embark upon.

“We also wanted there to be more richer content other than completing missions,” lead designer Sandro Sammarco explains. “Not just your kill X ship and return for your reward; instead you might be tasked to go and steal some data plans, but that might evolve into cutting the power to get the doors open. Maybe it’ll involve destroying some large anti-aircraft guns to gain access to the landing pad in the base. These events will chain together to give players a more richer and compelling experience.”

Sammarco hopes that this will improve space content as well, as these more elaborate missions will bleed into other parts of the game.

When Elite launched last year, it was missing some cooperative features. These were eventually added through updates like Wings, and in Horizon there will be more opportunities for players to work together, completing missions as a team.

“The other thing is to try and encourage cooperation between people in SRVs and people still in their ships,” Braben says. He offers up an example of a player in an SRV knocking out a base’s weapons, allowing a pilot to swoop in and start blowing stuff up, which in turn will let the SRV player get further into the base.

“They’re in the same game-space – the scale is dramatically different, but we want to make sure it doesn’t feel like it’s some sort of separate hived off area,” adds Sammarco. “You’re going to go down from space, into low-planetary flight, and then land and get into your SRV; but there’ll still be ships flying around.“

“When you’re at low speeds, it’s going to be an interesting challenge, especially with the bigger ships; you’re not going to be able to just sit there and hover – they’re designed primarily for space travel,” Braben tells us. “When you’re near a surface, their maneuvering thrusters are having to put in a lot of extra effort, so when you try and stay still, then try and tilt the ship, you’ll start to lose height and slip. It’s going to be very interesting.” 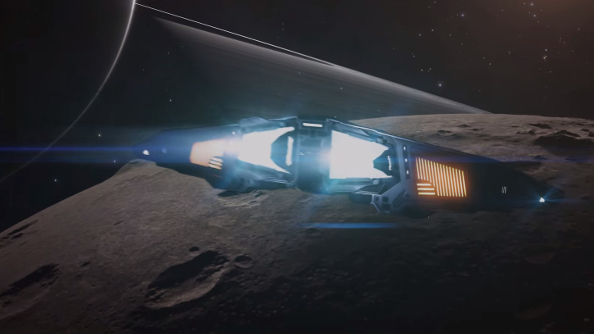 As you’re flying down to the surface, you’ll spot more than the aforementioned military bases. They aren’t the only man-made areas that will dot these worlds. You’ll be able to explore starports, walking the streets and trading with vendors. Like the orbital installations, they’ll vary in size and what sort of things you can trade in them.

Just like in space, planets will feature NPCs going about their business too, just in ground vehicles rather than ships. So expect new potential enemies to shoot at.

“These guys we’re calling ‘Skimmers’, so they are really small – even smaller than an SRV – but they’re controlled remotely,” Braben explains. “So there will be a pilot, but they’ll be sitting back in the base controlling them remotely via a radio link, which also has a limited range. They can extend that range by putting base stations around, which of course you can take out. Lots of tactics there.”

Horizons isn’t just an expansion, it’s a whole series of expansions – a new season. So, while the big thing Frontier is talking about right now is the ability to land your ship and get out of it, there’s a lot more on the horizon.

“There is so much more we can do here. Down the line, there’s getting out of your ships, Earth-like planets, cities, wildlife, game hunting; not killing lions of course, but it will be the equivalent, so you’ll go after big and giant creatures. It’s just the richness of that – there is the whole ‘where does the upload artifact story lead?’ There is a long plan in the future.”

Elite Dangerous: Horizons is due out at the end of the year.