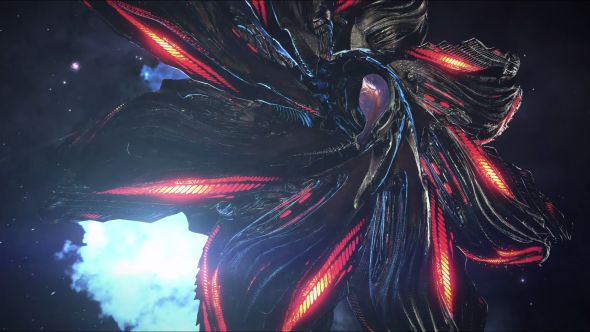 Elite Dangerous’ next update, The Return, will be released on 26 September. To celebrate, Frontier have released a cinematic trailer showing a clash between humanity and the Thargoids.

Find out more about the Thargoids, Elite Dangerous’ “horror story.”

In the Elite universe, the Thargoids are the only other sapient species known to humanity. An insectoid species, they’re incredibly aggressive, and all diplomatic attempts to contact the species were unsuccessful. The game’s lore suggests that a war was fought against the Thargoids, after which they disappeared, and for a long time they were widely considered a myth.

That is, until the beginning of this year, when Elite: Dangerous players started to find themselves pulled out of hyperspace and confronted by an enormous Thargoid ship, in the first contact with the Thargoids for generations. Those ships scanned the players, before slowly drifting away. Since then, players have discovered 208 Thargoid bases scattered across the galaxy, and it seems as though they’re all growing in size.

The trailer for The Return shows five human ships attempting to take on one enormous Thargoid craft, and gives some idea about how the Thargoid might respond to this new threat. Frontier say that “on launch day you’ll be interacting with the most mysterious and deadly things you’ve encountered in the Elite Dangerous galaxy.” Over the coming months, The Return will “continue to roll out with interactive narrative-based content.” You can check out the whole announcement here.