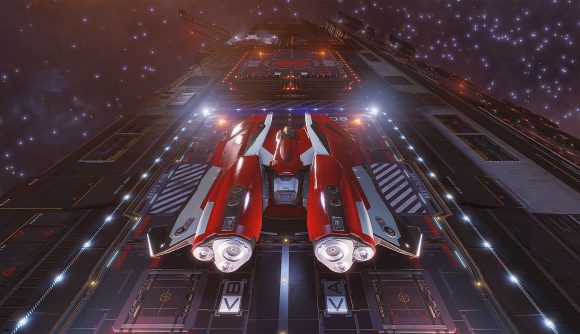 In a post on the Elite Dangerous forums, Frontier announces: “Over the next couple of weeks, we’ll be introducing a number of changes to Fleet Carriers in time for the release in June”. The list of tweaks and tinkerings following the latest beta is significantly shorter than those from the first beta last month, but there are some key changes included.

First up, the post explains, “the buttons used to increase or decrease both the bank and the commodity market will now scale, like other systems in-game, when depositing credits or adjusting commodity prices.” In addition, Tritium mining’s getting some adjustments, so it should be “more lucrative” when the release date rolls around. This especially applies to sub-surface mining, too.

Also on the list are a few fixes, including one for a “credit exploit involving selling modules in a Fleet Carrier’s outfitting service”. Plus, a pesky bug that was swapping some locations’ names and markets has been fixed – for example, Frontier says, “Ceres Tarn receiving its original name once more!”

The Fleet Carriers Update will come out of hyperspace into the game on 9 June!

Thanks to our incredible community for taking part in the Betas and giving your feedback.
Check out our recap of the beta here: https://t.co/stcNUldnrr pic.twitter.com/YexPihrwOG

Lastly, “A bug preventing the transfer of commodities such as Thargoid Sensors, Guardian Urns and others on Fleet Carriers has been resolved,” the post explains. Sweet.

Buried in the bottom of the post is some really exciting news for players keen to get stuck into the space game’s Fleet Carriers update live in-game, too: “The Fleet Carrier Update will emerge from hyperspace and come to Elite Dangerous on June 9!” That means, as of this post, you’ve got less than two weeks before you can try the “mobile starships and trading hubs capable of transporting multiple allies” in their full release form.