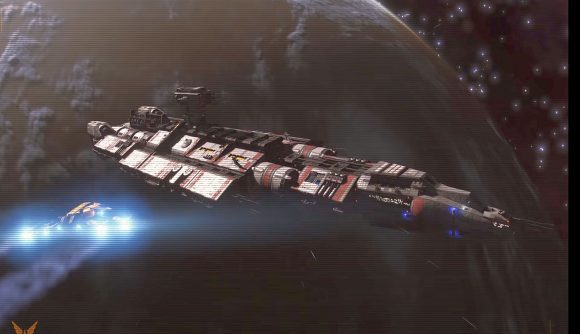 After two betas and a batch of updates and changes, the Elite Dangerous Fleet Carriers update is at last here, and there’s a hefty batch of patch notes to eyeball for its launch. There’s a whole host tweaks, adjustments, and additions to get a look at, reaching across the new Fleet Carriers themselves (of course), exploration, mining, missions, new player experiences, cosmetics, stability and crashing, factions, and plenty more. Read on to see what’s in store for the space game’s latest update.

As reflected in the patch notes posted by developer Frontier on the simulation game’s forums, the all-new Fleet Carriers – massive ships packed with hangar bays that can act as a moving base for operations – bring a sizeable list of new features of their own.

You can customise these to suit your playstyle by installing various different services on them (as well as with cosmetic changes you can grab from the Livery), and have “16 landing pads – eight large, four medium, and four small” to give you plenty of options. They cost five billion credits in-game and you can find them for sale at starports carrying a “Fleet Carrier Vendor contact”.

In addition to the carriers, the patch also has some nifty updates to mining, such as to NPC ships – they’ll “now have a more appropriate cargo based on contents of the rings in their system” – as well as a change that means “sub-surface mining deposits can now eject multiple resource chunks from one successful hit”. Plus, the dev has added “depot support to solo mining missions”.

There’s a lot to unpack in the notes, so we’ve included them for you to check out for yourself below (via Frontier):

In addition to the Patch Notes above, here is a list of some previous changes from the Betas:

That’s all for the Elite Dangerous Fleet Carriers update patch notes. The new content drops today, so go get stuck in.