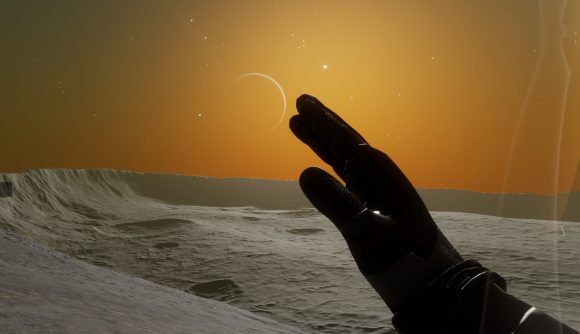 The latest patch for Elite Dangerous Odyssey is out now, and it’s a hefty one. The space game’s big expansion, which allows you to travel across planetary surfaces on foot and explore bases and orbital stations in first-person, now includes an emote wheel – which allows players to finally salute each other, as they’ve traditionally done by typing ‘o7′ in chat.

Odyssey Update 8’s new emote wheel includes emotes you can select (or assign to hotkeys) for salute, wave, applaud, disagree (thumbs down), agree (thumbs up), point, stop, and advance. Frontier suggests this is a physical way to express yourself in game beyond the traditional crouch-stand-crouch-stand gesture players have been subjecting each other to since time immemorial. The point emote also adds a marker wherever you direct your finger, so it can be helpful in coordinating with fellow commanders.

There are other big new features in this patch as well, including the ability to disembark on and explore Wells-class megaships. These ships now have their own social spaces inside them, which can offer services such as Inter Astra, Apex Interstellar, Pioneer Supplies, Frontline Solutions, or perhaps just a bartender and an escape pod or two.

A bunch of ships now support multicrews of up to four commanders, and these include the Alliance Crusader, Anaconda, Beluga, Federal Corvette, Imperial Cutter, Type9, and Type10.

Four new engineers have been added to the Colonia region, they’re named Baltanos, Eleanor Bresa, Rosa Dayette, and Yi Shen. You’ll also find new missions that allow you to meet and interact with various characters at settlements, new delivery and smuggling missions, and some new bounty hunter and assassin ships in a few Odyssey missions.

The Odyssey team has also made another pass on further optimising Elite Dangerous’ new on-foot mode, and most players ought to see significant performance gains with this patch. The full patch notes have all the details, and the update is available now on Steam.