One of the things I really admire about Elite: Dangerous is its commitment to astrophysical realism. It’s not just a giant open-world space game, but an attempt to model our galaxy as we know it.

And with NASA’s New Horizons probe bringing back our first-ever high-resolution images of Pluto, that means the good people of Frontier Developments must confront a new reality: their model of Pluto is wrong.

Honestly, I’ve never even been back to the Sol system in Elite. It’s a long ways away from where I’ve ended up, and I guess I’ve always been more interested in discovering new black market trading outposts than our boring old solar system. Bu in this week’s update, Frontier talked a little bit about what the New Horizons mission means for Elite, and how there’s a lot more to updating Elite than just slapping a more accurate “skin” on Pluto.

It’s really interesting to read Frontier’s reaction to the NASA mission, because it reveals a lot about how they think and work when it comes to building their scale-model Milky Way.

“You’ll notice Pluto and Charon look a little different in Elite: Dangerous,” they admit, “though we’re pleased by how closely our simulation has matched the ‘smooth’ heart-shaped area on Pluto. Our simulation assumed a more dramatic effect from the mild volcanism caused by tidal heating from interaction with Charon, which would uniformly refresh the surface over time. There’s still 1,300 years between now and 3301, which means around five more orbits and five more heating/cooling cycles between today and the era of Elite: Dangerous. It’s possible the renewed surface could spread to cover the entire body by 3301!”

But what’s really interesting is why the can’t just take the New Horizons images and “paint” them on to Pluto in Elite: Dangerous. 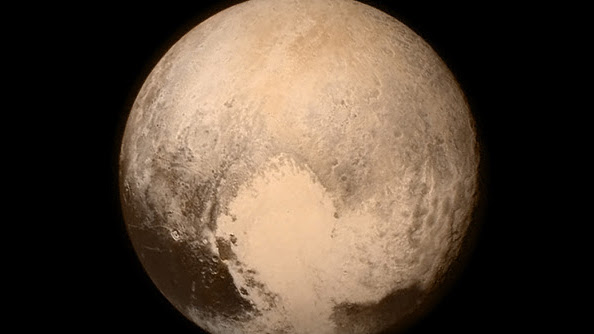 “All our planets are built using a sophisticated simulation so that one day you can get close to them. Really close,” writes Art Director Jon Bottone. “Right now every planet can only be observed from afar, but Elite: Dangerous is designed for the future, and by sticking to the simulation and constantly improving it to make it as real as possible, we can be sure the canyons and mountains you see from space will accurately be reflected when you skim close to the surface, or even land upon it.”

So what Frontier are waiting for, apparently, is whatever updated topographic information NASA may have gleaned with New Horizons. But until they have that, Frontier are going to stick with their procedurally-simulated Pluto, and all it’s finer detail… whether it’s real or not. Because the real endgame for Elite’s planets is surface-landings and maybe even atmospheric flight.

You have to admire the degree to which Frontier have committed to their vision. Most people, myself included, probably just care about spaceships and space battles. But Elite is really more about space itself, and Frontier won’t compromise on that.

Except for the magic, physics-breaking spaceships. But c’mon, realistic space travel is kind of a drag.

Oh, one other important note! CQC, the PvP combat arena mode, is coming to Xbox One first and some of us were kind of disappointed about that. However, today’s update sounds a reassuring note as Frontier reassure us that “CQC will be coming to PC and Mac within weeks, not months, of the full CQC release on Xbox One.”

The question now is HOW MANY weeks, but still, this is a good step.