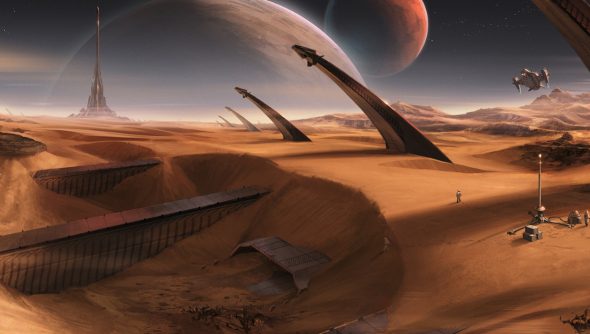 There’s less than a month to go until that funny time of year when lots of people selflessly throw gifts at other people. Endless Legend developer Amplitude is getting into the spirit early, giving away a free add-ons for both Endless Legend and Endless Space, called Visions of the Unseen, which we mentioned last week, and Chronicles of the Lost.

Along with new side quests, diplomatic interactions and fancy effects for unique weapons, Endless Legend’s Visions of the Unseen update also chucks a brand spanking new race into the maelstrom, a minor faction – that means you can befriend them and even use some of their troops, but can’t play as them – known as the Eyeless Ones.

These creepy folk blind their offspring, enhancing their other senses. You’ll be able to meet, befriend or destroy this new faction in your conquest of the world when you start up a new game.

The update also comes with a lot of balance tweaks and improvements to the AI, battles, the user interface and a whole bunch of other things. Take a gander at the full patch notes over on the Amplitude site.

Chronicles of the Lost, Endless Space’s Disharmony update doesn’t add anything quite as dramatic, but does include new exploration and colonisation events and an introduction cinematic for the Vaulters. Both versions of the game get AI and construction improvements and bug fixes. You can see the full list of additions here.

Endless Space was an interesting space 4X game, but I found it to be rather sterile. Endless Legend, on the other hand, is possibly the best 4X game to come out this year, and if that’s not enough to whet your appetite, you should read my Endless Legend review.