How do you escape from Tarkov? The very name of the game begs the question, after all. It’s a bit of a complicated answer, though, as the game itself is complex and pretty unfriendly to new players looking to jump in for a quick game. To get there, we’ll have to dip into how to play Escape from Tarkov and win. Don’t worry, as we’ll toss some tips into the guide to help you get there.

First off, you’ll need to get your hands on Escape from Tarkov. That may prove tricky, as it’s not out yet. Thankfully, all you have to do is pre-order the game and you’ll get access to the Escape from Tarkov closed beta – there’s no Escape from Tarkov Steam release date, so you’ll need to head to the game’s website for that. There are four editions you can pre-order, and they all come with closed beta access. They all differ in price and come with more equipment and more places to put them in. You’ll get more benefits depending on how much money you’re willing to part with, but you can still win without them. So don’t worry.

Over this guide, we’ll go over how to play Escape from Tarkov, from the basic rules of the game to how healing and extractions work. To that end, here’s how you escape from Tarkov.

What is Escape from Tarkov?

Escape from Tarkov bills itself as a ‘hardcore and realistic online first-person action RPG/Simulator with MMO features and a story-driven walkthrough’. You find yourself in the city of Tarkov after conflict breaks out, and you can either side with USEC or BEAR. Some of the foes you come across will be AI, and others will human controlled. That’s right, this is a multiplayer game, too. You’re not just on the field to shoot the enemy, and you have other things to worry about, too. You’ll need to keep an eye on your hunger, hydration, and blood pressure levels. There are also injuries to contend with and you’ll want to watch your gun for general wear and tear – fail to do so, and it may jam or overheat.

Gameplay in EFT revolves mainly around loot – the desire to get it and the fear of losing it. It’s up to you to decide what balance you want to strike. There are other player-controlled foes on the map alongside AI ones, too. You want to be equipped enough to take them out, but not so much that dying leaves you shorthanded as you’ll lose everything you’re carrying when you die in Escape From Tarkov.

Thankfully, there is a safe house for you to stash your loot in, so if you do get some good plunder you have somewhere to stash it should you escape. There’s a player-driven in-game economy in the form an auction house, which lets you sell and buy items found around the game’s maps. 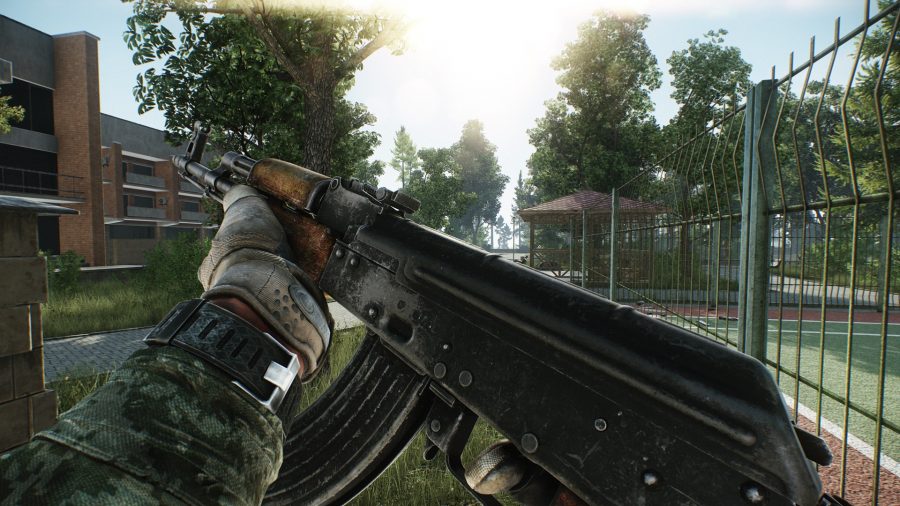 If the fear of losing loot puts you off, try playing as a SCAV

SCAVs are scavengers in EFT’s lore that come with gear that’s made up from your arsenal. There is a cooldown timer on them so you can’t play as them all the time, but there’s no risk of losing your gear either. What’s great about these runs is that you won’t be attacked by the AI SCAVs that are roaming around the map, allowing you to safely move around portions of the map that would normally prove inhospitable.

Quest objectives vary, but they typically involve picking up certain items for various traders or killing other operators. Either way, though, they come with some chonky experience points. You’ll also unlock new trader loyalty levels that allow you to purchase more items and gain access to others that require a quest completion to unlock them.

Having insurance on your gear gives you the chance of getting it back as long as other players haven’t looted it from your body. You have the option of going with Prapor or Therapist – the former is cheaper, but takes a while to arrive back in your arsenal. You’ll want to make the call based on how much you play. Prapor will get your items back to you after 24-36 hours whereas Therapist is between 12-24. Do keep in mind, though, that you only have 72 hours to claim your items back once your insurer has reached out to you.

One easy way to ensure your gear is successfully extracted by insurance is to discard it all in a ditch or bush the second you realise you’re unlikely to make it out of this raid alive. Kit is hard to find in foliage and most people just search bodies and then run away.

Keep an eye on your limbs

You have 435 health points in total, and they’re spread between your head, thorax, stomach, legs, and arms. You can tell how hurt you are by the colour they’re represented with. Grey is fine, red means it’s hurt and needs treatment, while black means it’s gone – big problem. You can get health back by using a Medkit, but you’ll need bandages to stop blood loss. Once your limb goes black, you won’t be able to heal it traditionally. You can use morphine or painkillers to tide you over, but you’ll need a CMS kit or a Surv12 field surgical kit. Applying that, however, will only return the limb to one hit point.

Always have a map loaded up

Whether you download a map of customs and have it on your phone, or you’ve got a second monitor going spare, it’s absolutely vital you have an image of the map you’re playing on standby so you can navigate yourself out of trouble in sharpish. There are heaps of well made community maps you can find with a quick search, and using these will help you learn call outs, extraction points, and discover new routes all without having to buy a map in-game.

We’ve got a dedicated Escape From Tarkov ammo guide to walk you through the best ammo types, but you can get to grips with the absolute basics by relentlessly inspecting every bullet type and magazine that falls into your lap.

Make smart use of your secure containers

Secure containers are the only personal container in Tarkov where you can safely stow gear – place something in a secure container and you’ll have it in your stash even after being killed and looted in a raid. While secure containers range in size depending on what version of the game you bought, even the standard Alpha variant can turn doomed raids into profitable ones if you’re smart about what you keep in there.

High value items and barter items like PC components, high level dog tags, and shortcut keys all sell for over 10,000 roubles, so make sure you prioritise those items. 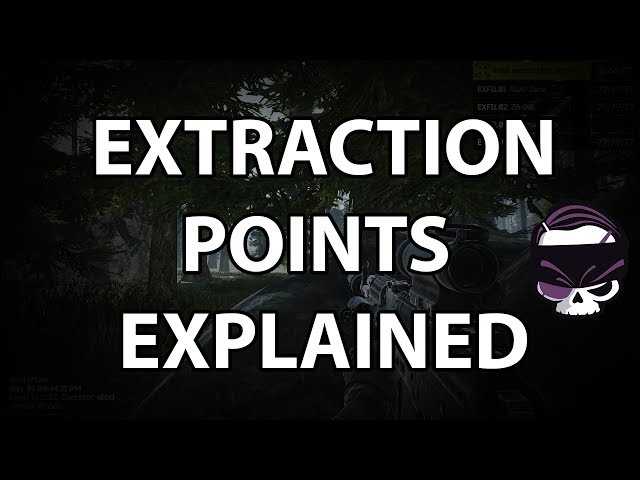 How to escape from Tarkov

You can escape from Tarkov, or any map, by searching for the extraction points. These allow you to leave the raid after a certain amount of time. To see where the available extraction points are double-tap the O key. Extraction points differ depending on where you spawn, and if you’re playing as a Scav or not.

You can tell if an exit point is open by looking for active lamps, spotlights, or green smoke. Keep in mind, though, that some extractions require a certain amount of Roubles per player. Some maps, like The Lab or Reserve, ask you to complete special actions to use extraction spots, so no corner camping until it’s time to break free.

When you’re inside an extraction point, a timer will appear in the top right corner, and you’ll escape as soon as it hits zero. The timer itself can differ from a few seconds to a couple of minutes.

And there you have it, that’s how you escape from Tarkov. It can be a bit of a punishing FPS game, but once you get to grips with it, you’ll have it down soon enough. Of course, knowing how to play the game helps, and we’ve provided some tips to help you out if you’re a beginner. If you’re still struggling, you can always just hit the escape key.