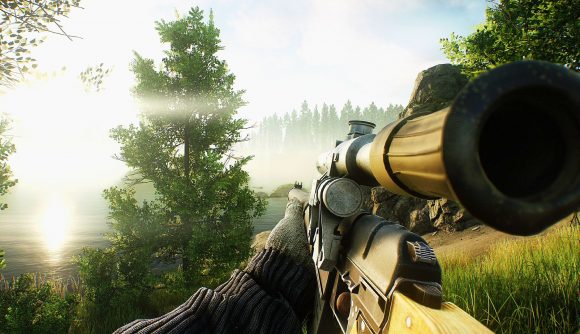 Starting out in Escape from Tarkov is less about shooting and more about figuring out where you’re supposed to go. You can buy maps from the in-game NPC vendors, but many players use static maps found online. These have typically varied in quality and the amount of information they contain, but fortunately now there’s a definitive, interactive set. They’re great.

The Escape from Tarkov map set by Map Genie contains six free maps: Factory, Woods, Customs, Interchange, Shoreline, and The Lab. Reserve is, well, reserved for ‘pro’ users, which costs $4.99 for a year or $9.99 for a lifetime subscription.

What you get is an extremely useful online tool that’s more than just a map, although the maps on their own are highly detailed, clear, and packed with information. You can filter out certain kinds of information to focus on key items or enemies, or leave it all on – the maps can be zoomed in and out, and they’re readable at every scale. They show PMC spawns, scav locations, exfiltration points, the locations for quest items, and every piece of loot on each map.

You can also set the maps to track specific categories of items, note locations you’ve discovered, and leave your own notes. As anyone who’s just getting started in Tarkov will know, it’s an amazingly handy set of tools.

Map Genie also has trackers for vendor quests, as well as a detailed dependency flowchart that shows which quests to do for which vendors to unlock later quests. It takes all the annoying guesswork out of leveling up, which can be a huge chore.

If you’re not into Tarkov, Map Genie has maps for an expanding collection of games that include The Outer Worlds, Horizon Zero Dawn, several Assassin’s Creed titles, several Far Cry games, and more.

Check out our list of the best open world games on PC if looking at maps puts you in the mood for adventure.