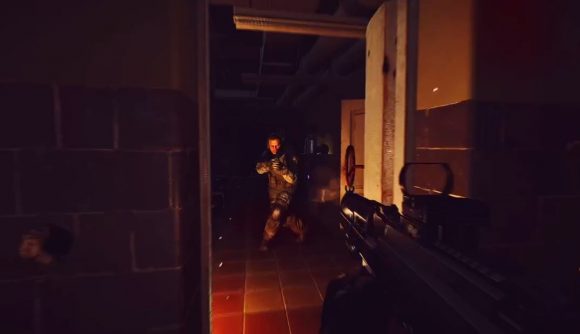 Escape from Tarkov has gotten an update that makes some significant changes to its map Reserve. The system of tunnels in the bunker beneath the map’s military base has been expanded, and there are new quests and rewards to seek out in the dark corridors underground.

If you haven’t visited Reserve, it consists of a military base and the surrounding area, which includes the entrance to an underground bunker. Corridors in this bunker opened under some of the buildings on the military base, and the update to the map adds several new ways to enter and exit this underground tunnel network. It’s a dark, atmospheric area to explore with plenty of hallways to get lost in, but that’s where you’ll want to head if you plan on picking up the two new quests from the vendor Prapor, which become available when you’re at reputation level 10 with him.

The quests added in the update have Prapor asking you to explore the area beneath the base. In the first quest, you need to find the entrance to the bunker, then head in and find a control room in the tunnel network. That’s it – once you’ve found the room you’re safe to head to an exfil point and complete your raid.

In the second part of the quest, you’ll have to head back down into the bunker and identify some big hermetic blast doors. These each lead to buildings on the base, so it’s a good way to familiarise yourself with the layout of the tunnel network and how it connects with the layout of the base. You have to find the doors that lead to the hospital, the academy building, barracks buildings 1 and 2, and the air control center. That done, you can leave the raid.

Attention! Today we plan to upload 0.12.6.2 patch. The game will be stopped for approx. 2 hours. We will inform you when we will start the update #EscapefromTarkov

The trick to this one, though, is that you need to spot all the doors without dying. Unlike other Tarkov quests, this one doesn’t let you complete individual subtasks in different raids, with each one counting toward your progress. Nope – this time it’s all or nothing, and you have to find all the doors on the list and survive in a single raid.

Also of note in this update is a fix for the scav boss (and popular cosplay subject) Killa who hangs out at Interchange. The update patches the exploit that allowed players to effectively stun-lock him and prevent him from firing his weapon (usually a nasty RPK-16 LMG), which made him a prime target for farming.