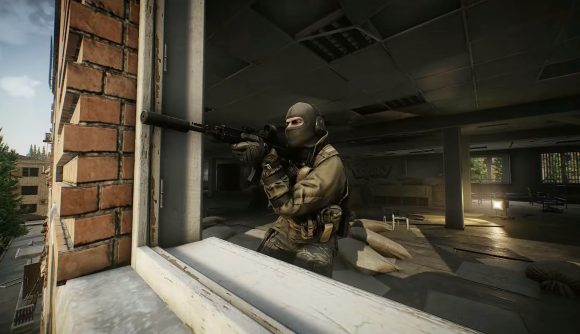 Angry Escape from Tarkov players got their way this week after a mid-wipe update changed the rewards for a particular late-game quest. The update yanked the popular THICC item case from the rewards granted for completing a late-game quest. So many players took to social media and Reddit to complain that Battlestate Games reverted the change, and pledged to make sure players who finished the updated quest would still be rewarded with the case.

Yes, that’s right, it’s called a THICC items case, and it’s an insanely valuable reward – which is why Battlestate Games wanted to remove it from the rewards offered for the Private Clinic quest. To understand why the THICC case is particularly valuable – and why it’s a problem – you have to understand a couple things about Escape from Tarkov. First, what you’re always trying to do is earn money, and one of the limiting factors on this in the beginning of the game is your inventory space.

THICC cases expand your usable inventory space by taking up just 10-15 squares in your inventory while offering up to 196 inventory slots inside. This makes them extremely valuable to newer players who need space to store the gear they find in raids, and the cases will frequently sell on the flea market for 15 million rubles or more.

Tarkov streamer Michael Benson explains to us that selling these cases provide a massive financial boost – while you have to make some in-game investment of time and money in order to earn the reward, you could count on making double your money on Private Clinic – that is, until Battlestate pulled the cases as a reward for the quest, replacing them with standard containers.

“It’s a good change because that quest leapfrogs a lot of the financial hardship,” Benson said. “Basically, I completed that quest and immediately finished my hideout. And now I’ll never have money problems.”

To put it another way, the THICC case as it’s currently offered trivialises a lot of other Escape from Tarkov content, and Battlestate wanted to address that issue. But the timing and communication of the change could hardly have been worse. Some number of players had already begun the quest, sinking money into gear and items they needed to complete it. The backlash was nearly immediate, and Battlestate boss Nikita Buyanov took to the Tarkov subreddit to help calm things down.

“Ok, I get it! Sorry for that change,” he wrote Tuesday. “I guess it was too harsh to do a live change like that. I will not say anything else – cases are changed back. I definitely didn’t predict THAT impact.”

Battlestate says it’s working on finding a way to make sure everyone who completed Private Clinic before the change was reverted is still rewarded with a THICC case.

Players who had their sights set on the THICC payday will be compensated, it seems – but this does only kick the can down the road. Battlestate still has to work out a solution for the progression spike presented by Private Clinic, but it may have to wait for the next wipe to fix it.