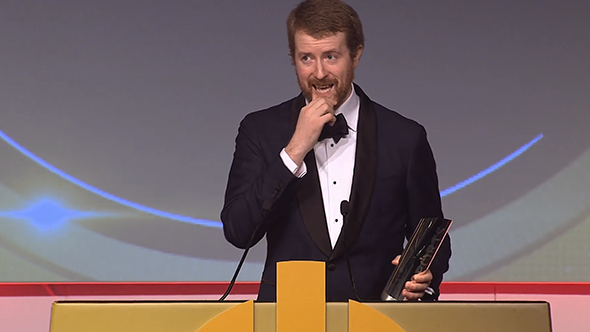 Update 4/12/17: We have issued an apology regarding ambiguities in this article.

Update 3/12/17: We spoke to Richard Lewis in the wake of publishing this article. We would like to make it clear that his inclusion in this feature purely relates to the one-off Dreamhack incident and ban from Reddit, not any transphobic, homophobic, racist or misogynistic beliefs. He also wishes to clarify that the joke made in his acceptance speech was not about the Loda incident but rather a reference to his poor upbringing.

Esports has a problem with representation. Through partnerships, awards, and simple success, the platforms, companies, and organisations associated with esports are being represented by people whose histories include racist, misogynist, homophobic, and/or transphobic views, as well as those with violent or deceptive pasts. You only need to look to the recent Esports Industry Awards, one of the events with the largest profile in the business, to see examples of this.

Everyone attending, including the media and game makers themselves, were there to celebrate the best esports has to offer and everything great that has happened during the year just past – which is well-deserved considering how quickly the industry has grown, supporting more events, players, and talent each year. At the 2017 event, the winner of Esports Journalist of the year was Duncan ‘Thorin’ Shields, a journalist who has worked for the Eleague, DreamHack, and is currently working exclusively for Dot Esports.

In 2014, Thorin was fired from his job at ESL – working at the IEM World Championships in Poland – for a rant against Polish people. He followed it up with saying those in Africa are left “in the dirt” whenever the “developed world” leaves the continent. The ESL’s official statement on the matter reads: “ESL does not stand by or tolerate acts of racism, xenophobia, or other forms of discrimination and does not wish to be associated or employ those who make any such comments.” Despite this, the organisation later hired him for their ESL One series of events. (When we reached out to the ESL regarding this article, they told us that they were declining to comment.)

The same year, he was fired from OnGamers for using the word “retarded” on Twitter. In 2015, he posted a video on female representation in casting where his argument for why there were (and still are) few female casters in esports was because female casters are not good enough. He argued that the debate of whether women should be on casting desks is now an area of “general gender politics bullshit.” He stated it is “ridiculous to imagine [women being inspired by women] as an objective concept.”

Almost a year ago, he put out a ‘females in esports’ video which argued along the same lines, and went into the “genetic” differences between men and women. Earlier this year, he simply denied the claim from SuperData that there is a near 50/50 split of women and men among viewers of gaming videos – he did not elaborate.

While the Esports Journalist of the Year award is determined by a public nomination and a public vote, at no point did the EIA organisers voice any concern with the public’s choice, nor move to exclude him from nomination.

Shortly after the award for esports journalist of the year, Counter-Strike: Global Offensive was awarded the title of esports game of the year. In Valve’s place, the award was collected by Richard Lewis.

Lewis has been banned from the League of Legends subreddit for “sustained, abusive behaviour,” and banned from all DreamHack events following claims he choked a player – police were called to the scene, but Lewis was not charged. He has since taken a picture with a fan making fun of the incident, and referenced it in his own acceptance speech saying without CS:GO the only place he would be on TV was Crimewatch. And so we have a man who has been accused of abusive behaviour representing one of PC gaming’s biggest companies on a worldwide stream broadcast. (Valve, likewise, did not respond to our request for comment.)

To anyone who watched the Esports Industry Awards show or reads about it later, Shields and Lewis are now the face of esports journalism, and major players in the industry as a whole. Their peers are more than happy to celebrate them, as a glance at the EsportsIA Twitter account will show you. Their behaviour is legitimised because they have been recognised and celebrated by the industry.

When asked for comment, Tom Mercey, co-founder of the EIA, provided us with the following statement: “The Esports Industry Awards were created around certain core principle and one of them was to reflect the views of the wider esports community and to recognise the professional achievements of those whom the fans and community deem worthy of that recognition. […] we really feel that we’re living up to our goal of honouring the views of the community and providing a platform on which they can make their opinions heard.”

This problem of who represents esports isn’t unique to the EIA. If you go onto Twitch and watch the top streamers, you can find people like TrainwrecksTV who go on disturbing rants against women becoming streamers. In one stream, TrainwrecksTV says “This used to be a community of gamers, nerds, kids that got bullied, kids that got fucked with. Kids that resorted to the gaming world because the real world is too fucking hard, too shitty, too lonely, too sad and depressing. Now it’s ran by the goddamn same sluts that rejected us.”

Alright so.. I know that folks are sayin things wont change but I’m not gonna stay quiet. This is getting out of hand and @Twitch needs to start holding these partnered streamers accountable. https://t.co/n0LT7iOphe pic.twitter.com/pAPA7g2NN5

Twitch suspended TrainwrecksTV after the above tweet criticising his stream started gaining traction. However, that doesn’t undo the fact that Twitch had chosen to partner with him previously, and continue to do so after his five-day ban ended.

Despite bans, popular streamers are often welcomed back by game developers. The story of Tyler1, a streamer prone to violently aggressive outburstswho had been permanently banned from League of Legends, didn’t just fade away – he became more popular than ever, with other streamers making jokes about and even including him in their content. Recently, Riot invited him back to the game.

Even in cases where a streamer has deceived their fans, major games companies still offer them major sponsorship deals. In 2016, Trevor ‘TmarTn’ Martin was found to be an owner of CSGOLotto, a Counter-Strike: Global Offensive skin gambling site. Martin had been promoting the site without disclosing his stake in the company, or indicating that he was able to fix the odds so that he more frequently won while streaming the site. Despite this, Activision chose to partner with him to promote Call of Duty: WWII.

The most distressing story so far has been that of Li ‘Vasilii’ Wei Jun, who was suspended from all play in League of Legends following a scene of domestic abuse that was caught on-stream. Police intervened and Wei Jun was later arrested. He has been given a 20 month suspension from competitive play.

These are the faces of esports. In the case of Shields and Lewis, we saw them take to the stage at the Esports Industry Awards, their histories ignored and their work celebrated.

But in some ways, things are getting better. Casting desks are, slowly, getting more diverse with people like Lauren ‘Pansy’ Scott, Eefje ‘Sjokz’ Depoortere, and Indiana ‘Froskurinn’ Black gaining popularity. And, broadly speaking, companies are realising that, yes, a toxic community that screams for hatred, sexism, racism, and abuse is bad.

But any such progress is undermined when those that have presented racist, misogynist, and transphobic views, those that are accused of criminal acts of violence, and those that openly break a game’s rules in a damaging way for their own amusement, are put on a pedestal. It is no surprise that women find themselves the subject of abuse in the game industry: earlier this year, a player recorded a game of Overwatch rampant with sexism, and it is by no means an isolated example.

But the Esports Industry Awards – which was covered by news outlets from around the globe – sent out a stark message. Anyone that feels attacked by the esports industry is reminded that the source and product of their harassment are considered by the sector’s gatekeepers to be the best of the best.

Until the face of Twitch’s section of popular streamers is no longer commonly filled with jokes about sexual abuse, and until the big names recognise that certain words are not acceptable, that is going to stay the same. It is imperative that the industry instead supports those participants who are inclusive, and offers platforms to anyone who will help esports and its surrounding culture grow in a more positive direction.

In addition to those mentioned above, we also contacted DreamHack regarding this article – they too failed to provide any form of reponse.