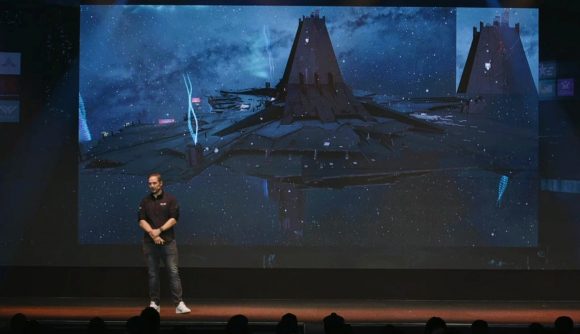 From the outside looking in, adding new custom ship skins to the massively multiplayer space game Eve Online might not seem like a particularly noteworthy change – sure, it’s nice to be able to personalise your avatar and spaceship, but certainly not essential, right? But in Eve Online, identity drives everything – who you are, what you’ve done, and the groups you belong to are critically important to the experience and fantasy. The upcoming heraldry system that CCP Games announced at Fanfest 2022 will finally make it official and allow players to establish distinct visual identities for themselves and their corporations and alliances.

It’s obvious how important heraldry is to Eve players the moment you walk into an event like Fanfest: the throng of players is peppered with custom-printed alliance T-shirts, jackets, and flags. Those icons are common sights on Eve streams and in forums, but the new heraldry system will make them usable within Eve, too.

The heraldry system isn’t just about showing allegiance to a group, however. The new system includes visual modules and add-ons for ships, killmarks, and holograms that will change and grow along with your achievements.

The vision is for fully customisable ships and structures, says Snorri “CCP Rattati” Árnason, Eve Online’s director of product, and it’s been made possible thanks to enhancements to Eve’s art and graphics engine capabilities made over the past couple of years.

“Imagine a future where you warp into a system and go through the gate, and you see that the gate is in the colours of the alliance that controls the system,” Bergur Finnbogason, Eve Online’s creative director, tells us. “There’s a statue of their leader. And you either feel like you’re not welcome, or you feel like, ‘I want to be a part of this.'”

Importantly, Árnason says, the heraldry system won’t be a new monetisation scheme for Eve. Customisation options are unlocked with a new currency called InterBus Credits, which cannot be bought or traded between characters – IBC can only ever be earned through gameplay.

“Every character can generate InterBus Credits through select activities engagement,” Árnason explained during the Fanfest keynote presentation. Most of these activities, CCP says, will focus on interacting with other Eve players.

One way to generate IBC, the developers said, will be to create new heraldry items, which other players and corporations will be able to use.

Heraldry – which includes logos, dyes, attachments, holograms, and more – will eventually be accessible in an updated and unified fitting window alongside the traditional modules you add to your ships.

While IBC won’t be something players purchase, players with Omega status (the paid subscription for Eve Online) will be able to generate it significantly faster than free-to-play players will, Árnason said.

CCP didn’t announce a firm release date for the new heraldry system. However, CCP has said that the rollout of new features will be tied to the new dynamic narrative system, and the first arc of that is currently expected to wrap up before the end of the year. It’s possible we’ll see the beginnings of the heraldry system in that timeframe.