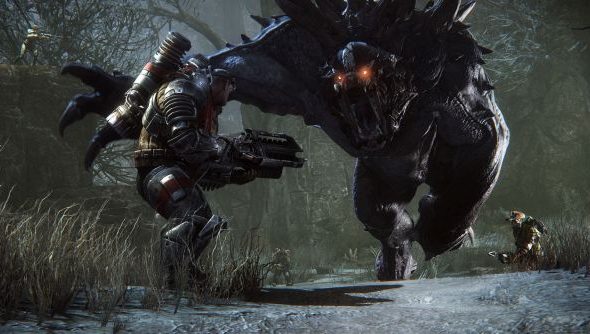 While Evolve has been delayed till 2015 to make sure it’s “genre-defining”, an alpha will be available on PC on October 31st. Access is largely only available to those that pre-order the game, with a select few getting access by registering for it on their website.

As the alpha looms ever closer, developers Turtle Rock have revealed the system requirements needed to hunt some big ass monsters in as smooth a fashion as possible, and they’re not that demanding too.

Whether you’re using a lower-end PC or just value frame-rates over quality: We turned down the settings a bit and turned off AA to get some extra frames on an older test rig in the office.

Not that bad really; easy on your HDD space too. Interestingly there’s no mention on any specific VRAM requirements, which as been a very hot topic as of late, thanks to the likes of Middle-earth: Shadow of Mordor and The Evil Within.

It should probably go without saying however, that things could change between now and release. But how does your PC stack up against Evolve?