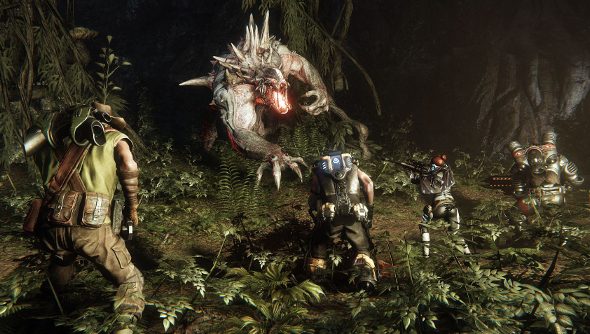 Are you hoping to spend some quality time on an alien planet, hunting down a ferocious monster? Or perhaps stalking a group of invaders encroaching on your territory is more your cup of whatever people drink in lieu of tea in the future and across space. Good news, then, because Evolve alpha keys are being sent out to a lucky few.

The first alpha test is for us PC lot only, and will run from tomorrow until Sunday, August 3rd. Have you discovered your invite in your inbox?

Unfortunately, there will be an NDA, so you won’t be able to boast about your 4 vs 1 exploits. But at least you’ll still be able to share the thrill of the hunt and the kill with your new alpha buddies.

We seem to have encountered a split when it comes to Evolve in the PCGamesN virtual office. Our Rob remains skeptical from his hands-on experiences at PAX and E3, likening it to a version of Left 4 Dead where there’s nothing but tanks. “But for now, I can’t get around the fact that nothing about Evolve seems as interesting as its premise would suggest. Hunter or hunted, I keep coming away from Evolve feeling trapped.”

Steve, on the other hand, had a lot of fun when he checked it out back in February. “Imagine something like Cabela’s Big Game Hunter, except one lucky player gets to control the deer, and he’s an angry, giant deer with the ability to leap over buildings, jump out of trees and crush hunters under its massive hoof. That’s essentially what Evolve is all about. It’s a lot of fun.”

Soon, some of you might be able to get a taste yourself, and take sides in this battle of opinions. Of course, you’ll have to do it in secret. Perhaps you could send Steve or Rob anonymous, perfume-scented letters. “I’m with you, brother,” they could say. And they’ll know what you mean, and it will just make their day.