Let’s talk about that area of travel between your wheel’s full lock and its centre point. Or indeed, the space on your controller between your left thumbstick’s full lock and its centre point. It’s centring the steering after taking a corner, not the turn-in itself, where you really feel a physics model, and it’s here where F1 2021 – which you can buy here, coincidentally – really announces itself.

There are numerous new bells and whistles this year which I’ll get to, I promise. But we don’t play these games for the cutscenes, we play them for the driving. And the driving’s changed in two key areas.

Firstly, the physics model now measures floor downforce. It’s working out how much grip you have not just by how much air is passing over the car and at what speed, but how much is passing under it too. I first realised this by spinning out of the first 50 or 60 apexes I took in F1 2021, and while mentally penning my seething 2/10 review I did some digging. When you take a bit too much kerb and upset the undertray, you lose grip to the rear because there’s air passing under it unevenly – one wheel’s been pushed up into the air, the other still on the track, and when you light up the rear tires you’re taking a trip into the barriers.

This is massive. Esports drivers previously took incredibly aggressive lines through turns, hanging half the car out of the track in the braking zone and flattening the corner by eating into the apex. They set up their cars to race that way, and in doing so dictated how the entire community would drive. You see Enzo Bonito’s time at the top of the time trial leaderboards, you select his ghost, apply his setup, and learn his lines. 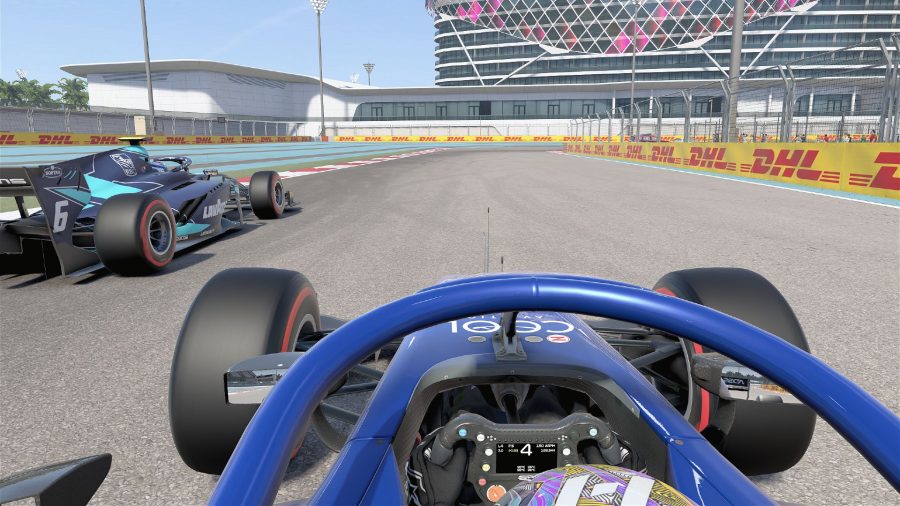 F1 2021’s step towards greater realism with variable floor downforce demands a much more cautious approach. Suspension parameters need to be changed, overall downforce levels revised, and racing lines tweaked to avoid upsetting the rear and losing traction on corner exit. In practice, it means you look at trackside adornments as physical objects, like you would in real life, and thus you think twice about driving over them at 180mph.

Lateral load has been revamped too. Your tires offer varying levels of grip through a corner based on downforce, so the more downforce is being applied to your car, the better your tire performance will be as you move through a corner. In the field, force feedback seems to have been tweaked to convey this in quite a granular way, vibration building up through a corner until you push too hard and the tire reaches its elastic limit. When that happens, the vibration stops, everything feels very light, and you’re spinning off into something crunchy.

Of course, both of these new components to the handling model interact with each other. So if you drive aggressively, take too much kerb and lower your downforce, your tire grip will also vanish at that moment. 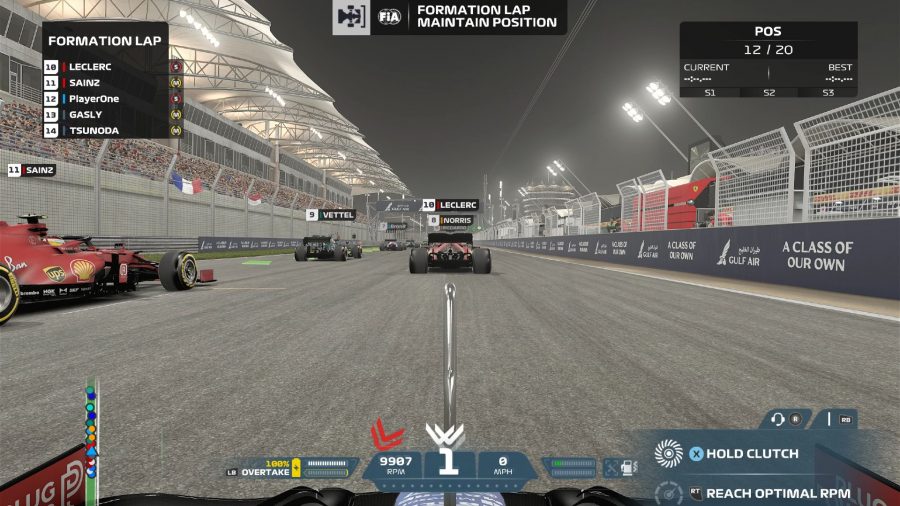 And all of that – years of iterative physics modelling, testing, QA-ing, all of it – is felt in that tiny bit of travel your thumbstick or wheel has between lock and centre point. Which makes F1 2021 perhaps the most demanding of Codemasters’ licensed F1 games since 2010 to drive quickly and consistently. We’re not suddenly talking Assetto Corsa Competizione levels of handling detail and fidelity, but it’s certainly a noticeable step forward towards sim-style handling.

For pad players in particular, the learning curve towards online-ready pace is steep. Whereas a wheel player can hold their angle of turn in and make subtle adjustments as they feel grip giving up, with an Xbox controller in your hand all you can really do when you feel the back end stepping out is lift off, go steering neutral or try to counter-steer. As a no assists controller player, 95% of my own endeavours at correcting these moments have ended ignominiously. Thank goodness for the greatest training aid in racing games, the flashback.

With the handling in fine form, albeit frustrating for the first 10 or so hours, F1 2021’s structural components are next to come under scrutiny. Last year added a team creation and management games aspect that felt so substantial it hardly seemed possible within the confines of an annually releasing series. This year, under EA Sports’ stewardship, we get a story mode. 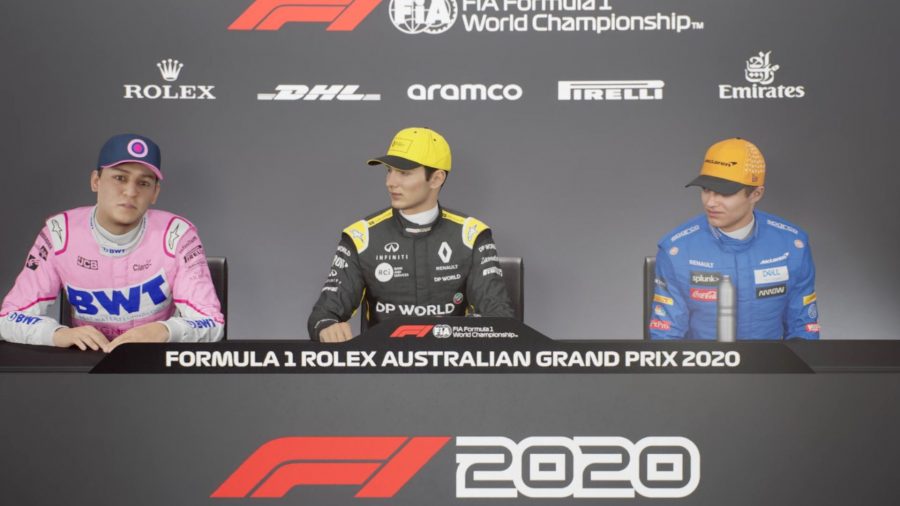 And like the rest of EA Sports’ story modes, this is TV movies fare that sees a wide-eyed young sportsman bumping into mentors and cocky rivals in cutscenes and then doing some racing. I grew quite fond of FIFA’s Alex Hunter by the end of its story mode, but there’s something slightly too plummy about Aiden Jackson, your racing driver proxy, here. It’s nice to move through F2 and into the big league, but it happens very quickly, and your exchanges with teammate Casper Akkerman (basically a Max Verstapen analogue) and waggly eyebrowed antagonist Devon Butler are a bit too broadly drawn. It’s a comic book story really, and given the series’ dalliances with ‘being the driver’ in previous years, it doesn’t feel like it’s breaking new ground.

The good news is that the non cutscene-infused career mode is still roundly excellent, and can now be undertaken in two-player co-op. Doing so means you both sacrifice the usual time-skipping abilities within sessions, but it’s a really welcome addition that adds that extra level of pressure and rivalry to your performances.

Career mode’s RPG-like car upgrade trees and changing driver rosters means it’s a richly rewarding mode and it once again forms a significant part of F1 2021’s longform proposition, particularly the chance to create a team from scratch and build it into a Merc-toppler. 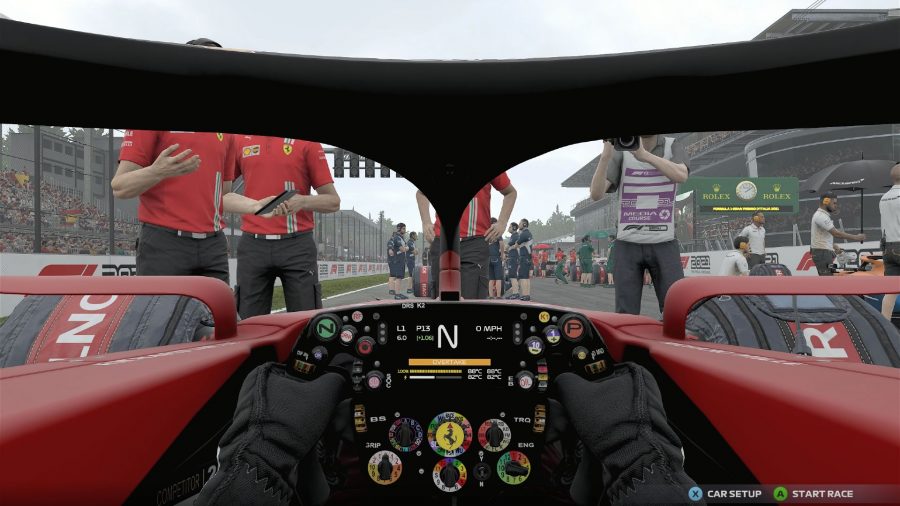 But there’s a hitch. In both career and online racing, visual customisation is a big part of the experience (take a look at RaceDepartment’s incredible helmet and car livery mods, year after year, for a sample of how much the community values visual personalisation). However, there are very few items in the Deluxe Edition code we were provided. Just three customisable livery designs, a scant handful of race suits and gloves, and fewer helmets in a Codemasters F1 game than have ever shipped before, since 2010.

As was the model for the last two releases, we’ll be given a trickle more of each as seasonal Podium Pass rewards throughout the game’s lifespan. Most racers would surely have all that content upfront, but that in itself isn’t the problem.

Launching with such a brazen scarcity of content is. Not only does it limit the amount of content that can be modded by the game’s truly talented community, it strong-arms you towards playing a certain way in order to unlock rewards. There’ll be some who would consider this typically indicative of EA’s new stewardship of the series, and while the business reality behind this scarcity of content is likely a good deal more complex, it doesn’t exactly silence those voices. 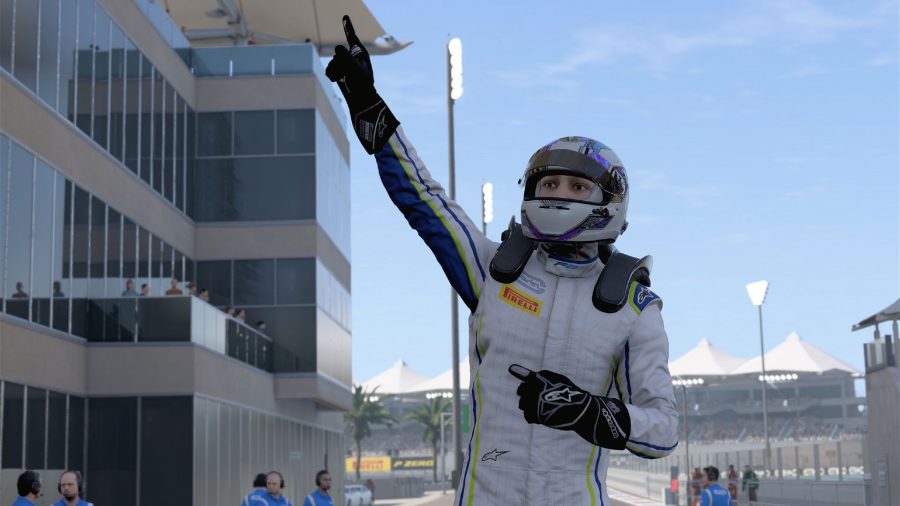 Too much sterling work has been put into F1 2021’s handling, presentation, and the structure of its career mode to write it off on those terms, however. Along with the aforementioned driving changes are subtler step forwards visually and audibly. Grass is all 3D now, rays are traced (if you have the prerequisite RTX GPU, although the options are still unavailable on my RTX 1080 ti build). The colour palette is more photorealistic, mimicking the muted colours of TV coverage over prior games’ bolder grading. Engines whistle with newfound fidelity. Even if you played F1 2020 to death, it feels like a new game.

A new game. Nothing like the progress that last year’s somehow managed to pull out of the bag, but it’s enough. At least, it appears that way in the odd multiplayer vacuum before launch.

Only then will we see how well the new server types – for both casual and competitive players – hold up and deliver fair racing. We’ll also get a feel for how widespread the bugs and issues that cropped up in my review experience are (one corrupted save, a handful of crashes, a raytracing no-show, some odd formation lap AI behaviour, and counting). 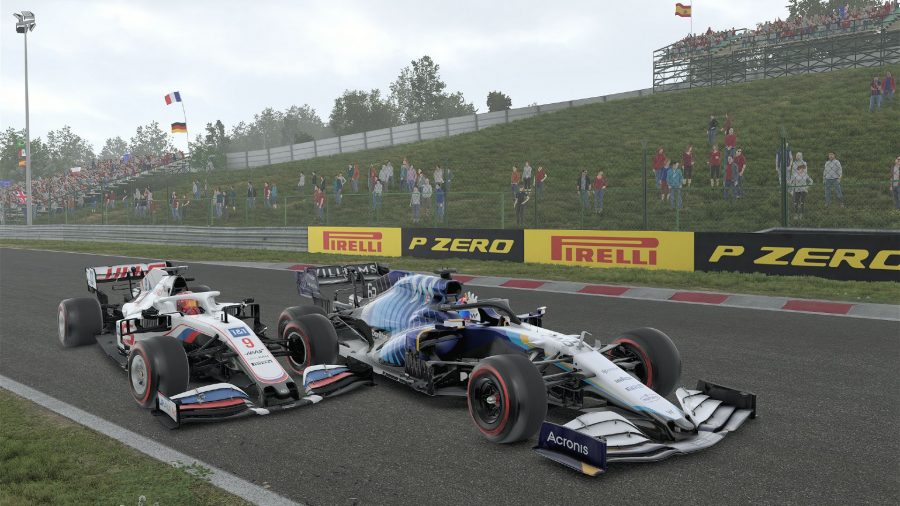 I’ve managed to convince both myself and another human into a co-op career mode, and I consider that a pretty decent bellwether for how fundamentally attractive this game is as a time investment. Ultimately, the tougher, twitchier handling I hated at first has proven to be the biggest draw this year, while the cinematic story mode feels like a high budget irrelevance, and last year’s big innovation in team ownership feels sidelined by aggressively gated customisation content.

Don’t forget, you can buy F1 2021 here. It’s undeniably better when you play with one of the best PC steering wheels, but gamepads are welcome too. And if it’s been a while since you last checked into the series then here’s our F1 2020 review.

Much like the sport itself, the driving is as impressive as ever. But the worries about management’s business practices endure, too. Fundamentally, F1 2021 is worth it for the handling model.