The loss of Lionhead and the premature shutdown of what would have been its last Fable game are still fresh wounds. But now we are hearing that Fable 4 is almost certainly being made. Could it really be that we’re returning to Albion again so soon? I know what you’re thinking, because I’m thinking it too: please don’t hurt us again, especially while in such a vulnerable state.

We’ve been left in hopeful trepidation even after the game’s absence at E3 2018. One of the acquisitions Microsoft announced during its E3 conference was Forza Horizon developer Playground Games. This only strengthens the rumours that the UK studio is working on an open-world RPG, and that it is Fable 4.

The Fable games that made it off the Xbox remain some of the best RPGs on PC.

It sounds too good to be true. But then, that’s Fable tradition in itself, isn’t it? A missing marriage feature here, an over-promised acorn tree there. Impossible dreams are as much a part of Fable and Lionhead’s history as anything the studio actually put out – the emotional AI of Milo and Kate, or the bizarre village-building simulation of Project Opal, which was connected to a fishing game for phones. Or something. Even those who worked on it don’t seem entirely sure what that one was.

But while Lionhead is no more the people who used to work there are still around. Some of them worked on a game called The Sexy Brutale, which sounds every bit like an idea that should belong on Lionhead’s list of cancelled game ideas – its concept is wildly exciting, but seems like it’s too brave to live. Here’s the good part: it actually made it to release, and now exists to play as a short-form adventure. It’s the perfect game to tide you over until we actually find out if Fable 4 really is happening.

The Sexy Brutale is the story of a gambler who wins big and builds a mansion to match – a maze of lavish interiors encompassing a casino, chapel, and a theatre for amateur productions. Walk through one door and you might find a room dedicated to a disturbing portrait or an audacious statue; try another and you could stumble across the bar that serves your favourite poison, so long as that favourite contains, ah, actual poison.

About that: there’s a party happening at the house when you arrive, and the staff are killing off the guests. Potter about the place and you’ll witness all kinds of elaborate murder: belltower hanging, on-stage electrocution, and death by giant spider. Agatha Christie wishes she wrote that one.

Then you’ll witness it all over again. The Sexy Brutale runs in real-time but there’s a big timer looming over your every move and decision. When that timer ticks all the way down the macabre evening comes to an end and then rewinds back to the beginning. Each murder happens at its allotted time, every doomed character stuck to their tracks like the dancing figures in an automaton clock. Unless, of course, you should do something to shove them off their rails.

The premise reads like a preview of a Lionhead game you’d find in a British magazine in the early ‘00s. You can visualise it quite clearly: the words wrapped around concept art of a man with a handlebar moustache wearing a monocle. Over six pages, there are maybe three actual screenshots. There’s a pull-out quote from Peter Molyneux, which says something like, “Why shouldn’t we play with time? Did I not make gods of gamers once before?”

And of course it never comes to pass. Perhaps a game does come out, but it’s on XBLA and the time-turning mechanic has been reduced to a minigame about flipping an hourglass as many times as you can in a minute. Or it’s cancelled, and Molyneux says its ideas have been folded into the next Fable game, which is itself cancelled, and then Christmas is cancelled too.

Only The Sexy Brutale did come to pass. Cavalier Game Studios, backed up by Rime developer Tequila Works, found a way to make its high-concept idea cheaply and convincingly. Viewed from an isometric perspective, the game renders its guests and killers as bobble-headed characters – more GoldenEye’s Big Head mode than Funko Pop Gears.

Masquerade masks make each character distinguishable from a distance, and play into the game’s larger themes – it’s a mask that first lets you break free from the time loop that has every other guest trapped.

The mansion is similarly amplified in a fashion that makes a virtue of low-detail environments – gothic but not dreary, coloured by deep shadows and almost lurid splashes of colour. At the end of each night, blood literally rains down on the plush carpets and marble floors of the Brutale.

Dialogue is handled entirely through text – there’s a mechanic that lets you strain to hear the quietest mutterings of nearby guests, which often yields revelations about the house and its secrets and allows you to better avert disaster. Passing on voice acting not only saves Cavalier and Tequila the kind of expense they would struggle to justify on a small project, but feels like a crucial design choice – important clues are highlighted in red when eavesdropping, letting you identify the pieces of each puzzle as they float past on a sea of storytelling. 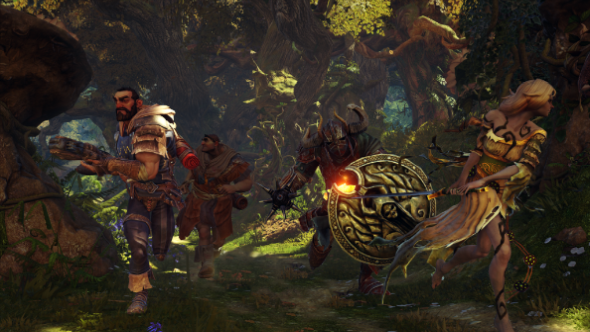 Of course, it would be nice to hear characters like southern US opera singer Tequila Belle speaking in the exaggerated accents and dialects of Lionhead’s latter-day projects. But to dwell on that is to miss the point – this is a Lionhead-style game that never could have been, if not for the diminutive form its creators have found for it. The Sexy Brutale might be a ‘little’ game, but that’s exactly what’s allowed it to be large in ambition, the way Peter Molyneux’s best ideas always were. It’s the same ambition that means we care about a Fable 4 in the first place.

When Fable 4 does come out, as we’re now fairly confident it will, there’s a strong chance it won’t have that familiar whiff of Lionhead compromise about it. That might be for the better, but if you’re already missing that sense of unfettered ideas, The Sexy Brutale has it in spades. After all, this is a casino: what deck of card doesn’t have spades?