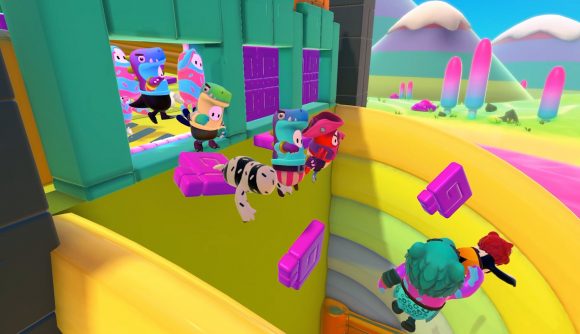 Not even Fall Guys is safe from hackers. Since the cute bumble royale stumbled onto the scene, players have taken to using cheats and exploits to snag victories. Mediatonic initially swapped up how its detection system works to boot them in the middle of a game, and stop them from using an exploit that came from creating new family-sharing accounts on Steam. The developer’s latest attempt to kick cheating to the curb is now here.

The multiplayer game’s social media manager reveals on Discord that the new update introduces the same anti-cheat system that Fortnite uses. We had an idea this was coming, but didn’t have an exact date. If you’re unaware, Fornite uses the Easy Anti-Cheat, which is developed by a company called Kamu that Epic Games bought back in 2018. The same anti-cheat is also used in Apex Legends, The Division 2, Gears 5, and many more.

We also got a story recently about the rise and fall of Cheater Island. Basically, Mediatonic used to banish cheaters to a game lobby where they’d all play against each other. The results are as amazing as you’d think, but Cheater Island swiftly ran into population issues.

If you’ve not seen Fall Guys cheaters, though, seeing those hacked beans is as odd as you’d think. Fall Guys cheats involve players making their jelly bean faster than everyone else’s and immune to being knocked back by various objects. While it’s all quite amusing to see in action, it’s good that it’s being looked into. You can check out some jumping beans in action down below and get the full story of Cheater Island:

Somebody actually uploaded this video to Reddit with the title:

"Ever played a round of Fall Mountain where all the players are cheating?"

The problem is… this LOOKS like Cheater Island but we can't be 100% sure pic.twitter.com/byJi6r0Ykc

Alongside other tweaks, today’s update also introduces a big chonking hammer called Big Yeetus to Fall Guys. It’s, well, a big hammer that’ll randomly show up in your game and hoof you into the great beyond. Big Yeetus’ beauty is in its simplicity.

If you’ve not played the multiplayer game yet, we’d recommend it. In her Fall Guys review, Jen explains “Fall Guys’ ingenious game show royale formula is a recipe for success, and its gameplay is full-fat unadulterated fun”. She also compares it to contraception – so you should read it.

Fall Guys has been – or should that be bean – a roaring success since it bumbled out of its beta. The Fall Guys sales came in at two million for its first week on Steam, which isn’t too shabby at all.