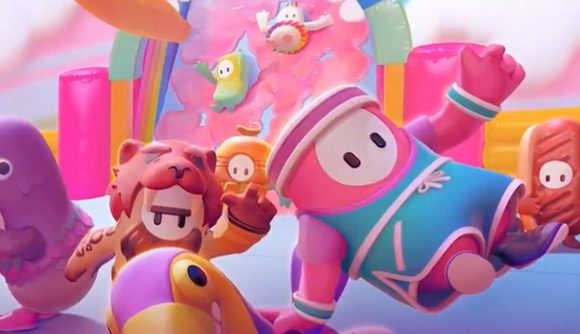 Fall Guys are used to being jostled around a bit, but they’re about to get a lot more jostled. Developer Mediatonic is teasing a new addition to Fall Guys that it calls ‘Big Yeetus,’ and it’s a spinning hammer designed to do to Fall Guys what Barry Bonds did to baseballs.

Big Yeetus is a large, rotating mallet that Mediatonic says will appear randomly in Fall Guys shows to “shake things up”. The official Fall Guys Twitter account shared a clip of Big Yeetus in action that shows a single hapless Fall Guy getting thwacked across a platform of spinning concentric circles (before being squashed by tumbling, giant watermelons).

I've got a SPICY LEAK for you all

We're working on a little something that we have been calling…

Big Yeetus will randomly appear in levels – to shake things up

Big Yeetus is not your friend

A lot of people are doubting that BIG YEETUS is actually real, so here is the receipt

Mediatonic hasn’t said when you can expect to see Big Yeetus in Fall Guys, and it’s possible they could even scrap the idea if it doesn’t work out as well as intended. But it’s neat to imagine the idea of randomly occurring new threats and obstacles in courses we’ve already gotten to know well since Fall Guys launched.

If Fall Guys isn’t your cup of tea, we have a handy list of alternative battle royale games you might like to try (you complete monster). As we gear up for Fall Guys Season 2, we’ll have to keep an eye out for Big Yeetus – and any friends it brings along.