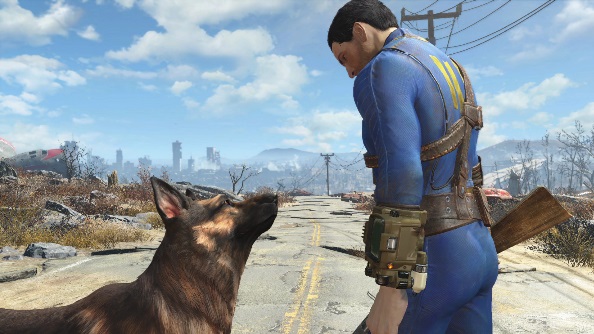 NB: This is our port review of Fallout 4, specifically analysing its performance on PC. Check out the following link for our full Fallout 4 review.

Fallout 4 has launched on PC, giving us a new version of Bethesda’s Creation Engine, a new post-apocalyptic wasteland and, for some people, a whole host of new bugs and performance issues to worry about.

Traditionally, Bethesda’s open world romps have been more at home on PC than consoles – though the PC-like PS4 and Xbox One have brought things closer to parity – and after hours of traipsing across the wasteland, hunting super mutants and putting welding goggles on dogs, I can say that tradition has been upheld.

Caveats are, of course, forthcoming. 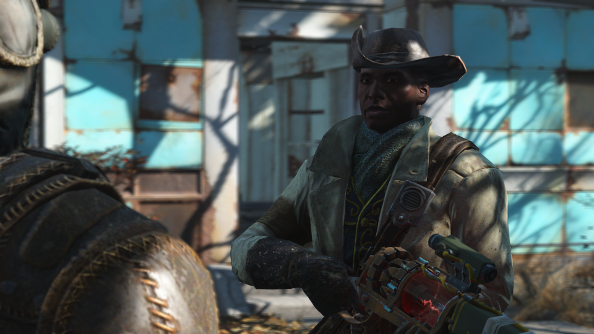 Having recently replayed Fallout: New Vegas, I was immediately struck by the visual improvements lavished on Fallout 4. The Boston wasteland is a huge expanse of diverse terrain and settlements, brought to life with lighting both subtle and overt, and countless tiny details.

New Vegas is five years old, though, and running on an engine two years older, so significant changes should be expected. Compare it to Skyrim, itself four years old, and the improvements are less massive. They are there, of course, particularly when it comes to lighting, but so are many of Skyrim’s visual failings.

For every detailed texture, there’s one that looks like it should never have made it past QA, and no amount of lovely lighting or fancy weather effects – of which Fallout 4 has many, and they are a delight – can hide just how awkward the character animations look, or how hideous and alien many of the faces look. 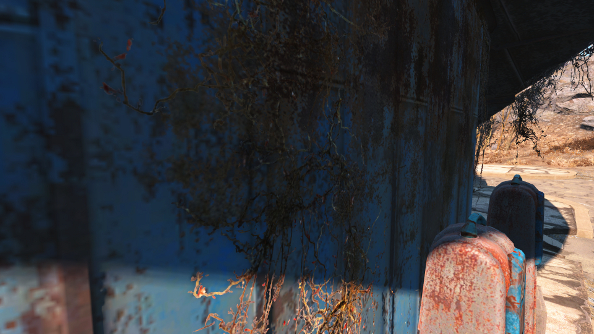 Like Skyrim, Fallout 4 is a game that’s blessed with impressive vistas and scenes that, at a glance, look impressive, but once you look closer, immediately begin to look dated. It’s good looking game from five years ago, with the benefit of a few modern tricks.

Dated does not mean ugly, however, and Fallout 4 is absolutely the best the series has ever looked, not just in terms of fidelity, but art direction as well. Settlements are full of varied architecture and buildings modern and historical each oozing personality. Out in the wilderness, the atomic blue and green wasteland of DC and the sun-scorched Mojave desert seems worlds away, replaced by diverse, colourful environments rich in clutter and abundant with life.

All this is achieved without compromising the overall style of the series. Post-apocalyptic Boston is undeniably Fallout. 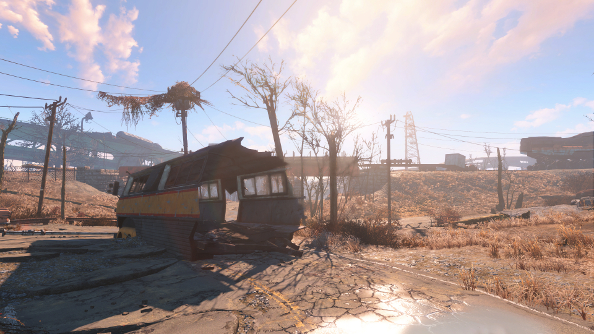 Graphics options cover most of the bases, though it’s frustrating to only be able to change most settings via the launcher rather than in-game. Along with anti-aliasing, anisotropic filtering, and the various qualities of textures, shadows, decals and lighting, you can also fiddle with several view distance sliders that deal with specific objects, like NPCs or grass.

Further tweaking can be done by turning off or on rain occlusion, which keeps rain from appearing or splashing on the ground when you’re under cover; wetness, which gives you that ‘I’ve just finished swimming in an irradiated swamp’ look; screen space reflections, which adds glossy reflections to surfaces; lens flare, because sometimes you want to burn your retinas; and motion blur.

Four presets have been put together, from ultra to low, and should you wish to spin the dice, you could always let the game auto detect the settings. I wouldn’t advise it, though. In my case, the game was a tad optimistic. On the other side of the spectrum, GeForce Experience was overly conservative. So expect to do a bit of tweaking before you get the performance you’re hoping for. 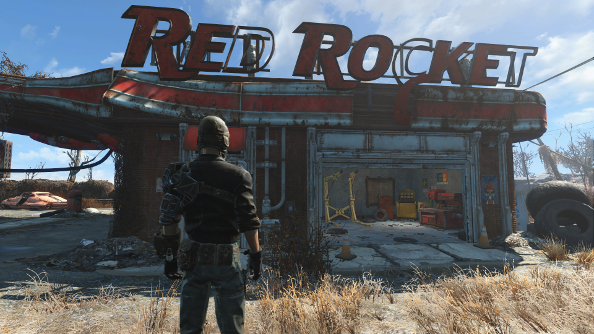 On the ultra setting, with TXAA anti-aliasing enabled, the game looks its best, and on my now slightly dated (aside from the GPU) rig, the performance cost is surprisingly minimal.

Indoors, it’s rare for the frame rate to dip below 60, even when all hell breaks loose and explosions and screaming androids fill the screen. Even outdoors, things remain mostly steady, occasionally dipping to the low or mid-50s.

It wasn’t until I hit the built-up area surrounding Diamond City, the game’s largest town, that I considered turning my settings down a tad. I was still able to hit 60fps, but the dips were more noticeable, occasionally reaching the mid-40s, though that’s by no means terrible. 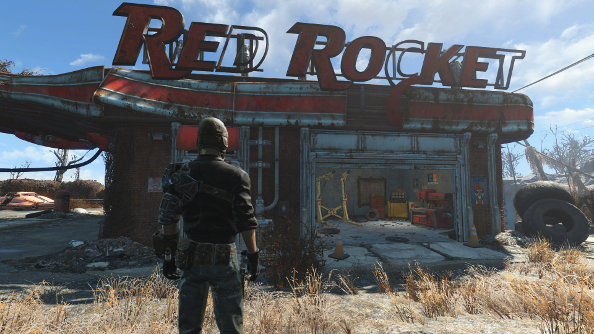 Using the high preset, performance gets a noticeable boost without a significant visual cost. The game looks mostly the same, but in areas jampacked with buildings, it manages to keep a mostly steady frame rate of 60. 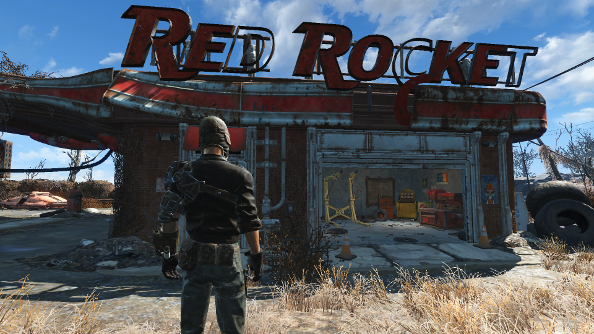 It’s not until using the low preset and by turning off AA that we can see a very clear downgrade, with jagged edges no longer being hidden, shadows becoming harsher, and objects in the distance losing detail or vanishing. In motion, it’s even more obvious as the shadows start to flicker and buildings pop into view.

Here’s another comparison between ultra and low in first-person. 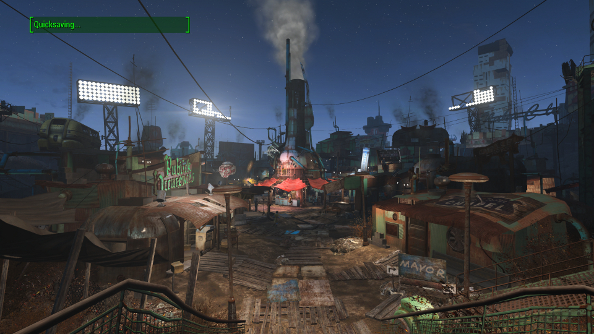 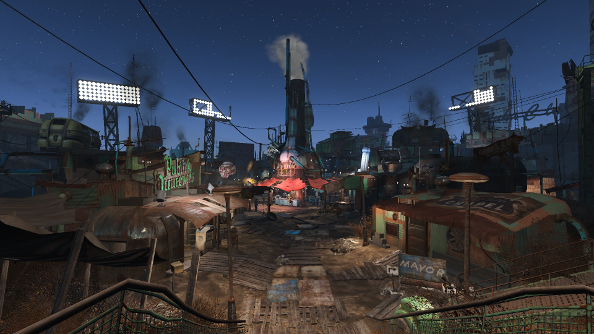 For some reason, certain options have been left out of the settings menu, most notably the frame rate cap and an FOV slider. Thankfully, both of those things, along with several others, can be edited in a pair of .ini files. For instructions on what to edit, take a look at our Fallout 4 FOV tweak guide. You won’t, at least, have to dive into any files to change the keybindings. That can be done in-game, thankfully.

Unexpectedly, given my past experience with Bethesda games, my time with Fallout 4 has been blessedly bug-free, for the most part. Sometimes NPCs get stuck or a line of dialogue gets cut out, but nothing major. Others have reported more serious issues, from CTDs to disk write errors. Check out our Fallout 4 crashes, bugs and fixes article if you do have any problems.

Ultimately, it will be the mods that will give Fallout 4 the sort of longevity that Bethesda’s open-world adventures typically enjoy, in addition to the amazing settlements people are coming up with. In the meantime, however, Fallout 4 is already a decent PC port.

There are problems, yes, and disappointments, certainly, but at its worst Fallout 4 is a functional port, and at its best, a rather good one that offers greater fidelity and performance when compared to its console counterparts. It’s the version you should get, if you have a choice, and this would be the case even without the promise of a mountain of mods.