Thanks to the ever-thriving Fallout 4 modding scene, you can pretty much take on the RPG game’s post-apocalyptic Commonwealth in whatever way you like. That includes strapping your survivor into some Destiny 2-style armour and tackling rads, raiders, and really bad food like a true Guardian – and now, you can enhance that experience even more with a new Fallout 4 mod that gives you one of the FPS game’s ghosts.

Modder ToaZen has posted a new creation to Fallout 4’s slice of Nexus Mods which brings Destiny ghosts to Bethesda’s open-world game. It’s not clear from the description whether it functions in any way, other than being a great prop to sit at your Fallout 4 Guardian’s shoulder, but it certainly looks the part. This particular shell is modelled on Destiny’s Timeswept ghost variant – a legendary version, which was introduced with the shooter’s ninth season and is part of the Sundial gear set.

The ghost is pretty distinctive, with a cream-hued shell and pointy gold prongs – and the Fallout 4 version is totally faithful to Bungie’s design. It takes up slot 55 (the ones for belts, hip-weapons, and satchels) and can be crafted using the chemistry workbench.

Ghosts are a vital component of Guardians’ kit, so it makes plenty of sense that they should come to Fallout 4 to sit alongside the modding community’s existing Destiny-inspired armour. Giving life to Destiny’s player characters and always there to lend a hand in combat, they’re key to the whole deal of being a Guardian. 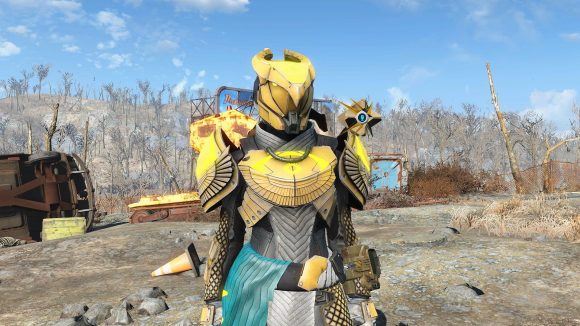 The good news is, if you’re keen to grab one for yourself but have another shell in mind, the modder says on the page that they’re planning to add more variants in the future. You can pick up the Timeswept Destiny 2 ghost for Fallout 4 on Nexus Mods here (and the armour the creator has used by Adventfather here) now, though, if you’re keen to bring a dash of Destiny to the wasteland.