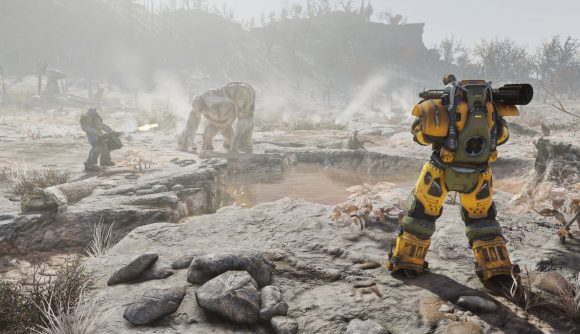 Thanks to the newly-released Fallout 76 Wastelanders update, the online RPG game’s now awash with human NPCs – and while there are some friendly new Fallout 76 allies wandering about Appalachia, it seems some are less helpful. Some have been spotted looting weapons and other goodies from players’ downed corpses.

User Lizardinosaurus has reported the hiccup occurring in one of the game’s new PvE modes, Riding Shotgun, on Reddit (via Eurogamer), saying: “Just lost a BE gatling gun when I died in Riding Shotgun and nearly 2k 5mm ammo only to find one of the NPCs now had a gatling gun.” The player says in the comments they died in an in-game explosion, then “ragdolled”, with their character’s corpse ending up “next to the NPC that picked up” their gun during the respawn timer.

“Just to be safe don’t use you’re best/rarest weapons in events like Riding Shotgun just in case one of the NPCs decides to steal it,” the player advises. It seems they were unable to reclaim the weapon, because, as they explain, the NPCs “spawn with a random inventory from a predetermined loot pool so even if they died you would only get what they normally drop”.

It doesn’t appear to be common occurrence by any means, but it does seem to have cropped up for a few players in the game’s PvE missions, with what appears to be an example in the clip below linked in the post’s comments. It seems the player’s weapon ends up in the hands of naughty NPC Marion Copeland after they’re downed nearby:

It’s clear this is just a bug, and one that’ll likely be ironed out very soon. A Bethesda associate community manager has posted a reply, saying the studio “will investigate this immediately”. Phew. Looks like your gear will be safe from pesky NPCs soon.

In the meantime, if you’re on the hunt for some gear in the new update, check out our guide to the Fallout 76 compound bow location. If you do pick it up, just be sure to keep an eye on it, in case any NPCs fancy a go.