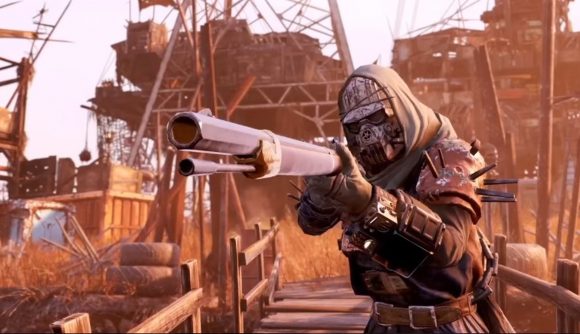 Bethesda delivered a look at the upcoming free Wastelanders update for Fallout 76 while showcasing at PAX East this weekend. Coming in at around 20 minutes, the footage is a substantial preview of what’s coming to the nuclear MMO.

The central tenet here is that it brings NPCs to the wasteland, which affects the game in two major ways. First, campaign missions will now be dotted with characters that deliver information or what have you, and second your Charisma will become more important as it defines how well your interactions here go.

A group of Fallout 76 developers provide commentary to the gameplay, lead designer Ferret Baudoin discussing the lengths they went to to get the conversations feeling just right. “We get to go back to one of the strengths of Bethesda, the conversations,” Baudoin said. “We’re trying to connect with you, with human beings, with emotions. Trying to give you a real impetus for why you’re doing the things you’re doing.”

What’s shown is exploration heavy, playing on the density of this new cast and the ways they’ll be changing the standard Fallout 76 experience. Another of the panel, design director Mark Tucker, comments on how this will flesh out the world players are already familiar with.

“Before, we were doing a lot of interesting quests for characters that had effectively died before you came through,” Tucker says. “Now you get to see these characters, interact with them, and there’s some very memorable ones in the line-up.” That last part matters in more ways than one, since one Jason Mewes, of Jay and Silent Bob fame, appears as Mort the ghoul later on.

Fallout 76 has had a rocky go of it since launching late 2018. There was the Fallout 1st debacle, and hackable exploits, which has made playing and being in the community a bit of a drag. We’ll find out if Wastelanders helps raise the game’s overall profile on April 7, which is conveniently when Fallout 76 also hits Steam.