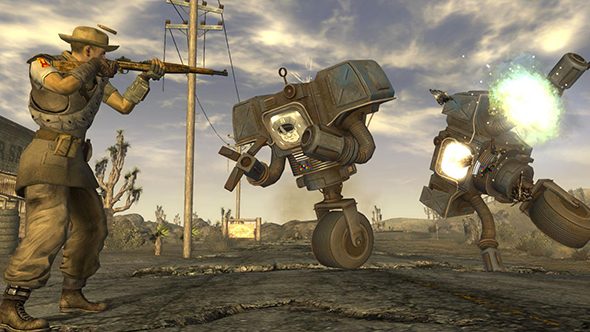 Fallout: New Vegas is one of the most beloved games in the series, and we have it because Bethesda decided to hand off one of its core games to an external studio. Obsidian’s take on the 3D Fallout formula offered players plenty of tough choices and excellent character writing – but don’t expect another non-Bethesda take on Fallout any time soon.

Bethesda director Todd Howard says that the studio is reticent to outsource any future game projects. “I wouldn’t say never,” Howard says. “[But] now that our company is so big, it’s always better to keep stuff internal … it becomes less likely, but I could never say never. I thought the Obsidian guys did a fabulous job.”

You’ll find plenty of Obsidian work on our list of the best RPGs on PC.

That comes via an interview with The Guardian. It seems that’s the case for the core games, though not necessarily for the spin-off titles. Elder Scrolls Online, of course, is developed by ZeniMax, and mobile-first titles like Fallout Shelter have been handled externally. Though that may be changing with The Elder Scrolls: Blades  in development at Bethesda Game Studios proper.

So don’t hold your breath for a big-scale Elder Scrolls, Fallout, or even Starfield to come from any place other than Bethesda. Obsidian made a special game – that’s why we ran a series on the making of Fallout: New Vegas last year – but we’ll just have to cherish our memories of it.

But for the future, we’ve got both the Starfield release date and Elder Scrolls 6 release date to look forward to.