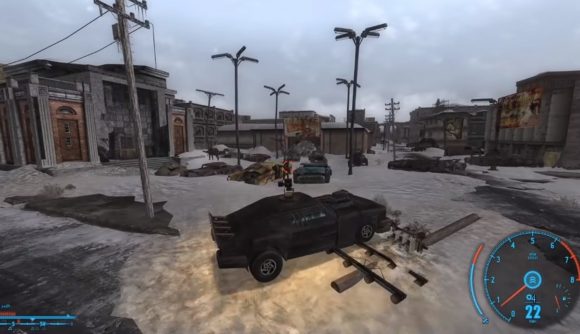 A new mod is bringing driving to the wasteland. Fallout: New Vegas – The Frontier is a huge upcoming mod for the RPG game that introduces what the creators believe is the best driving system you could find in a Bethesda game.

In a recent trailer, the team behind The Frontier showed off what getting behind the wheel of a car will look like, and when players will get a chance to try for themselves. Going by the footage, using an automobile will be tight, effective fun, allowing you to mow down anyone who crosses your path on the post-nuclear roads. What’s better, it won’t be long before we can have a crack ourselves, since The Frontier comes out on January 15, 2021.

In a dev log video, one of the members hypes up the mechanics the modders have created. “This is by far the most complex, realistic, and gameplay viable variation of a car system for any Bethesda title ever,” he says. “It’s the closest we will ever get to a proper driving system outside of a low-level integration from Bethesda itself.” The video confirms a day-and-date release on both Nexus and Steam, so The Frontier will be easily found.

Away from all the roadworks, the mod has a lot of story content besides. You can choose betwen the NCR, the Crusaders of Steel, and Legion amid three major questlines, and over 50 side-quests. Boss battles, and a mix of ground and air battles are included in the barren dystopia that’s become of Portland, which suffers fluctuating dynamic weather.

You can see a demo of the driving here:

The dev log explaining the release date is here:

You can find more on The Frontier’s official site. This release comes as Fallout: New Vegas celebrates its 10th birthday this year. Josh Sawyer, the game’s director, held a pair of charity livestreams earlier this year as a way of acknowledging the milestone. The streams are essentially director’s commentary, so they’re worth a watch if you’re curious.