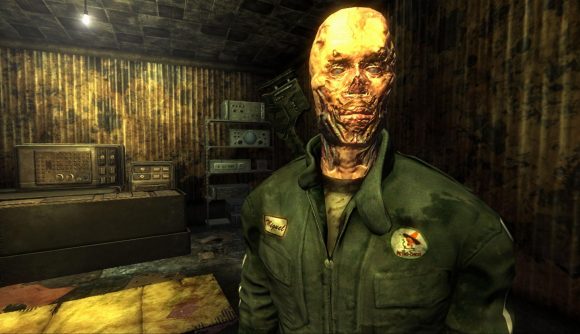 One of the lead developers of Fallout: New Vegas is celebrating the RPG game‘s tenth anniversary with a pair of charity livestreams. The streams, the first yesterday, and the second today, will involve playing and discussing the open-world game while taking donations for the California Wildfire Relief Fund.

Josh Sawyer, the director of Fallout: New Vegas, and studio design director at developer Obsidian Entertainment, is hosting two marathon charity streams on Twitch for a decade of the Fallout spinoff. During the streams, viewers can donate money to California Wildfire Relief, a non-profit that assists people and services affected by Californian wildfires. Each dollar of a donation earns you at least one ticket in a raffle for the last remaining Mojave Express patches, real life versions of those seen in New Vegas.

The version being played isn’t any regular New Vegas – it’s using the JSawyer overhaul mod, a quasi-director’s cut mod that fixes, fine-tunes, and re-balances the action-adventure game. The alterations are largely things the team had hope to include in the finished version but couldn’t due to time restraints.

A Fallout: New Vegas sequel has been something the Fallout community’s clamoured for ever since we saved the Mojave Wasteland. Since Obsidian was acquired by Xbox Game Studios back in 2018, and Fallout publisher Bethesda’s parent company ZeniMax Media was purchased by Microsoft in August, it’s hoped a Fallout: New Vegas 2 might happen – but your guess is as good as Obsidian’s.

You can check out the first six hour stream of Sawyer’s here:

You can check out Sawyer’s stream today from 10:00 PDT/13:00 EDT/17:00 GMT. Obsidian has a full slate at the minute regardless, between Grounded, and upcoming Skyrim-like Avowed. The studio’s latest RPG, The Outer Worlds, just hit Steam.