Final Fantasy has a legacy on console, but as the years have rolled on, not only has the series landed on PC, but it’s become the definitive place to play it. The latest mainline entry, Final Fantasy XV, looks and plays best on PC, while the ongoing MMO success story Final Fantasy XIV is naturally at home alongside favourites like World of Warcraft and Guild Wars. Then there’s the fact that all the games from the golden era of Final Fantasy are conveniently available on Steam, often with HD graphics and extra features like achievements, speed-up modes, and cheats. What? Cheating is a feature.

All this considered, I got to thinking about what the next step for this venerable series could be. In a recent interview, Final Fantasy XIV director and producer Naoki Yoshida said that he would like to see a new game that returns the series to its classic fantasy roots, and gets away from the high-tech aesthetic that has proven popular in recent years.

But how likely is that to happen? The answer may lie in Final Fantasy’s storied history, as well as goings-on around other Square Enix projects.

Who will develop Final Fantasy XVI?

Final Fantasy XV famously spun out from Final Fantasy Versus XIII, a game originally conceived by character designer turned game director, Tetsuya Nomura as a more realistic take on the series’ themes. Nomura left the project in the midst of development to focus on Kingdom Hearts III, however, and was replaced by Hajime Tabata. Recent statements by Nomura in interviews suggest that Nomura is less than happy about how XV turned out – but it doesn’t seem as if he’ll have any opportunity to change the direction of the series himself.

Now that Kingdom Hearts III has launched, Nomura’s attention will turn to Final Fantasy VII Remake, the multi-part reimagining of the 1997 classic. We can expect VII Remake to come to PC eventually, but it will start life as a PlayStation timed exclusive. 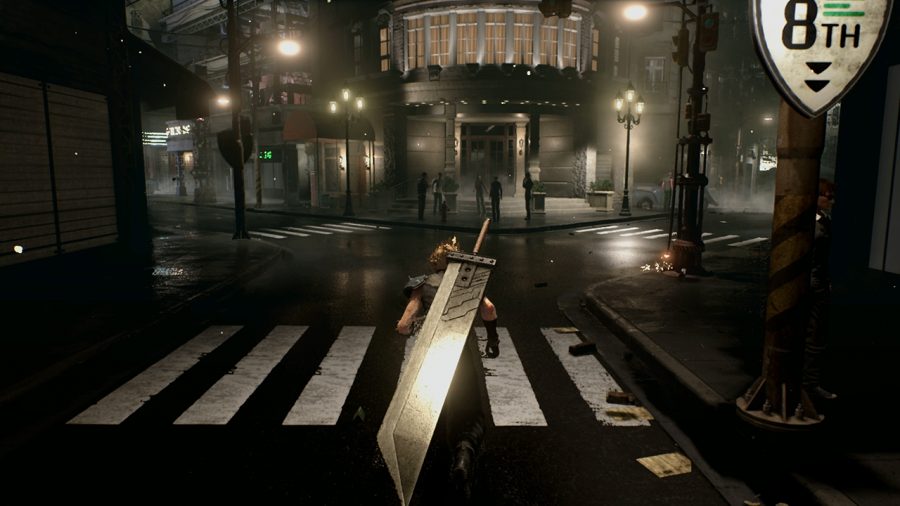 Square Enix has already confirmed it will divide the Remake into multiple games, and by all accounts, we’re looking at least three to tell this epic story. Once they’re completed, Nomura will likely move onto the next stage in the Kingdom Hearts series, teased in the secret movie of Kingdom Hearts III (more on that later). In other words, Nomura’s schedule appears to be full for the next half a decade. Given that Final Fantasy XV director Tabata has since left the company, it seems likely that a new leader will step in to develop the next mainline title in the series.

Who could fill the director’s seat? There are two frontrunners. A new game with Yoshida at the helm would almost guarantee a return to a more traditional style, while in gameplay terms it could incorporate elements of XIV’s MMO stylings. That would put it in the same territory as Final Fantasy XII, which got a remaster on Steam last year.

The wildcard choice is a name that JRPG fans will already be intimately familiar with – Yoko Taro. Taro is the mad genius behind the Drakengard series, but you’ll probably know him for its spin-off series, Nier. Square Enix published Nier: Automata in 2017 to plenty of critical and commercial success, raising Taro’s profile across the game industry to Kojima-like levels. Automata was an idiosyncratic and delightfully odd post-apocalyptic adventure, that offered a somewhat more mature take on the philosophical themes running through the heart of Final Fantasy.

An executive producer at Square Enix, Yosuke Saito, has expressed his desire for Taro to work on the Final Fantasy series, while Taro himself has said he’s eager to do it – so long as he gets a big budget to work with. Taro has already had direct involvement with the series, confirming at Paris Games Week that he had helped to design a Nier-themed raid in Final Fantasy XIV. His games are dark, cerebral, and decidedly more adult than typical Final Fantasy fare, so putting him at the helm of a new mainline game would be a weird and fascinating direction for the series. Taro has worked across a variety of different aesthetic styles, so I have no idea what form this game could possibly take, but I do know that I’m well up for it. 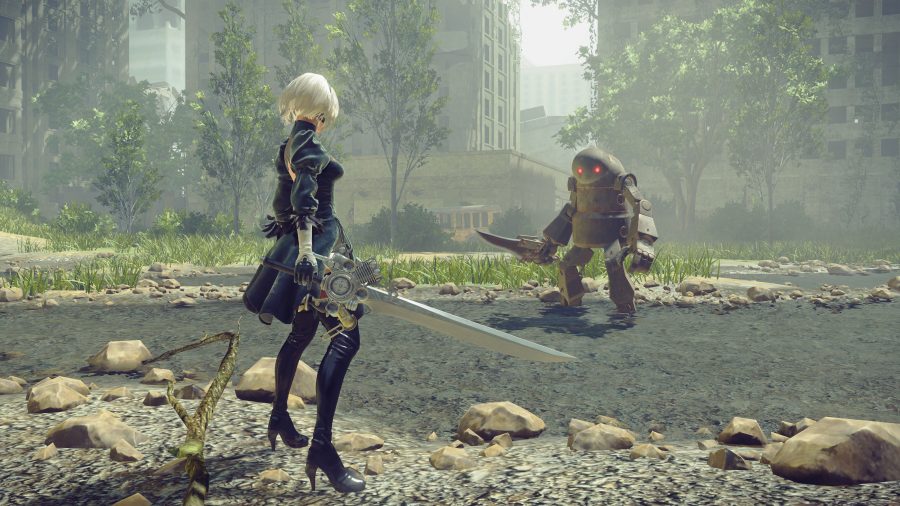 Will XVI have a traditional fantasy setting?

When Final Fantasy first debuted on NES, it was steeped in traditional fantasy tropes, borrowing heavily from the Tolkien-esque style that had already been popularised on the console by The Legend of Zelda. As the graphics modernised, so too did the settings on offer in Squaresoft’s flagship series. Final Fantasy VI was the first to introduce mechs into the universe, and when the 3D era took off, Final Fantasy was propelled headfirst into the realms of science fiction.

After the phenomenal success of Final Fantasy VII and VIII, both games with a more realistic, futuristic aesthetic, Square decided to take the series back to its roots with Final Fantasy IX. That game cast off the mechs, rockets, and skyscrapers, in favour of castles, dragons, and airships. While later on in the story there were some tips of the wizard hat to the stargazing of more recent titles, the overall tone of the game had its feet firmly planted in the swords and sorcery that gave the series its start.

As in 1999, in 2019 we find ourselves emerging from a tech-dominated era of Final Fantasy, one which has taken the series to new and exciting heights. With Nomura out of the picture (for now), XVI offers a blank slate. Perhaps we’ll get a throwback to simpler times. 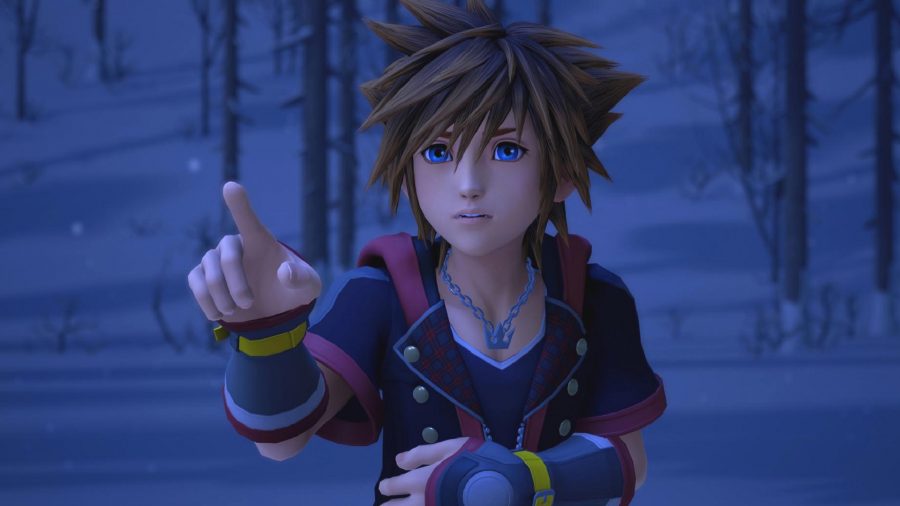 Those who took the time to gather all of the Lucky Emblem collectibles in Kingdom Hearts III were rewarded with a secret post-credits scene that hints towards the future of the series. What’s interesting for us is the implications the teaser has for the wider Square Enix canon, and where Nomura’s future games will fit into this line-up.

At the end of Kingdom Hearts III, the long-running story arc that began in the first game was finally concluded, with the defeat of the series big-bad Xehanort. While the universe of this Disney/Final Fantasy mash-up is safe at last, protagonist Sora learns his journey is not over. Once the dust has settled on the final battle, Sora sets out to rescue Kairi, who has been lost to darkness (if you have to ask, you don’t want to know). We know Sora succeeds in this quest because we see Kairi safe on the Destiny Islands in the epilogue – however, her rescuer is mysteriously absent. What happened to him? The secret movie gives us an answer.

Ok, strap in if you’re not a fan of Kingdom Hearts, because what follows is going to sound pretty bonkers. After the credits have rolled, we see Sora wake up, dazed and confused in real-life Tokyo. Yep, they went there. As the scene plays out, we see another major character, Riku, has also arrived in Tokyo and is being watched by Yazora – a character from a fictional videogame we see in the Toy Story world. I know, I know, but stick with me here. The fake game that our heroes appear to have woken up in is Verum Rex – a game that bears a striking resemblance to Final Fantasy Versus XIII, Nomura’s magnum opus that was cancelled and reworked into Final Fantasy XV. As the camera pans across landmarks seen in the reveal trailer for Versus XIII, we hear the familiar notes of Somnus, the theme that eventually became XV’s main menu music.

While this post-credits sequence is scarcely more than two minutes long, it gives us a hell of a lot to unpack. Seeing the characters of Kingdom Hearts in a distinctly realistic setting is bizarre, to say the least, and small details such as the realistic stitching on Sora’s clothes and the slightly more natural proportions of his face have led many fans to speculate that a very different future lies in store for the franchise. To add fuel to the theory fire, Sora has already had run-ins with the cast of The World Ends With You, another Square Enix title set in Tokyo. Could this mean the door is open for Kingdom Hearts to journey to the worlds of Final Fantasy as well? Anything is possible. Especially when your characters routinely skip between universes.

Read more: Pass the time with the best RPGs on PC

If Nomura plans to redo Versus XIII with the Kingdom Hearts heroes, this could point to a future for the series that is separate from Disney, therefore opening it up to a more adult audience. Given how committed Square Enix has recently been in bringing its titles to PC, this new era for the series could be the perfect time to make the leap.

Did… did I just try to explain the plot of Kingdom Hearts to a PC gaming audience?!

Whew! This was more exhausting than a zero-XP run of Kefka’s Tower! That’s just about every possible reality I can think of for the next Final Fantasy game. Now, if you don’t mind, I’ll be popping on my tinfoil hat and waiting for a Square Enix exec to politely tell me to be excited for E3.