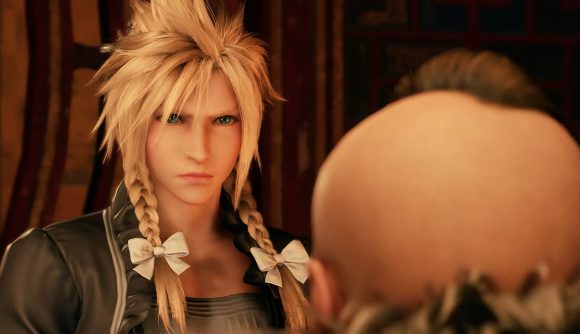 Square Enix has just dropped a meaty new trailer for the Final Fantasy 7 Remake. Clocking in at almost four minutes, it features a new and very chilled song by the original game’s (brilliant) composer Nobuo Uematsu, and gives the remake’s take on a couple of iconic moments from the game. Perhaps most notably, these include the moment Cloud dresses as a woman to gain the confidence of crime lord Don Corneo.

Since the remake was announced and its modern, realistic aesthetic was revealed, there has been speculation as to how it would handle this. In the original game, with its bright colours and blocky visual style, the moment is played for laughs, with the cartoonishly amorous Don Corneo bouncing across the bed on all fours, with accompanying springboard sound effects.

It’s difficult to imagine a direct translation of the surreal scene in the remake given its more realistic style and seemingly darker tone, but it looks like Square Enix is tackling the challenge head on. As you can see at 1:05 in the new trailer below, Cloud can wear make up, pig tails, and a flowing black dress.

The owner of the Honey Bee Inn – Don Corneo’s favourite exotic dance club and brothel – also has a positive message: “True beauty is an expression of the heart, a thing without shame, to which notions of gender don’t apply.”

The rest of the trailer is full of treats for Final Fantasy fans who’ve been wondering how the remake would handle certain moments from the original. Among the highlights are Red XIII’s dignified voice, the Choco/Mog and Leviathan (wow) summons, and one of the Jenova boss fights, though there are many more.

If you moonlight on PlayStation, the FF7 remake release date has been pushed back to April 10. And if you’re wondering why we’re covering this at all, it’s because it will probably get a PC release at some point. There were plenty of hints of this in the code of a PSN demo, and hints on the box art that its PS4 exclusivity has a deadline.