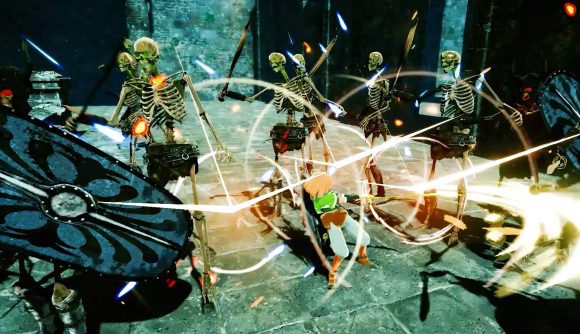 A new month has dawned, and September will see another round of games added to Xbox’s subscription service on PC. Early this month, players have a nice selection of new and classic games to look forward to on the platform, including Final Fantasy XIII, Craftopia, Surgeon Simulator, and Nuclear Throne.

September 2 (that’s tomorrow, as of this writing), we’ll see sandbox game Craftopia arrive on Game Pass, in ‘game preview’ form due to its Early Access status. Dustin has described Craftopia as “Minecraft meets Zelda: Breath of the Wild with tanks,” to which I’d only add the note that there are also colossal Dune-style sandworms in there, too.

We’ll also see Final Fantasy XIII arrive September 2, and that’s the entry in the long-running RPG game series that introduced us to Lightning, Snow Villiers, Oerba Dia Vanille, and the rest of the gang adventuring across the world of Gran Pulse. It’s a more linear game than many of the Final Fantasy games that came before it, but its battle system was a huge hit with fans and critics.

September 2’s additions are rounded out with RPG card game Signs of the Sojourner and the madcap antics of Surgeon Simulator 2.

Next week, September 7 will see the roguelike dungeon-crawler Crown Trick arrive on Game Pass for PC. Here you’ll need to plan each step carefully, because the monsters – and even the labyrinth itself – will move each time you do.

Company of Heroes 2, Disgaea 4, Forza Motorsport 7, and The Dark Crystal: Age of Resistance Tactics will all be leaving Game Pass for PC September 15, so get your time in with those games while you still can. If you’re console-based and keen to check out the best Xbox Series X games to play in 2021, our sister site The Loadout has you covered.