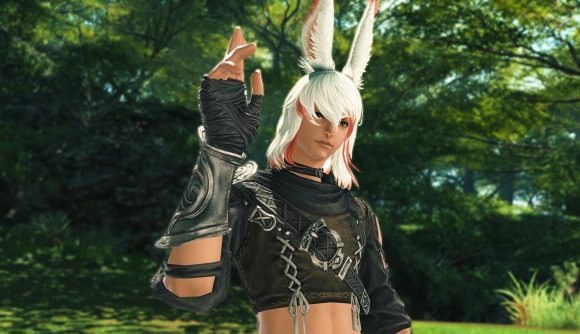 Back when Final Fantasy XIV’s Shadowbringers expansion released, we got the bunny-like Viera and beast-like Hrothgar as new, playable races. The problem, though, was that the Viera race was locked to female characters, and Hrothgars could only be male. Fans – us included! – called for greater customisation options in creating their characters, and Square Enix obliged, revealing that male Viera and female Hrothgar would be coming to FFXIV after all. It turns out, though, that we’re getting those options because the game’s graphics team used their free time to see if they could make it happen.

Final Fantasy XIV director Naoki Yoshida explains in an interview with PlayStation Blog that adding new races comes with heaps of considerations. You don’t just create them – you have to factor in and tweak how they interact with particular environments and armour.

“Adding a playable race does not end with just the initial resources needed to create the race (i.e. character modelling; preparations for variations in facial features, hairstyles and head shapes; animations that are unique to each race, etc.),” he explains. “Even following initial implementation, the tasks required with each patch update will multiply. For example, when we implemented the Viera, because their ears are very long, we needed to add a new review flow to check how Viera characters would appear on screen in all cutscenes.”

Because of the work that involves, we only got the female Viera and male Hrothgar as that’s all the team had the bandwidth for. That didn’t put off Final Fantasy 14’s graphics team, though, who wanted to explore all the options available to see if they could figure out a way to broaden the gender options for the new races.

“They spent over half a year using what free time they had in between their normal work on the patches to consider ways to add another playable race,” Yoshida explains. “From this, they concluded that we could probably squeeze in just one more at this time. Of course, by adding male Viera now, we anticipated people may be vocal about the absence of female Hrothgar and want to know what the situation was.

“Rather than waiting until (hypothetically) 7.0 to add two playable races at the same time, we realised we could actually ease the impact on our resources if we implemented these one at a time.

More? Here are the best MMORPGs on PC

“Ultimately, I decided we should then move forward with implementing one playable race at a time, and I will make sure to explain that to our players: that’s what we did for this upcoming expansion.”

The Final Fantasy XIV Endwalker release date is set for November, so you don’t have too long to wait. In the meantime, though, we also got the chance to speak to Yoshida ourselves, who tells us that “without World of Warcraft, Final Fantasy XIV’s recovery wouldn’t have been possible”.