As with all complex sports – from basketball to rugby, cricket to chess – football is about the gathering, interpreting, and using of information. You might be the most talented manager in charge of the most talented players, but if you are not seeking out and executing the right information then you are going to find yourself acting in a way that is inefficient and, potentially, counterproductive.

The wealth of information a manager has to deal with in the modern game is almost overwhelming. It’s not just transfers and team selection that need to be kept track of and controlled; it is also the interpersonal relationships of players and staff, the minutiae of team tactics, communicating with the board and fans, preventing injuries ruining the season and more.

That is why Football Manager’s task of simulating the beautiful game becomes more challenging with each passing season. The developers at Sports Interactive need not only to simulate these realities, they need to present them to players in such a way as to be easily understood and interacted with. In this area, Football Manager 2018 appears to have made great strides, with tweaks to how tactics, injuries, and relationships are handled among the most striking changes.

This year’s instalment is more intuitive thanks to more charismatic presentation – the cliché that playing Football Manager is akin to managing a spreadsheet is less accurate than it has ever been. 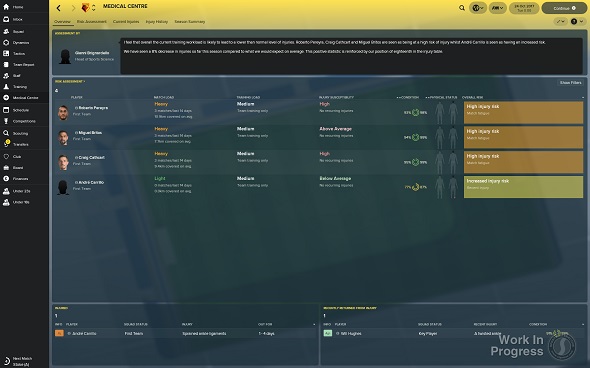 “People change over time and over generations. According to every study I’ve read, the newer generation coming in has lower attention spans compared to older people – to the point that they watch lots of five-minute YouTube videos instead of 30-minute TV shows.”

The tactics screen, for instance, now breaks the pitch into a number of distinct, square zones. At first glance it makes the whole overview look decidedly more complicated – something of the sort that Pep Guardiola would trust showing only his more intelligent players – but very quickly you realise that the added information makes diagnosing tactical pros and cons easier.

If the square zone is coloured in vivid green then your players are doing a good job at imposing themselves in this area. Should the zone take on a reddish hue then they are failing.

It might be that an area in red represents no problem for the tactical approach you are taking. You might actively abandon the middle of the pitch when in possession of the ball if you are focusing on lightning-fast counterattacks down the wings, for instance. Conversely, a lack of representation in any single area of the pitch could be a major problem if you are playing a possession-focused game. How you digest, choose, and use all this information is up to you. 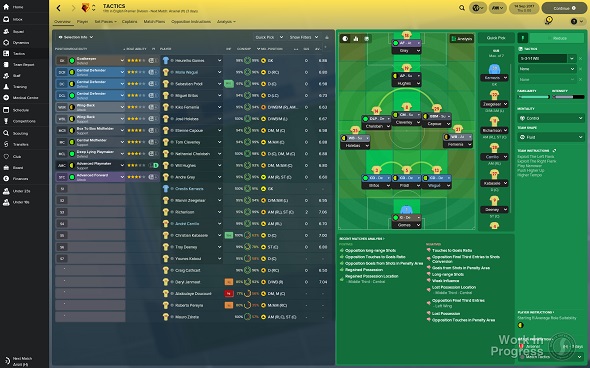 “The visual changes to tactics have a lot to do with educating people,” Jacobson says. “Pointing out where a tactic is going wrong, for example, isn’t something we’ve had in the game before.

“People tell me about their woes and about how they’ve got a brilliant tactical setup, but then they’ll also say that some bad event – like letting in goals from a certain area or at the same time in each game – happens to them. Well, then, in that case your tactic is not brilliant.

“You might be scoring a lot of goals, but that’s not great if you’re also conceding a lot. The changes to tactics are going to help with highlighting that kind of thing better because of the way things are presented.”

The depiction of injuries in Football Manager 2018 has also been made with a view to help players better understand them. Hopefully, this will lead to more shrewdly designed plans when it comes to keeping players on the field for the maximum number of minutes.

“We needed to find a way to better explain injuries to people and change the balance on injuries so that there are more smaller injuries occurring so people can learn that players do pick up knocks in training but still play at the weekend,” Jacobson tells me. 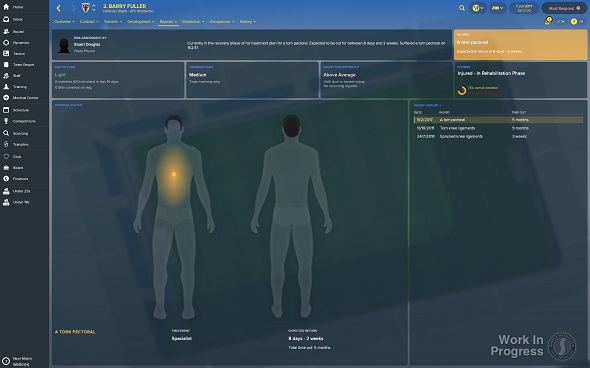 Player injuries are now shown using a model of the human body, with the afflicted area glowing red. This is supplemented with information on how regularly a player is injured, what percentage of the season they have missed, and if they have a history of recurring injuries.

“It’s about trying to move with the times, but also there’s no better way to describe injuries to people than highlighting the areas of the body that are affected,” Jacobson continues. “Unless you’ve got a biology degree or you’re a doctor you’re not going to know all of the different bones in the body and what their importance is.”

Such things can help not only in managing your own players but also in working out the risks involved in signing a certain individual. You might like the playing style of Danny Ings more than that of Troy Deeney in the context of your tactical setup, but if the former is going to spend half the season in the treatment room then you might want to think again.

Layered into every injury and tactical element is the new ‘Dynamics’ system, which is concerned with the depiction of squad harmony and the relationships and varying levels of power and influence enjoyed by each member of your squad. 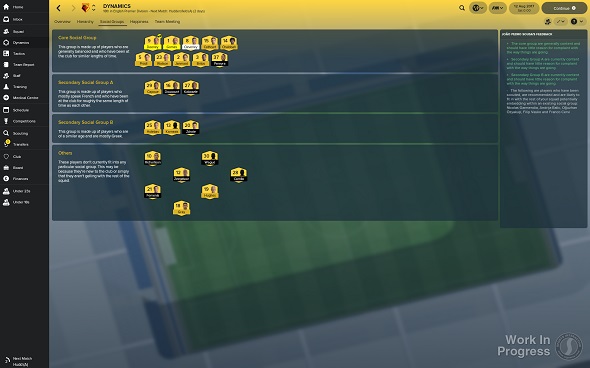 You might have the ‘perfect’ tactical approach, but if your team is beset by negativity and emotional imbalance then you are going to struggle to properly implement anything with any success.

“The Dynamics system is a very deep-rooted system and is there perhaps more for the people who see the game in a more story-based way,” Jacobson says.

“You’re able to see how partnerships between players are working or not working. If you’ve got two best mates playing together up front then you’re likely to play better with one another because there’s going to be more understanding there.

“You can also have situations in which two people hate each other and they’re still playing together up front, but they can still have a good partnership. There have been lots of examples of that over the years. Relationships are complex [and] they are such an important part of football.”

Much of what is shown across the new Dynamics screens has been part of games in the series before now, but, according to Jacobson, “players won’t have known about because it was all under the hood.” 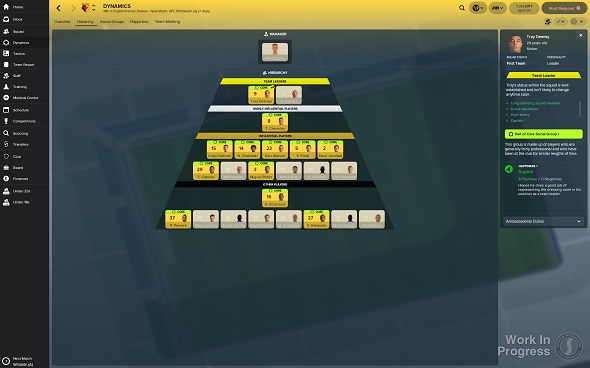 Bringing such elements to the surface ties into Football Manager 2018’s clear goal of allowing players more opportunity to digest and interpret information for themselves, and then come up with a plan of action.

A certain relationship in your squad might affect how you design a new tactic, only for the potential to aggravate a recurring injury to scupper such plans – at which point you might want to go back into the Dynamics and look for a new way to get the most out of your team.

The beauty of Sports Interactive’s approach to information provision is that it is all about giving you more ways to intelligently react, as opposed to telling you how you should act. You might not always do the right thing, but you are given every chance to do yourthing.