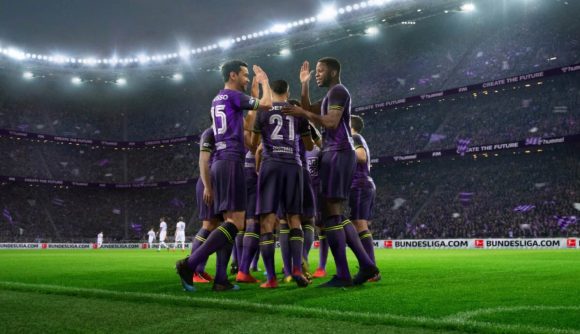 Where last year’s Football Manager 2020 added a depth of focus on club culture, the upcoming Football Manager 2021 has shifted its focus back onto you, the manager. Sports Interactive has revealed a new set of features coming to this year’s edition of its football management game that add all-new ways for you to interact with your players, the team as a whole, and with the press.

For instance: now you’ll be able to whip a water bottle across the dressing room during halftime speeches to underscore a particularly important point. It’s part of the new gestures system that Football Manager 21 is adding to the tone system that’s been part of the football game series for the past few years.

“This really is an evolution of that and allows you to communicate in a much more varied way, and with more nuance, across different situations,” explains Tom Davidson, PR manager for Sports Interactive. The gesture system is context-sensitive, giving you different options depending on whether you’re talking to a player one-on-one, being interviewed by a journalist, or talking to the team at halftime.

The gestures you use can set the tone for what transpires in your interactions, Davidson says. Calling a player in for a disciplinary discussion, you can use negative gestures to show that you’re not messing around – this is serious. In press conferences, you’ll have a completely different set of gestures available that range from laughing and smiling warmly to angrily pounding the table and wagging your finger. 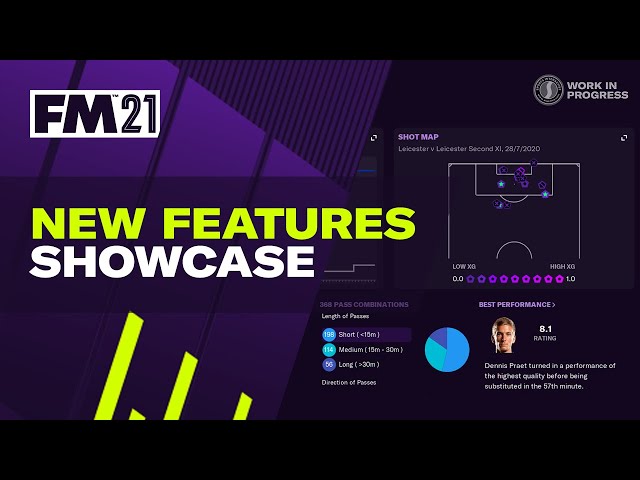 As with the tone system, selecting certain gestures will limit your available responses in a given situation – using a positive gesture like a warm smile will prevent you from using the more shouty options, and you won’t be able to tell everyone they’ve been doing a great job while you’re sending a Hydro Flask whistling over Paul Pogba’s head in the locker room.

Another new communications feature is Quick Chats, which give you additional opportunities to interact with players and journalists. “These really represent those short, quick, and informal conversations that take place, maybe in the training ground corridor, maybe just a few quick words at the stadium, or whatever scenario it is that’s outside of a formal one-to-one meeting,” Davidson says. These can be in-person chats, but they can also happen remotely – essentially, Football Manager’s version of apps like WhatsApp or SMS. You might want to use Quick Chats to ask someone to recommend a new member of staff, or to reply to a quick question from a reporter. 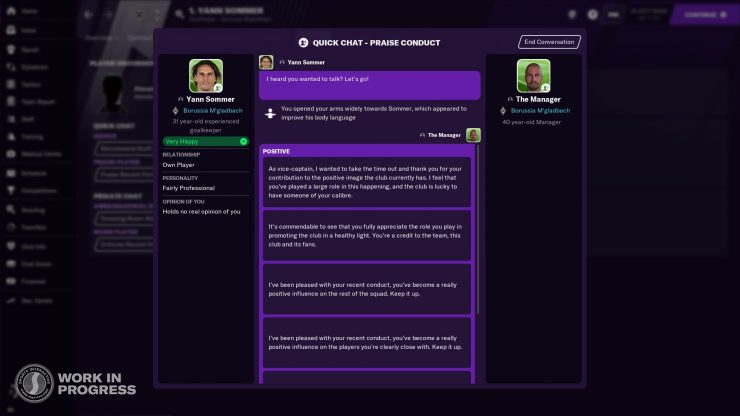 Davidson says he’s used the feature when he’s had players out on loan who have been growing dissatisfied with the amount of playing time they’ve been getting – using Quick Chats, he can send a short message to the assistant manager to ask about getting them some more time on the field.

There’s an all-new UI for press conferences in FM21 that lets you see each individual journalist in attendance, and you’ll be able to read their reactions to what’s being said as the conference progresses, much the way you can currently get a sense of how individual players are reacting to dressing room talks. Redesigned info panels will provide additional context to help you make informed responses to questions, and you’ll have help in the form of a more capable press officer.

Prior to press conferences, you’ll get a briefing from your press officer that gives you a rundown on the media who will be in attendance, their level of prestige, and the topics they’re likely to ask you to discuss and potentially expand upon. You’ll also be briefed on topics that the club’s board wants you to avoid – and ignoring these directives will obviously have an impact on the board’s confidence in you.

Match day has seen a host of improvements as well, above and beyond the expected enhancements to graphics and animation. The UI has had a redesign that lets you change mentality on the fly, make substitutions, and issue instructions in a more intuitive way. You’ll also be seeing more up-to-the-moment information and analysis during matches – “You’re being overrun at mid-field” won’t be the only thing you’re hearing in FM21. 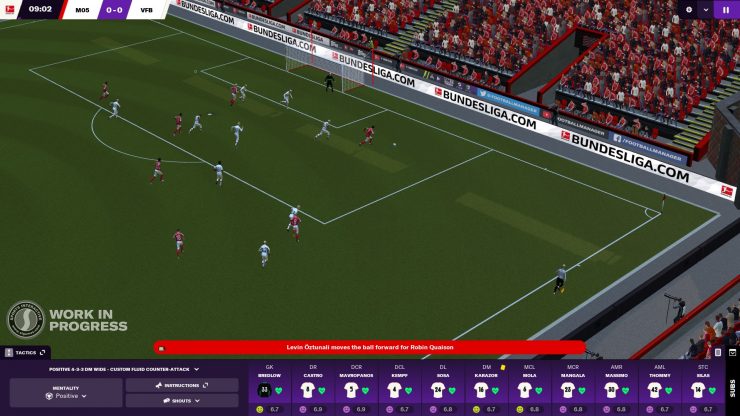 To that point, Football Manager 21 is also introducing an xG system, and it’s one Sports Interactive has produced in-house. “We’ve worked really hard on developing a system that goes beyond a lot of the current models that are out there,” Davidson says. Working with SciSports, a football data intelligence company, Sports Interactive has built an xG system that takes into account more of what’s happening on the pitch when it comes up with a number for expected goals. Rather than simply looking at player positioning, FM21’s xG system accounts for height of the ball when the shot is taken and when the player receives it, defender positioning, goalkeeper positioning, and even the positions of teammates in its calculations. At half-time and fulltime, you’ll be able to look back at how xG has shifted over the course of the match and find out where things have turned against you or to your team’s advantage.

FM21 has also seen a lot of attention paid to recruitment, and Davidson says Sports Interactive has worked closely with clubs, managers, scouts, directors, and analysts to build a system representative of the modern system of managers and recruitment staff working closer together than ever. You’ll have recruitment meetings ahead of transfer windows to build a recruiting strategy, identifying areas of weakness and players you want to bring onto the squad. You can tailor your recruiting strategy based on insights from your staff, and set it to look to strengthen specific positions or even bolster your dressing room culture. 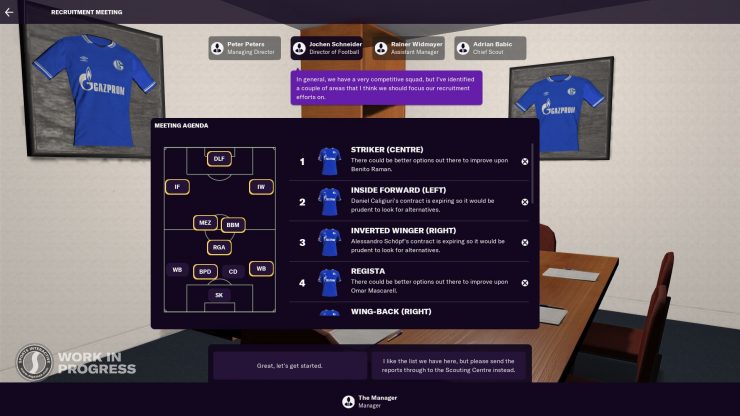 When each season winds down, regardless of whether you’ve brought home any silverware, you’ll be able to look at an end of season pack that takes you through the highlights – it’ll show you players who have joined, accolades won by the team and by individual players, goals of the month, and even financial inflection points for your club.

“It just ties things together in a nice little review that you can look back on with pride, hopefully, once you’ve got to the end of the season,” Davidson says. “It gives you a nice little bit of time to reflect before you start planning for the next season and working on how you’re going to bring those wunderkind onto your squad.”

Another new feature in this year’s Football Manager is a less pleasant one, and that’s the impact of COVID-19. Sports Interactive studio director Miles Jacobson had said when lockdowns first began that the pandemic wasn’t going to be included in FM20.

“We wanted it to be an escape for people,” Jacobson says. However, he pointed out that FM20 has served more than 18 million in-game advertisements for mental health charities this year, which have put help a click away for players who need it. “But we are also very mindful of the fact that we don’t want people to be out in the world, having to deal with the situation that’s going on with the pandemic, and then having to deal with it when they’re playing our game as well. We don’t think that’s healthy.” 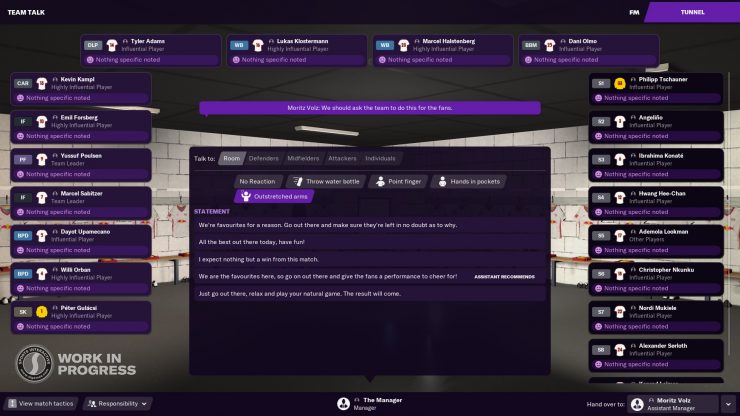 That said, Football Manager 2021 will reflect the effects of the pandemic on the amount of money available this season, as well as on the international transfer market. But the pandemic has had an impact on the lives of the people playing Football Manager as well, and Jacobson said that’s had an effect on the way the studio has gone about developing this year’s edition.

“FM20 ended up being a much more important game for people than we thought any of our games ever would be,” he said, referring to the massively increased playtimes Football Manager has seen in the wake of long-term shutdowns around the world. “So it’s been blood, sweat, and tears throughout the development cycle this year … Last year, the theme of the game was long-term play, and we couldn’t have been more prescient if we tried on that. This year, it’s about giving the manager even more information to make their life a little bit easier.”

Players spending more of their time with Football Manager is something that Jacobson says Sports Interactive takes seriously. “We are aware of, but we are not weighed down by, our responsibility to players and playtimes,” he says. “We’re delighted with what the team have been working on, and we think that we will once again be releasing the best value-for-money game on the planet.”

The Football Manager 2021 release date (itself delayed somewhat due to COVID-19) is set for November 24, and on PC you’ll be able to find it on Steam and the Epic Games Store.