As I prepare for the 2021 season, I find myself surprisingly preoccupied with an Argentine’s right leg. Maxi Moralez isn’t present for training during the pre-season, thanks to an MCL injury and a sprain suffered in the final quarter of last year, and I’m missing his influence both on the pitch and in the dressing room. As the new, utterly clueless manager of NYCFC, I’d been counting on frasquito to help paper over the mistakes I was inevitably going to make in my first season of Football Manager 2021.

I’ll credit Football Manager 2021 with this: it’s made a football fan out of me, which is something I think Sports Interactive can be fairly proud of. As an American, my exposure to football (and by extension football games) has been very limited. Here, the sport is still regarded with a fair degree of suspicion and called ‘soccer’ – this is to distinguish it from American football, which is a game about armoured men carrying and throwing a ball that takes place during the gaps between long stretches of advertisements for low-carb beer, defence contractors, and treatments for erectile dysfunction.

But while my experience with football isn’t naturally deep, I’ve made it my mission to understand the sport since we began covering Football Manager 2021. I’ve led medieval dynasties through simulation games like Crusader Kings III, how much harder could running a football club be? Given the opportunity to review this year’s version of the premier football game, I wanted to find the answers to the following questions: first, can you learn football by playing Football Manager? Second, is that something worth doing if you’ve never played before? And finally, does this year’s edition add anything to make that experience better?

I’m pleased to report that the answer to all of these questions is ‘yes,’ although it’s not an unqualified yes. As in most years, veterans of the series will find all the important stuff right where they left it – FM21 is very much like FM20, which I’m told is very much like the Football Managers that have come before. 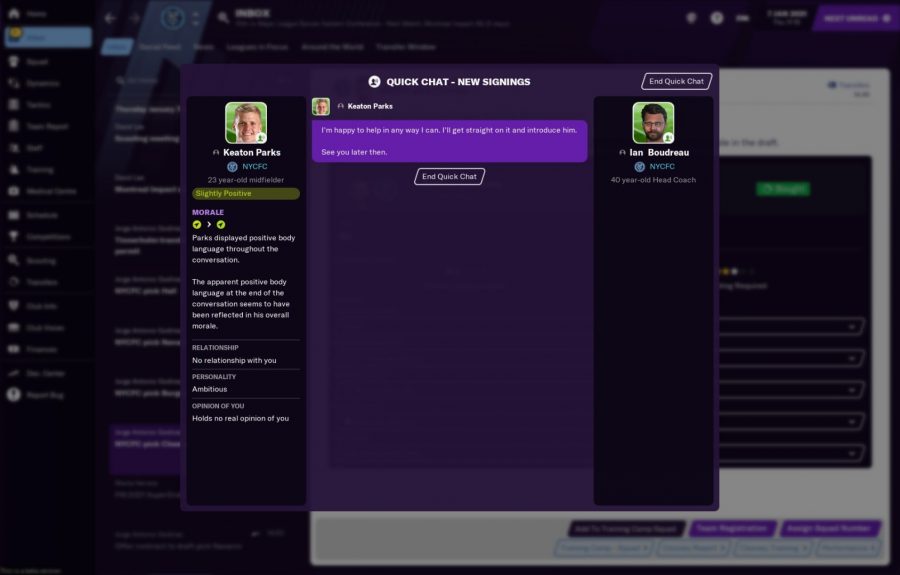 This year’s focus, Sports Interactive has told us, is on you – the newly minted manager of whichever football organisation you choose. That’s driven a host of changes that touch a lot of the game, although much of it is in subtle ways that don’t have an immediately apparent impact on the moment-to-moment experience of responding to emails, sorting through scouting prospects, and picking tactics and teams.

THIS YEAR'S FOCUS IS ON YOU, THE NEWLY MINTED MANAGER OF WHICHEVER FOOTBALL CLUB YOU CHOOSE

The new ‘Quick Chats’ and ‘Gestures’ systems are interesting enough on paper, but in the beta build of FM21 I’ve been playing, both are a bit unreliable. An assistant coach might suggest I speak to a player about his development, but that option isn’t always available when I go to strike up a conversation. Gestures – such as throwing water bottles across the dressing room – suffer in many cases from vagueness that often has made them more frustrating to use than the simpler tone system of the past. It’s a problem that also exists with the touchline shouts – what exactly am I saying when I ‘encourage’ a player? Football Manager is about role-playing, and this ambiguity in communication can be a serious hindrance to that aspect of the game.

So while I like the idea of gestures in concept, in practice I find that they require another level of interpretation to use effectively. They’re not adding more clarity to the game, but rather another layer of obscurity to the one aspect of football that I should be able to understand intuitively: human beings communicating with each other. 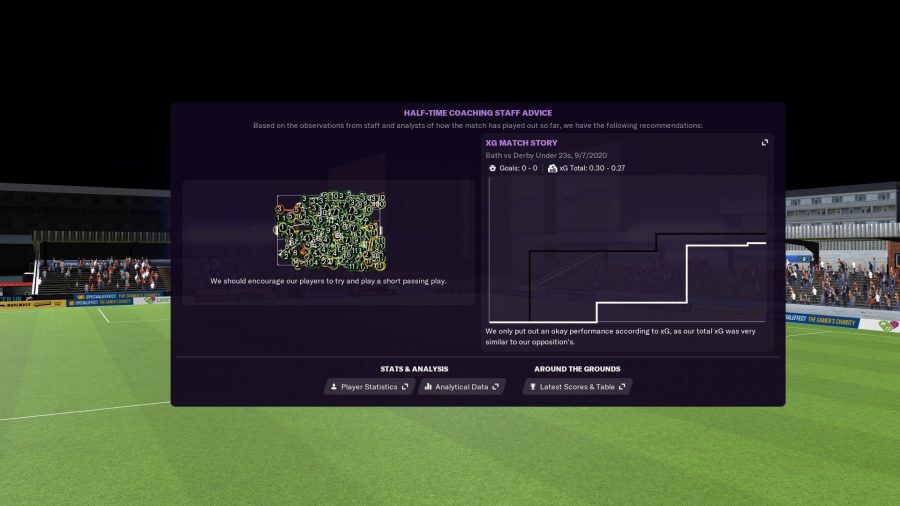 What does add clarity, however, is the newly introduced xG (expected goals) statistic that tracks your team’s performance in matches with much more helpful granularity than the score can reflect. Calculated based on player position, teammate position, ball height, and a host of other variables the match engine is constantly crunching, xG tells a more complete story about your squad’s time on the pitch, even when your players end the day without a goal.

Many of the concerns I had as I played the beta version of FM21 have been peacefully laid to rest with the arrival of the day one patch. An unreadable passing chart that used to be presented at halftime has been replaced with the much more helpful shots on goal map, and the touchline controls that allow me to issue shouts, individual instructions, and substitutions for my squad now works like a charm.

This year’s match engine is where I find everything comes together – even though, in the beta stage, it’s not without its own flaws. There are still places where you see the graphics engine struggle to interpret the underlying math, and players still rotate like display mannequins without moving their feet during throw-ins, for example. But the overall effect of this year’s improvements is to create what I found to be a much more lifelike simulation of watching a real football match: animations are much more fluid, and players seem to make more realistic decisions about their positioning in formation. 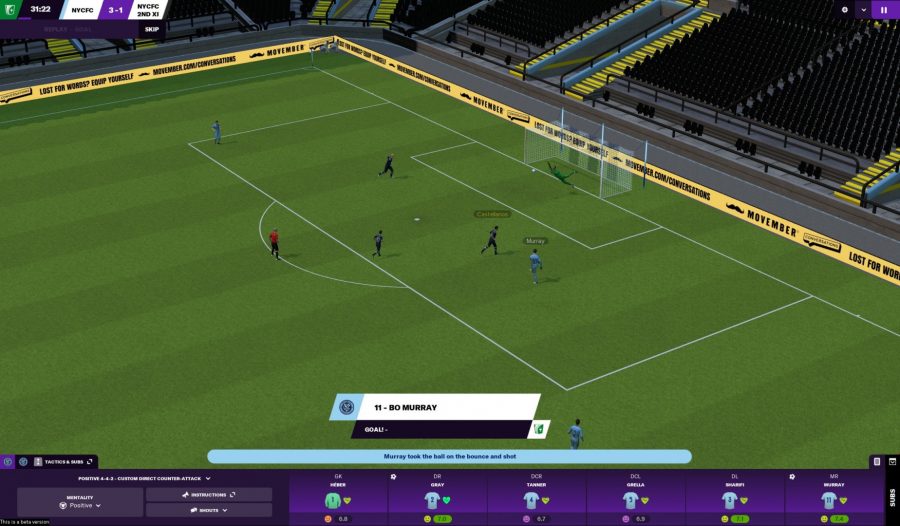 Perhaps most importantly, the movement of the ball itself has been improved tremendously. That, possibly more than any other individual factor, may be what pushes FM21’s match engine across the threshold of verisimilitude for me, to the point where I’ve most frequently felt compelled to watch full matches at normal speed, rather than sped-up highlights. I imagine that you’ll have to see this in action to get what I mean here, and it may not work for everyone.

FM21 hits a critical mass of realism which means that on game day, I'll grab a mug of coffee and settle in for the duration

For me, FM21 hits some critical mass of realism that makes it clear that the best way to learn about my squad is to see them in action, watching (and often, shouting) from the sidelines as their training, mental preparedness, and interpersonal dynamics all come together into a single performance. When it’s game day, I like to tilt my chair back, grab a big mug of coffee, and settle in for the duration.

In my current season, I’ve taken the reins as manager of Bath City FC, as a way to connect in some strange way with my colleagues in PCGamesN’s hometown. A scrappy gang of semi-pros with a couple of grizzled veterans and a neglected youth organisation, the Bath squad got off to a rough start with me when I managed to give a thoroughly depressing introductory speech my first day on the job. I’d mildly suggested that we temper expectations for the season and try to make it to the knockout rounds of the regional cup, and the players left hating my guts – they felt I was being unambitious and, worse, disrespecting their hard work and ability. 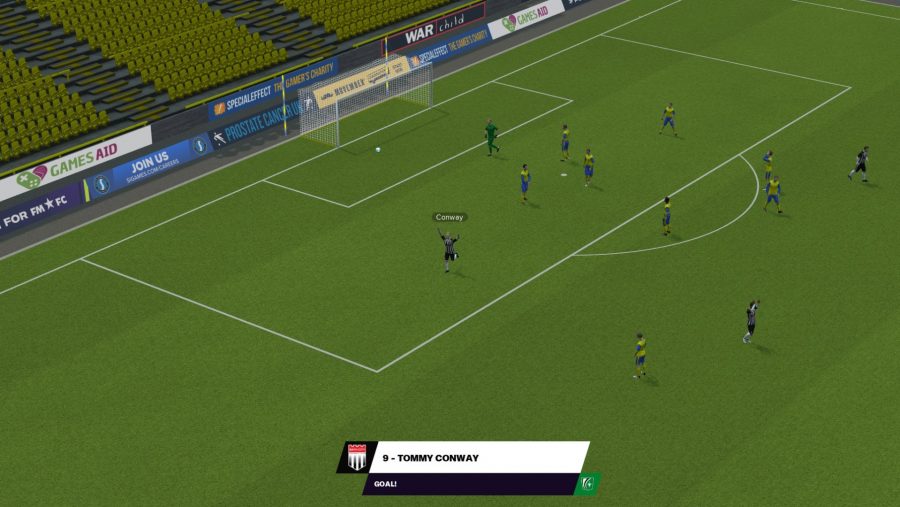 It took months – almost the entire pre-season, in fact – to regain their confidence and repair the noxious atmosphere I’d introduced to the dressing room. I tried being an encouraging soccer dad from the sidelines, which only managed to further disillusion the squad. Inspirational speeches before friendly matches were met with yawns. It wasn’t until I started pulling players aside to criticise poor performances in training – and standing my ground when they pushed back – that some of the team’s leaders began to think I might be worth their time. I made some adjustments to the training schedule, giving our goalkeeper some extra focus on technique, and we worked on our atrocious passing. The mood in the club was improving, and I even managed to sign a couple of promising centre-backs to deepen a glaring weakness on the bench. The mentorship group was starting to pay off, and more of the guys were spending free time together.

One of the final games of the pre-season pit us against Haringey Borough. The team had been improving, but still hadn’t quite gelled. I decided to replace one of the regular Thursday practice sessions with a team outing. I have no idea what the lads got up to during that trip, but I prefer to imagine they visited the Jane Austen Centre, which is just around the corner from the PCGamesN offices. Whatever the case, they returned to the club with a collective head full of steam, and went on to hold Haringey to a hard-fought 2-2 tie. 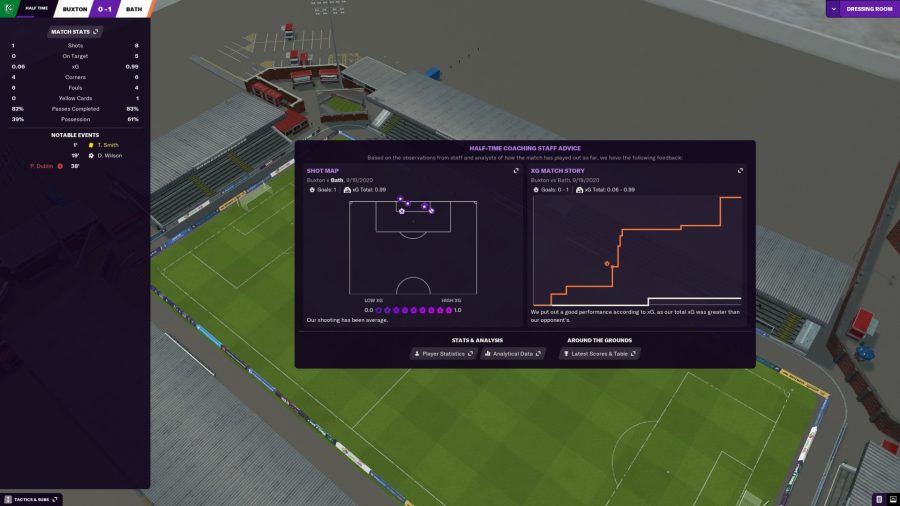 It really was something to watch them out there, too. These were guys who had begun the season barely willing to look at me, with several of the older players considering moves off the team or into coaching. Now here they were, deftly knocking long through passes to the wings and even managing the occasional lofted cross. This was by no means good football I was watching, but it was a damn sight better than it had been when practice had gotten underway in January. As the rain began falling on the field in the waning minutes of the second half, I felt a genuine sense of pride. We were ready, and I couldn’t wait to see the season opener.

Same same but different: Check out our FM20 review

In the end, I think this is why you should probably play Football Manager 2021. Not because of its new list of features (some of which are very good) and not because it’s an improvement over last year’s edition (which it is). It’s because there are precious few games out there that can impart this particular kind of pride of accomplishment, the kind you get from inspiring someone else to do a better job, or a team to work better together. I’ve been learning as much as I can about football over the past couple months, running drills in eFootball PES 2021 and roaring down the pitch for counter-attacks in FIFA 21. Those have been plenty of fun, but neither game can really hold a candle to the sense of well-earned accomplishment found in Football Manager 2021 – whether you’re hoisting a cup at the end of the season or not.

It still has its quirks, but this year's Football Manager is the best one yet.